I caught the Ballet Across America program curated by Misty Copeland on its final night. The first dance on Copeland’s program was Concerto by the Nashville Ballet, choreographed by Artistic Director Paul Vasterling to music composed by Ben Folds (Concerto for Piano and Orchestra, performed by Joel Ayau with the Kennedy Center Opera House Orchestra conducted by Nathan Fifield). Concerto was also part of the opening night gala, although on that evening Ben Folds himself played the piano. Upon my second viewing, I noted improvement. The dancers looked more at home on the stage, and they danced with greater unity and clarity.

While Concerto, to me, is overly busy and unfocused, I appreciated having the chance to see it. By choosing the Nashville Ballet to be part of Ballet Across America, Copeland surely intended to give attention to one of its company members, Kayla Rowser, another young African-American female ballet dancer. Rowser is a dynamic ballerina, and when she joined the cast during the second part of Concerto, I definitely took note. The costumes in parts one and three are all black, but the leads for the second part wear peacock green (Owen Thorne and Jon Upleger), and ice blue (Rowser). I’m not sure why the colors change, but even without the new hues, Rowser is a breath of fresh air. 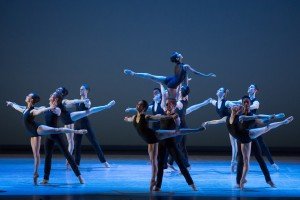 I did like how Vasterling maneuvers a large cast (25 dancers) and how the movement in Concerto tracks the alternating moods of the music. A lot of the dancing looks like variations of social dance, with some jazz thrown in, with kind of a Broadway feeling. Dancers strut with one arm high in the air. At one point, there are two rows of dancers at the back of the stage. Women bend over the men in line in front of them, who are linked together like a fence, and the women’s straight arms plunk up and down over the arms of the men like piano keys. It’s a humorous and clever moment.

The second piece on Copeland’s program was MADIBA by The Black Iris Project, choreographed by Artistic Director Jeremy McQueen to music of the same name by Carman Moore. Both the music and dancing are inspired by the life and legacy of Nelson Mandela. It was special to see Washington Ballet’s own Andile Ndlovu, from South Africa, take on the role of Mandela. The ballet unfolds a little like a children’s fairytale. There are light-skinned military officers and guards, and then there are Black South Africans, Mandela’s family, and a pair of dark-skinned blue cranes. The characters are clearly defined, the violence is pretty tame, and yes, there’s a happy ending. 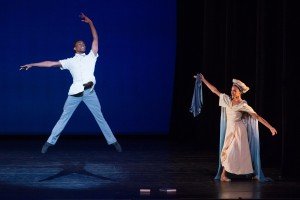 It’s obviously difficult to capture Mandela’s life in a short ballet, but MADIBA covers the basics. The ballet begins with a woman standing on a stool, holding a baby. She’s Mandela’s mother, cradling her son. In a nice parallel later in the ballet, Mandela, grown up, stands on a stool, too, facing the same direction his mother had, raising his fist and inspiring people. Although the movement is deeply rooted in classical ballet, there are exceptions. The women slap their hips and clap.

The Black Iris Project, founded by McQueen in 2016, “is a ballet collaborative and education vehicle creating relevant classical works that celebrate diversity and black history.” While I wasn’t blown away by the choreography in MADIBA, I do recognize the incredible importance of presenting minority stories and artists on the ballet stage. Doubtless there are youths of color who will see works by The Black Iris Project, performed by dancers who look like them, and will aspire to be future ballet dancers because they see the relevance and possibility of this career path. 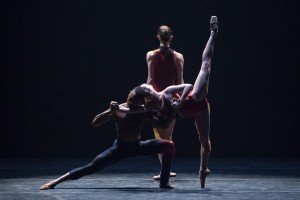 Closing Copeland’s curated program was Star Dust by Complexions Contemporary Ballet, choreographed by Co-Artistic Director Dwight Rhoden. Star Dust has to be a closing work, as its energy leads the audience to its feet, clamoring for more and talking animatedly about the performance. I completely understand why some dance critics might pan this piece — there’s a lot of drama, a lot of hyperextensions, relentless hurling of bodies. You could call it a mess and not be wrong, but in my eyes it’s a glorious, heartfelt mess, utterly entertaining and engaging.

Star Dust, which premiered in May 2016, is a tribute to David Bowie. Bowie’s music strikes nerves. I doubt it strikes many people, however, as the perfect music to accompany a ballet. But Rhoden and his dancers brilliantly transfer the emotion and brashness of Bowie to the stage. The multicolored costume design by Christine Darch and lighting design by Michael Korsch add a lot to the production.  The punk makeup and hair styles, as well, help paint the rock and roll scene. The dancers look strong and wild and proud, like Bowie. 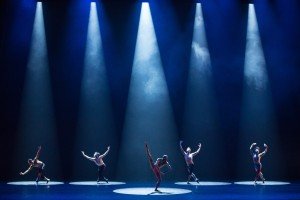 Among the most compelling dancers I’ve seen lately is Terk Lewis Waters, who leads the company in the opening song, “Lazarus,” from Bowie’s 2016 Blackstar album. My eyes were glued to Waters whenever he was on stage. He moves with liquidity and muscularity, his body rapidly morphs between shapes. He’s elegant and hard edged, delicate and tough, and he epitomizes the love for Bowie that Star Dust imparts. Sergio Arranz, too, grabbed me in his lead turn in “Space Oddity.” Arranz pranced back and forth across the stage en pointe, sauntering and swinging his hips and shoulders, upright as an arrow.

Star Dust transports you from the opera house to a club, intimate and smoky and loud. There are waves of lights and a curtain of glittery streamers. The atmosphere makes you want to kick back and reach for a drink. Dancers lip sync Bowie’s lyrics, but it’s the dancing that really sings. That Star Dust utilizes ballet vocabulary is a shock, but it works. The dancers express unusually invigorating freedom through ballet, and it’s game changing. When they stand in a line to bid goodbye to Bowie, the Bowie figure throw his arms around a few them, locking them in hugs. It’s impossibly moving, but Rhoden knows better than to end there. Nor does Star Dust end when a Bowie figure keels over in an exhausted heap. The dancing continues, and by doing so delivers the message that Bowie’s music will live on.

Complexions: From Then To Now