I had the opportunity to see Ballet BC at Jacob’s Pillow several summers ago, and admired the company’s performance a great deal. The quality of the dancers was outstanding, as was the accessibility of the program. That is, the dances weren’t so esoteric or avant-garde that an average audience member couldn’t appreciate them.

Vancouver-based Ballet BC returned to the Joyce Theater this week with a program of three diverse dances – one  which it has been touring internationally in extended celebration of the company’s 30th anniversary. The company quality is still outstanding. And while two of the dances were choreographically uneven and not quite as pleasing to me as the ones I saw at the Pillow, the overall program presents the dancers’ virtuosity well, and can be appreciated without undue headscratching. 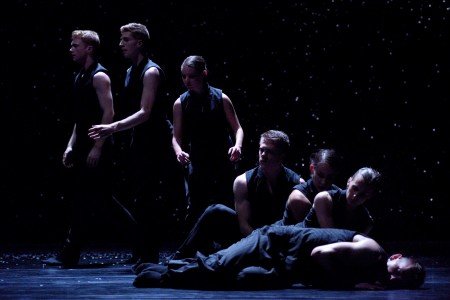 By far the most compelling of the three was the middle piece, Crystal Pite’s Solo Echo.

Created for Nederlands Dans Theater in 2012, Solo Echo is choreographically and visually stunning. The piece is inspired by a poem by Mark Strand – Lines for Winter – which is reprinted in the program. Reduced to its essence (which I recognize is not a fair or appropriate way to summarize poetry), Strand’s poem tells of a lone person in winter, existing but knowing nothing, finally recognizing who he is and coming to love that person. The poem reads a lot better than that summary, because it supports the essential theme with visual images that transport the reader to a place of quiet contemplation and self-examination – a starry winter sky, for example, or a moon gazing on a snow-filled valley.

Pite, a former member of Ballet BC who has become celebrated for her choreography worldwide, takes these images, the simple theme, and the accompanying score – excerpts from two cello sonatas by Johannes Brahms which fit Strand’s theme like a musical glove – and creates a dark, stark and lovely poetic night winterscape, complete with beautiful falling gold-tinged snowflakes projected against the rear curtain(the set and lighting design are, respectively, by Jay Gower Taylor and Tom Visser).

The choreography and the figures on stage reflect a search for identity, and a ‘you are not alone’ sense of support. But those phrases make the dance more trite-sounding, and more individually-focused, than it is. Several of the male dancers in the piece take turns as the individual, each of whom is eventually supported by others, but these ‘others’ are echoes of the featured dancer of the moment: echoes of the solo. We know this not only by the piece’s title, but also by the many images that show each dancer in the group seemingly as ‘alter-images’ of the one first in line – and in different ways each time). Notwithstanding the absence of a narrative, it’s an extraordinarily soulful, inspirational piece.

Aside from the accessible theme, what makes Solo Echo work as well as it does are the images that Pite creates, and that none of the choreography is generic or repetitious. Generally, the piece is filled dramatic arm gestures, pushing upward and outward (yearning), and inward (self-examination) almost simultaneously – these images made even more dramatic-looking  by the very intentional costuming (by Pite and Joke Vitter) that have the dancers’ black pants and tops visually merge into the dark background, but the uncovered arms (to the shoulders) highlighted by the same dark background. Yet more thrilling to watch unfold are isolated images of profound choreographic intelligence and beauty. One remembers in particular the dancers’ individual and collective silent screams of despair, and the lines of dancers appearing from behind one of them as if out of nowhere. All seven dancers in the cast (Emily Chessa, Alexis Fletcher, Kirsten Wicklund, Brandon Alley, Andrew Bartee, Scott Fowler and Christopher Von Riedemann) performed with emotional fervor and crystalline clarity.

16 + A Room, a 2013 piece choreographed by the company’s Artistic Director Emily Molnar, can be annoying the way I find William Forsythe pieces to be annoying – which shouldn’t be surprising since Molnar was a Forsythe Company soloist. The movement quality is filled with ticks, twitches, propeller arms, and lots of running back and forth. Dancers constantly move on and off stage, individually or in groups, contributing to the lack of cohesiveness.

But it does create a level of feverish excitement (exacerbated by the dramatic lighting effects, designed by Jordan Tuinman and directed by James Proudfoot), is interesting to watch, and avoids the trap of loving its movement so much that it never changes – there’s considerable variety to the virtually non-stop motion, and not every segment of the dance is at full throttle. But the repeated visual punctuations of a dancer holding a sign (“This is a Beginning”; “This is not the end”) look sophomoric rather than fun, and brought to mind the sign Forsythe displayed in his The Second Detail (“THE”). There, I think the sign was intended to mean something; here, it’s cute, but meaningless. The 16 dancers all performed with extravagant exuberance, but most memorable to me were those by the featured women: Livona Ellis, Rachel Meyer, Rachael Prince, Chessa, Fletcher, and Wicklund.

The most unusual dance on the program was Bill, a 2010 piece by Batsheva Dance veteran Sharon Eyal (her frequent collaborator Gai Behar is listed as co-choreographer in the 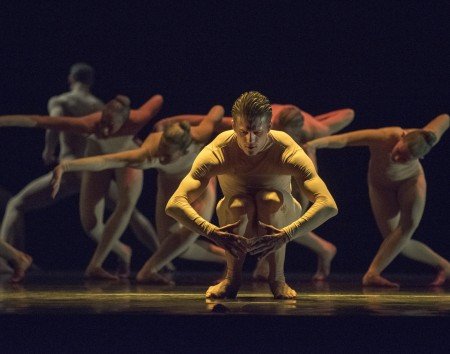 program, but not in publicity materials). One by one, four men, and then one woman, dance solos – each significantly different from the other. Each dancer is costumed in identical non-descript white unitards (designed by the choreographers) that are obviously intended to make the dancers virtually indistinguishable (other than by their faces) and sexually ambiguous (particularly Bartee, who began the solos appearing powerfully androgynous). Perhaps the dance’s title is intended to reflect this sense of ‘equality’ – the name “Bill” alone, doesn’t connote anything or anyone specific.

After the fifth solo, the remaining eleven dancers join the soloists, each wearing the same white unitard costume. The movement quality is tightly controlled thereafter, with featured dancers moving their bodies like human white gelatin molds: they shake, shimmy, slink, but largely stay in one area, backed up by the others who rock forward and back and forward and back constantly. The effect isn’t so much mesmerizing as curious, like it’s some extra-terrestrial tribal ritual – although a stage full of dancers in white unitards looks particularly striking. 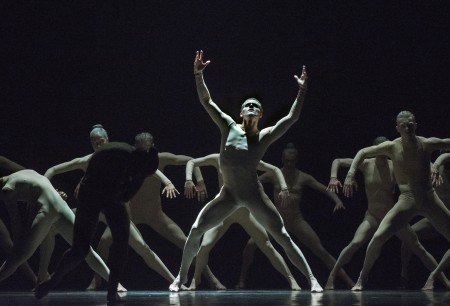 While these dances, overall, may have left an uneven impression, what is clear is that these Ballet BC dancers can handle anything that their Artistic Director throws their way, and present it in a way that makes even a less significant dance seem better than it is. That alone is reason to see this company again when it resurfaces in New York – or at nearby Jacob’s Pillow.