Under the artistic directorship of Medhi Walerski, Ballet BC gave an eclectic performance of three pieces at the National Arts Centre (NAC) in Ottawa. With the easing of the pandemic restrictions on in-person performance, the NAC opened its theatre doors in November with limited seating capacity. The thrill of this live-return was felt throughout the hall. Showers of applause were given at the end of each piece as the company’s vitality electrified the stage.

The triple bill showcased innovative choreographies by both female and male artists. But the first and last pieces bookended the most original of the three.

The opening piece, GARDEN, created by Walerski and choreographed in 2016 for the Nederlands Dans Theatre (NDC), begins with a woman standing behind a grey shimmering curtain as her eyes glitter, emitting shiny crystals through the lighting by Theun Mosk. The sparkles announce the magic to happen in this polished and exquisite work, inspired by the interplay between the strings and piano in Camille Saint-Saëns’s “Piano Quintet in A minor, Op. 14.”

A brief solo by Anna Bekirova ensues. Her expressive and charismatic dancing sets the mood. Then a sequence of separate duets begins. With beauty and finesse, the choreography highlights the notes of the piano. The final duo, Livona Ellis and Justin Rapaport, magnificently shift the tempo to slow motion. The grey curtain descends again, and Rapaport (J. Rapaport) dances alone.

Next, ten dancers dynamize the strings of the music through invigorating and graceful sets of whirling pas de deux, trios, quartets and group formations. A refined labyrinth of movement is carved in space. Suddenly, in this ethereal maze of figures, three male dancers lift Kiana Jung, displaying her body and their masculine dominance in a gendered formation evoking those of the grand story ballets. 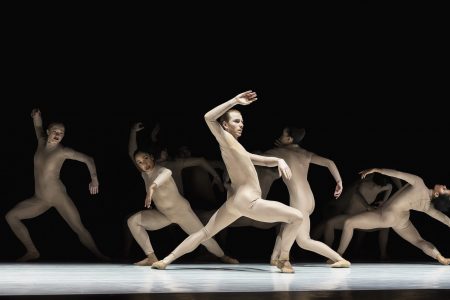 Such recurring classical representations give way to contemporary vernacular. Ballet lines, holds and patterns are repeatedly and gently reshaped through the angularity of bent knees and elbows and flexed feet as well as softly undulating backs, arms and hands. Resonating within this fluid and flowing juxtaposition is movement as essence.

This meditation upon the body and its moves as the core of dance is materialized by the nude suits designed by Walerski and Joke Visser. They flicker in the lighting to become brilliant veneers of corporeal purity.

The final piece, Bedroom Folk, choreographed by Sharon Eyal and co-created by Gai Behar in 2015 for NDC, contemplates movement through a darker lens. Intense and erratic physicality, heighted by the pulsing sounds of Israeli DJ Ori Lichtik, reduces motion to automation and dehumanization.

The piece opens with twelve dancers clustered together as they constantly beat their right leg to throbbing techno sounds. Together they turn into a machine powered by this seemingly endless simple gesture. Later, they break away and flick their hands as they swivel on their toes. Their movements, resembling those of trapped insects or awkward alien creatures, transform again. This time they exude forceful but restricted physicality.

The group then reassembles in rows and stuns the audience with a series of deep and demanding pliés in second position, which chain their feet to the ground. They work in unison and become an engine fueled by the power of their legs. As the women dancers in the front row descend and rise, the impressive musculature of their thighs is laid bare – exposed in costumes by Rebecca Hytting and sculpted in lighting by Thierry Drefus and Alon Cohen.

Allusions to strife and conflict again thwart movement. The dancers huddle as if ravaged and destitute. The suffering of forced migrants or oppressed peoples is conjured by the figures’ slightly hunched and surrendered bodily stance, weighted slow walking and grimaces. Miriam Gittens, who appears injured or weak, is carefully and lovingly carried by a male dancer. Her passivity suddenly vanishes as she fiercely gnaws at Zenon Zubyk’s leg. The dancers encircle J. Rapaport and beat their heads in unison upon him. Horrific images of mob violence and scapegoating surface. Subsequently another dancer, Evan Rapaport, breaks from the group in an exquisite solo with strong and precise foot work. This is a momentary respite from the physical constraints of distress.

Narrative moments capturing the awakening and dissolution of humanity glimmer throughout the fervent and erratic mesh of gestures, steps and expressions. The outcome is a work radiating the sensations of pain, hardship, violence, frustration, affection, alienation and routine.

In the middle of the programming is Crystal Pite’s The Statement, choreographed in 2016 for the Zuiderstrandtheater. This work is a breathtaking example of Pite’s maverick theatrical dance style of connecting gestures to texts, which is central to her other work, including Betroffenheit (2015) and Revisor (2019). Movement’s relation to language is played out in this case through the politics and corruption seething within the bureaucratic world.

Doom emanates with the opening lines – “Oh God, Oh God, Oh God” – of Jonathan Young’s brilliant script, which is accompanied and enhanced by Owen Belton’s evocative score. The tragic story related through the fragmented recorded text is pieced together with an elaboration of everyday communication gestures and moves: tilted heads, hunched backs and pleading arms. They are brilliantly executed by four dancers, whose bodies breathe life into the words filling the stage.

The two characters (Ellis and Rae Strivastava) who work in a common department are requested by their two superiors upstairs (Bekirova and J. Rapaport) to produce a statement that blames that department for an incident leading to the loss of lives. But it is those in the head office who really have their hands dirty. The negotiations lead to a bureaucratic reshuffling. J. Rapaport’s character can no longer return to his former position upstairs, whereas the status and authority of the character played by Bekirova are bolstered.

Movement in all its shapes – bodily, musical and vocal – is ingeniously connected to the stillness of things. The massive inanimate conference table at the centre of the set designed by Jay Gower Taylor, with staging by Roger Van der Poel and Rena Narumi, “speaks” and “acts” in its relation with shifting figures, sounds and words. Agency is created through allusions to English-language plays on the word “table.”

In one instance, while standing with power and dominance on the top of the table, Bekirova, the remaining character from upstairs, acts out a recording of the woman’s caressing voice relating how clean and shiny both the piece of furniture and the room are. To these words, Bekirova points her finger and carefully glides one leg over the table’s surface. The deliberation in her slight gestures, the flippancy of the text, which contrasts with the gravity of the situation, and her action of standing on the table all merge. They show how the top administration’s request that the department provide the statement appears to be “on the table” or “open for discussion” when in fact it is not. It is an order from above. Meaning becomes slippery as Bekirova slides her leg over the table.

Later, the two members of the department appear crammed below the table, as if in a prison cell. Their apparent confinement “under the table” symbolizes that they are being forced to act “in secret.” The summons from upstairs to conceal who is really responsible for the tragic incident is concretized through the characters’ clever interaction with the stage prop.

The genius of Pite’s choreography resounds throughout. Not one gesture or bodily movement is ever superfluous or excessive. Every beat of movement, whether corporeal, textual or musical, is striking. Each builds upon the other with virtuosity and depth to carry the compelling narrative forward.

Bits of laughter could be heard in the hall. Some spectators at first found irony and humor in how the dancers’ moves intertwined with the tone of the script to express a workplace dynamic. A somber mood gradually took over in the hall as the seriousness of the cover-up unravelling in this boardroom hit hard.

The emotional response by audience members during The Statement was part of the discussion in the talk-back held in the hall after the performance. Walerski and Ballet BC artists Bekirova and Zubyk answered questions posed first by the NAC’s Livia Belcea and then by the public. Prompted by a showgoer’s query about whether Pite’s piece is supposed to be funny, Bekirova expressed her surprise at having heard laughter while she was performing its dreadful realities.

It was fascinating to hear how dancers on stage observe, listen to and react to their spectators, who are watching them perform live. This interchange, which was unreproducible in the live streaming embraced by NAC Dance during the pandemic lockdown, enriched the three pieces.

And the most cutting-edge work of the evening stood out. With its brilliant choreography and exceptional interpretation by the four dancers, Pite’s The Statement was the highlight.