Before Wednesday’s performance at the Joyce Theater, and despite its 45-year history, I had not previously seen Ballet Hispanico. Based on this program, that’s been my loss. The pieces are diverse and exciting, the company’s dancers are a wonder to watch, and the program includes one extraordinary dance that ranks among the finest of this or any other season – Bury Me Standing, by Ramon Oller.

None of the dances presented are new, or even relatively recent: in addition to the 1998 Oller piece, Club Havana and Flabbergast, created respectively in 2000 and 2001, were also on the program. But that doesn’t bother me any more than would New York City Ballet’s presenting an evening of dances by Balanchine or Robbins. Good dances are worth seeing anytime, as are dances that showcase the company’s dancers well and that are representative of the company’s versatility. 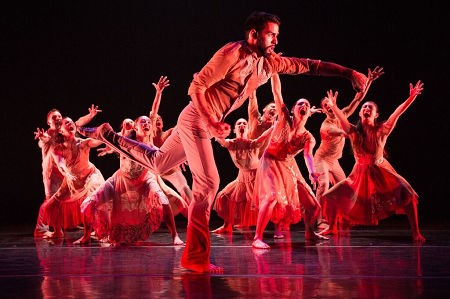 Bury Me Standing is a dance of epic proportions, and was executed by the BH dancers with the level of quality it requires, and deserves. According to the program notes, Oller, a Barcelona-based choreographer, was inspired by the trials and tribulations of the Romani people (often referred to as Gypsies, and currently grouped under the name ‘Roma’), a “marginalized community that has journeyed across continents for a thousand years.” I’m aware that the Romani, a people who emigrated out of Western India to Turkey, the Balkans, Eastern Europe, Spain, and thereafter to much of the Western world, have a history of being stereotyped and discriminated against. Like other such ‘different’ people, they were targets of Hitler’s World War II genocide. And unfortunately, the dance is as timely today as it was when it was created: while writing this, I read of a report issued this week finding U.N. responsibility for confining Roma people to contaminated ‘camps’ when the Kosovo War broke out in 1998, and keeping them confined there while they starved or became ill from the contamination – through to today. Plus ca change…

However, this piece isn’t about the Romani being discriminated against, at least not directly. Like other marginalized ethnic and/or religious groups, they have a culture and a history. The ballet is about that, as well as their struggle. But it’s also more than that. I keep referring to “like other such people” or “like other groups” because the Romani insulated culture and history is similar (though of course not identical) to that of other such groups. And to me, in addition to its intelligent presentation of somewhat elusive group characteristics and imbued attitudes, it is the dance’s universality that puts it at a higher level. As the background music (“traditional gypsy melodies” and flamenco music by Lole y Manuel), I heard not just gypsy melodies or a particular language, but folk melodies similar to those of other ethnic groups, and the suffering wail that knows no one tongue.

The costumes (designed by Aviad Arik Herman) are deceptively plain-looking pale peasant-like dresses for the women; pale slacks and shirts (when they wore them) for the men. The dance appears at first to be a series of straightforward connected dances, but like the costumes, which on closer examination are more detailed than they initially appear, it includes considerable tonal and choreographic variety. It’s structured and staged such that it moves seamlessly from group dances to solos to duets, from separate segments for the women and men, to segments that are more static and others that involve constant movement. And Oller makes skillful use of stage space: dancers gather in one corner or another while one of them dances separately, or they spill single-file across the stage from the wings as if emerging from a closed border.

Bury Me Standing is filled with heartache and anger (there’s a segment in which the women hiss at…whatever it is that’s oppressing them), and with group and individual angst. Some of the dances are sexually charged, but most are introspective on both an individual and group level, or representative of group suffering. Each segment is beautifully crafted, from the opening image of the Romani people emerging from…somewhere…as if from a low-hanging cloud, wandering from, or wandering to…somewhere; to the remarkable closing image of perseverance and futility in which all the dancers are presented in a square formation, facing the audience, with their legs running at top speed and their arms pumping, in perpetual motion but running in place – always going somewhere, but ultimately going nowhere.

The entire eleven-dancer cast (five men, six women) performed brilliantly, and isolating any individual dancer is difficult. That having been said, Diana Winfree and Christopher Bloom danced a breathtaking duet in which Winfree is held aloft and balanced in a variety of positions on her partner’s extremities while he’s prone on the stage floor using his torso and the floor to support his limbs – and her. It sounds like a circus act, but in addition to being astonishingly intricate, the duet was a model of liquid grace. I’m not sure why it was in the piece (except as an admirable change of pace) – possibly it’s emblematic of unquestioning reliance and muted passion – but it’s gorgeous to watch. A writhing, powerful solo that embodied both angst and determination was superbly executed by Johan Rivera Mendez. And the group’s leader, portrayed by Christopher Hernandez, dominated the stage. In this piece as well as the two others on the program, Hernandez impresses as BH’s Marcelo Gomes. Everything he danced was done with a level of intensity that set him apart (most of the company’s dancers display ‘intensity’, but his is palpable), and I could sense not a single out of place step or a failure to partner expertly. 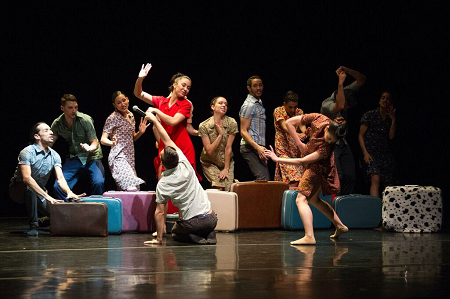 The other two pieces on the program were enjoyable and well-crafted, but not in the same league. The evening opened with the New York premiere of Flabbergast, choreographed by Gustavo Ramirez Sansano to music by Juan Garcia Esquivel. The dance was ‘inspired’ by Sansano’s experience of coming to America for the first time, and purportedly (per the program notes) “exposes with humor our stereotypes and preconceived ideas about new and foreign places.” The humor is there, but I didn’t see it as exposing stereotypes – if anything, it reinforces them. And from the translation of the shouted Spanish words that permeate much of the piece (A poem? Short story? Stream of consciousness? – it’s not credited), the setting is in Spain, not already in America.

Be that as it may, this is a fun dance filled with non-stop action (the only slow-down being a warm duet between a woman with a blue suitcase, Kimberly Van Woesik, and a man she imagines herself being with. Although there’s a similarity to the frenzied dances for the Sharks and their women companions in West Side Story (particularly one give-and-take segment that plays on ‘cha cha’ and ‘muchacha’), this isn’t Robbins. Limbs fly all over – mostly flailing arms leading the way for the torso that follows, and the energy level, and sense of boundless energy, could have lit Manhattan. Or Madrid.

Like the other dances on the program, Flabbergast is essentially an ensemble piece, but certain dancers had more featured roles. In addition to Hernandez, Bloom, and Winfree, I particularly enjoyed the vivacity of Kassandra Cruz, Melissa Fernandez, Shelby Colona, and Martina Calcagno.

The closing piece, Club Havana, is an entirely different kettle of choreography. It’s just as sizzling as Flabbergast (if not more so), but the movement is more controlled and the energy, and the passion, of which there is an abundance, simmers from within. 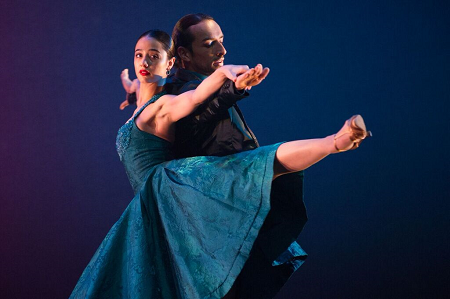 Choreographed by Pedro Ruiz to music by an assortment of composers (including Perez Prado, whose name might be recognizable to baby boomers), the piece takes place in a fictional nightclub in 1950s Havana. It’s divided into separate dances, opening with Son, a Cuban dance I not previously heard of, but which was popular in Havana and which reportedly spawned many other subsequent popular dance forms, including Salsa. The segment features the entire cast of five women/five men, and provided an energetic introduction to the dance forms that followed, which included the Mambo featuring three couples (dancing alone or in groups), the Cha Cha Cha (two men and one woman), followed by Bolero, and concluding with a combined Rhumba and Conga.

These dances don’t come across as flashy, because flashiness isn’t the point. Depending on the dance, precision, energy, and power (the power to concurrently tempt and resist) is. And as good as the opening and closing sequences were, it became masterful when the frenzy slowed to sizzle. It may have been a take on a Cuban nightclub, but it also was a ballroom (complete with hanging mirrorball), with exquisite demonstrations not just of the Mambo and Cha Cha Cha, but of choreography and staging.

In Mambo, three couples – Colona (in ‘formal’ on the town blue dress) and Lyvan Verdecia, Cruz (in yellow) and Joshua Winzeler, and Eila Valls (in turquoise) and Mario Ismael Espinoza, execute the steps perfectly, but there’s more going on than steps. Each of the three dances (for each couple) is somewhat different, each couple interacts differently, and the three couples are shuffled on, off, and around the stage skillfully. All three couples excelled, but Valls has a quality that sets her apart, and not just because she looks the ballerina. There’s an air of irresistibility and unattainability to her that makes her even more of a visual magnet than the others.

In the Cha Cha Cha, Fernandez, who had an extraordinary evening overall, expertly seduces her two companions. She’s not the centerpiece because she’s female, but because of how she uses her femininity (through Ruiz’s choreography). For example, as the men are standing next to each other, Fernandez, at first hidden behind the men, sneaks her lower leg between them, spreading the men apart just enough for her to slide between them – as the audience roars. In other segments, she achieves the same effect more obviously, moving like melted butter sandwiched between slices of Cuban bread. I confess that I enjoy watching the television program Dancing With the Stars, but the DWTS producers should consider inviting the Ballet Hispanico Stars to show how it’s really done.

My only quibble with the program was that there was no “ballet” (not just toe shoes and tutus, but recognizable ballet steps). But in the end, what matters more than how the dance is categorized is how it impacts the viewer. This program was dance, and Ballet Hispanico, at its best.

Ballet Hispánico: Home is Where the Hat is