When the curtain rose on opening night of Ballet Nacional de Cuba’s Don Quixote, I was confused. The curtain lifted to reveal a large white screen and no dancers. I remained confused when projected onto the screen were old black and white photos of a young girl. What a strange way to begin Don Quixote, I thought, until the identity of the girl on the screen became clear. It was Cuban prima ballerina assoluta and choreographer Alicia Alonso, General Director of the Ballet Nacional de Cuba. The short film, cleverly, was both a tribute to Alonso and to the Kennedy Center itself, which first hosted Alonso’s company on May 30, 1978, 40 years ago. Even more of a surprise than the film, however, was the announcement afterward directing the audience’s attention to a box in which 97-year-old Alonso stood in a gold sparkly outfit, turban, and sunglasses, and gracefully twisted and waved her arms. Although I quickly scooted out of the theater once the ballet finished, I understand that Alonso joined the cast for a curtsy. What an amazing living legacy she is! 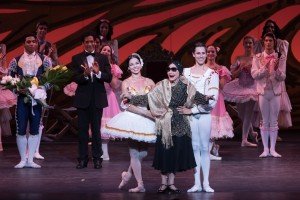 The energy and excitement that greeted Alonso continued with Act I. Like Alonso’s arms, the arms of the dancers moved precisely and beautifully. Veteran ballerina Viengsay Valdés danced the key role of Kitri. She swapped flirtatious smiles with her love interest, Basilio, danced by the vibrant and youthful Dani Hernández. At the end of Act I, Hernández lifted Valdés by the ankle and seamlessly carried her aloft. Kitri’s father, Lorenzo (Félix Rodríguez), humorously stooped as he hobbled along. Act I was stolen, though, by Ariel Martínez, as Espada, and his fellow bullfighters. They soared into the air and fiercely whipped around their red capes. Martínez, a whirlwind, really stirred up the crowd with his sizzling swagger and marvelously pliable back. He landed on his knees and triumphantly arched his back so that his arms, extended over his head, nearly swept the floor.

I had high expectations, and I was feeling upbeat after Act I. The audience was positively buzzing, and it promised to be a night of great dancing. (The only thing that put a frown on my face was the barefoot woman who stuck her feet out in an aisle during the intermission as a man sat in front of her and rubbed them, in full public view. I’d rather not see that in the theater!) 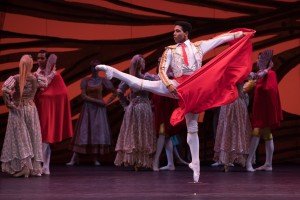 To my disappointment, though, Acts II and III didn’t offer the same level of dynamism. In Act II, Scene One, the costumes began to bother to me. The company’s costumes are dated, and the rainbow hues worn by the gypsy women made my eyes cross. It was sometimes hard to differentiate between bodies with all the swirling colors. The men in the corps continued to display dramatic jumps, tossing perfect scissor kicks that sliced through the air. In contrast, Act II, Scene Two’s dryads, in turquoise shades, just didn’t deliver thrills.

Act III of Don Quixote looked less uniform and crisp than the dancing that started off the night. And the costumes became downright irritating to me. On the “girls,” a proliferation of generously-sized pink floppy bows (on the chest, the rear, and top of the head), plus ruffles and curly wigs, served as a distraction. Valdés demonstrated extraordinary feats of balance as she rested on a single leg, en pointe, for what seemed like minutes, and the crowd roared appreciatively, but she looked sharper, in my view, when the evening began. 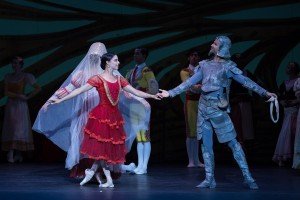 For Giselle, which followed a two-night run of Don Quixote, I tempered my expectations, yet I nonetheless felt a little let down. The opening film, waves by Alonso from the box, and her curtsies on stage with her dancers repeated. The costumes and set still looked outdated, which is an odd thing to say, maybe, for such an old ballet. It may also seem odd to say that, like the costumes, the telling of Giselle was old-fashioned, but it was, and to some extent it worked. I especially liked the clear gestures and acting, which made the story more fun than usual to follow. Finally, Sadaise Arencibia as Giselle seemed, well, old. She’s an experienced dancer, and she wasn’t at all convincing in Act I as the young love-struck heroine. She was too cool, too poised.

As with Don Quixote, the dancing in Giselle, overall, while pleasant, rarely wowed me. Again, it was the young males who generated the most sparks. Raúl Abreu, as Albrecht, and Ernesto Diaz, as Hilarion, were each quite good, as were the four male friends — Yankiel Vásquez, Daniel Rittoles, Luis Fernandez, and Martinez (who kept sizzling despite no longer wielding a bullfighting cape). Their legs flew up to their chins and flew high behind them. 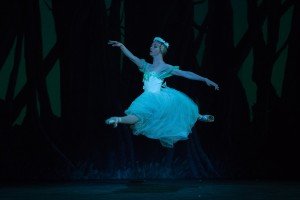 Arencibia did a better job as Giselle in Act II, where her cool, steely composure makes sense in the realm of the afterlife, although her pleading on behalf of her prince was too mild. Ginett Moncho, who underwhelmed me as Mercedes in Don Quixote, excelled as Myrtha, Queen of the Wilis, for similar reasons. Moncho is elegant and measured, but authoritative, and has a bit of an icy demeanor, which suits Myrtha perfectly. The dancers were able to conjure the artistry and magic critical to making Act II a success, but the lighting was very dark and very green, which spoiled the effect of seeing multiple rows of ballerinas in dazzling white tulle. Instead, I saw dancers clustered, indistinctly at times, in a dense green fog, as if I was gazing through a green glass bottle. Their dresses looked emerald, and at least one local critic opined that their dresses were actually green. 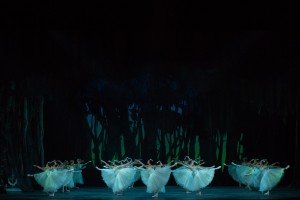 Ballet Nacional de Cuba’s visit to the Kennedy Center, along with Alonso, was something I’m thankful to have witnessed. In many ways, it was like opening a time capsule and peering inside. The young male dancers, in particular, were strong. I hope the company returns to the Kennedy Center soon, perhaps next time bringing with them a more contemporary work.