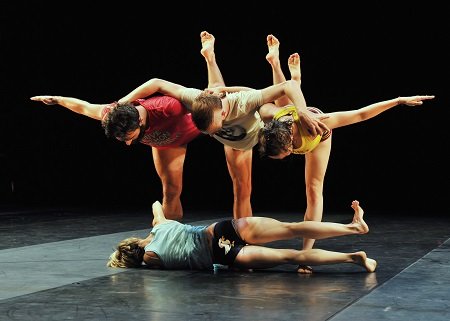 Ballet Preljocaj touched down at the Joyce Theater last night, and brought with it a creation from another planet: Empty moves (Parts I, II and III). As strange-looking as it is, and as difficult to sit through as it is, it is an extraordinary dance event, and the four members of the company who constitute the piece’s entire cast deserve recognition, and perhaps a raise. Definitely a raise.

Angelin Preljocaj, the company’s founder and Artistic Director, takes his inspiration from a 1977 concert in Milan during which John Cage entertained the audience with what appeared to be random words (or parts of them) and sounds (including phenomes), with extensive soundless gaps in between, all delivered monotonically but with occasional and quickly squelched bursts of guttural emphasis. I’ll leave a discussion of its significance to experts in the field, but Cage’s Milanese audience apparently didn’t know what was coming. After sitting quietly for ten or so minutes waiting for something comprehensible to happen, they erupted – first with one or two audience members audibly sneering, then with seemingly the entire audience taking turns shouting, taking over a microphone to hurl insults (or maybe to demand their money back), and sarcastically applauding when the monotone was interrupted by some more emphatic sounds. Through it all, Cage continued.

And through it all, a recording was made, which included both Cage’s sounds and the audience reaction. This reaction effectively added another level of sound, a raucous one, to the concert.  Empty moves is choreographed to that recording.

Preljocaj states in extensive (and welcome) program notes that Empty moves feeds on actions and movements inspired by Cage’s words and phenomes, but also “attempts to make contact with the imperturbable belligerence of the instigator of that evening in Milan.” With all due respect, Preljocaj is being somewhat disingenuous. I get that he is constructing and deconstructing movement, and that there’s no meaning behind any of it. That’s neither good nor bad. But what makes this piece so fascinating is that it is so antithetical to what Cage was doing.

Empty words may have been inspired by the 1977 concert taping, but it’s considerably different from Cage’s work (as composer or agent provocateur or both). Indeed, except for being thoroughly abstract (and I’m not sure I’d categorize what Cage did as ‘abstract’), it’s not designed to have an audience throw insults, brickbats, or tomatoes at it.  Rather, it’s an extraordinary set of movements that never stop, and that never give its dancers or its audience breathing space. It may invite some audience members to leave out of misplaced ennui (quite a few did), but it also invites the audience to watch what happens next with anticipation, to marvel at the somewhat bizarre but not at all unpleasant or strained choreography, and to disbelieve that the four Ballet Preljocaj dancers – Nuriya Nagimova, Yurie Tsugawa, Fabrizio Clement, and Baptiste Coissieu – could stay in sync with each other, not miss a step, and look happy doing it, as they did for every second of the dance. Most of audience members stayed, and many gave the cast and choreographer a standing ovation when the piece concluded.  I was one of them.  Empty moves isn’t particularly enjoyable, but it, and particularly its dancers, are magnificent. 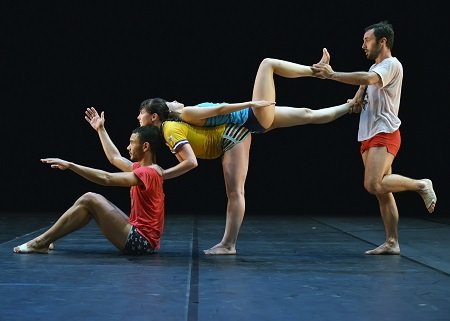 There is no point in providing a blow by blow description of what happened on stage. That would take a book. And forget what you might know about Preljocaj’s choreography. It’s here, but you might not recognize it.  Suffice it to say that the four dancers at various times dance recognizable movements (steps and combinations) in pairs (opposite or same sex), individually, and as a group, either with identical movement or slight variations from one pair to another, or in sequence from one pair to another, or from one individual to another, lift each other up, push each other down, jump, roll, play with each other, and in the process use each other’s limbs as pedestals, levers, chin rests, foot rests, head rests, or assume sculptural positions that resemble Pilobolus weight-shifting, but that don’t correspond to any recognizable shape in the physical universe. As all this and more happens, movements change from one moment to another, with occasional pauses to pose for a few seconds then move on.

And that doesn’t tell the half of it.

The background sounds play a part, but it’s not clear how much of a part. Every once in a while a movement seems timed to a sound on the tape, but that’s not always the case, and because there is so much ‘empty air’ between the ‘empty words’, the moves, which are empty only in the sense that they have no meaning, are choreographed (and executed) in silence. I found the taped sounds (except for the aggravated audience expressions) annoying, but the movement exhilarating to watch. Jerome Robbins’s Moves, without the restraint imposed by an intent to do anything more than examine bodies moving in space.

The dance has three parts (my understanding is that they were choreographed sequentially over time) but they apparently correspond more to the stages of Preljocaj’s ability to create rather than any recognizable action on the tape – although I did notice that in what I believe was Part III, the synchronization between the movement and the audience’s relatively constant, increasingly vocal and aggressive response was often clearly apparent. And there’s no separation between the Parts on stage. The dancers twice break to drink water from a bottle, which I suspect marks the demarcation between the Parts, but the water break is integrated into the movement, and the entire one and a half hours appears, miraculously, seamless.

And when the four dancers exited the bare stage and the plain stage lighting dimmed to black, the recorded Cage/Audience concert continued. Perhaps that signals that Preljocaj will eventually add a Part IV.  The mind boggles at the thought.

Parsons Dance at the Joyce

Hong Kong Ballet at The Joyce