Giselle is a favorite of mine from back when I had a children’s coloring book that featured pictures and brief summaries of the great traditional story ballets. Something about the Wilis captivated me then and still does. I love their dark mystery, their ethereal white long tulle skirts, their cold stares. For me, and most Giselle fans, it’s all about Act II. As with Swan Lake, I enjoy determining which performance I prefer — instead of Odette and Odile, I consider Act I’s living Giselle or Act II’s ghost. I’m often split between favoring Odette or Odile, but I’m rarely torn about which Giselle I like better. Act II’s Giselle wins nearly every time. 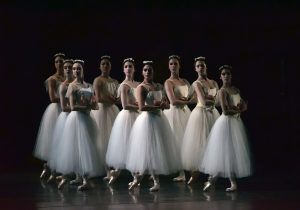 ABT in Act II of Giselle, photo by Gene Schiavone

In American Ballet Theatre’s Giselle, staged by Kevin McKenzie, Hee Seo in the title role didn’t break the pattern. In Act II, ironically, she came alive! Here, she gained power and emotion, and her dancing elevated from adeptly completing steps to sailing through them. Seo was the epitome of grace and elegance. She tenderly and beautifully forgave Count Albrecht (Cory Stearns), just as one would expect from a terrific Act II Giselle. Together the pair melded and melted and delivered a perfect tragic parting. In one memorable moment, Seo leaned back against Stearns’s arm, resting her head against it as he gently rocked her, and then suddenly she left him all alone.

The lighting in Act II, by one of dance’s most talented lighting designers, Jennifer Tipton, made the white of the Wilis glow with hints of pink and blue, but the stage was otherwise fairly dark. Thus, sometimes the dancers’ expressions were difficult to discern. The somewhat obscured faces, however, added to the uniform look of the gorgeous vengeful spirits. The flashes of lightning announcing the entry of the Wilis contributed to the eerie atmosphere. 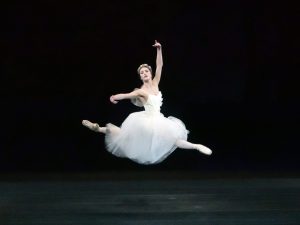 Devon Teuscher’s Myrta was noteworthy. She ruled over the Wilis with a firm hand, but she showed some amount of softness, too. I think Teuscher will continue to grow in the role. I look forward to seeing a bit more edginess from her. I like Myrtas who are frightfully intimidating, and Teuscher isn’t quite there yet, but she’s well on her way. The corps danced gloriously, as well, with their arms wispy above their heads or reaching out in front of them, their legs stretching infinitely behind them or oscillating directly beneath them in lovely bourrées.

A classical ballet performed by one of America’s strongest ballet companies should make one swoon, and ABT’s Giselle did, but only in Act II. Act I plodded along, and the gestures became very repetitive. I cringed at all the kisses that were blown back and forth between Seo and Count Albrecht (Stearns). If they’re deeply in love, it should be apparent in their dancing, and those excessive puckers aren’t needed. Lacking in gestures or excess of any kind were the villagers as they sat and stiffly watched the dancing in front of them. More lifelike movement should have been present — more head nods, exchanged glances, and conversational body language. The sleek hunting dogs trotted with more liveliness! 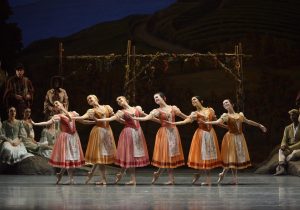 ABT in Act I of Giselle, photo by Gene Schiavone

The costumes by Anna Anni could use some updating. The colors in Act I aren’t especially flattering — a lot of pinks and peaches and browns, and the pleated bubble shorts for the men ought to be replaced. I also missed the wings on the backs of the Wilis. Instead of actual tiny wings, they have barely visible flaps of gauzy fabric hanging from their shoulders. The effect is pretty, but it’s not enough like wings for my taste.

Seo’s final moments of heartbreak and madness in Act I disappointed me. She was surprisingly quiet and rather subdued. She definitely looked stricken, but I’m partial to a crazier breakdown than Seo offered. Despite the slowness of Act I, Giselle’s death came too quickly. Seo’s final collapse came rather abruptly, although Seo did provide a dramatic preview of her demise in which she swayed, sat down on a bench, and wiped her brow before rising and dancing as cheerfully as before. 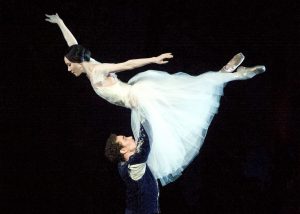 Stearns remained solid and consistent throughout, and he kept my attention. More than the rest of the cast, he naturally and comfortably inhabited his role. Stearns exuded genuine grief as the curtain closed. If only everyone who broke promises and shattered trust could be so contrite!