I can’t complain about the repertory program that Ballet Vlaanderen (Ballet of Flanders) presented during its recent week-long engagement at the Joyce Theater, its first appearance there, to celebrate its 50th Anniversary. Each piece was created by a recognized and celebrated choreographer (Akram Kahn, Artistic Director Sidi Larbi Cherkaoui, and Crystal Pite); each was given superlative performances; and each at least claimed to have something to say – even though I couldn’t always figure out what that was. Nevertheless, the program left me unimpressed. 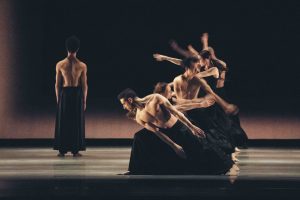 Khan’s Kaash may have suffered from being a reduction of, or an excerpt from, the original dance, which I understand was an evening-length (roughly an hour) dance first choreographed in 2002 for Khan’s own company. What was presented seemed somewhat shorter. Reduction / excerpt or not, its cast size was expanded. According to the company’s website the original cast had six dancers (with Khan); a 2014 revival had five (without Khan). This performance had a listed cast of fourteen.

Part of the difficulty I had with Kaash arose from the program notes, which appeared to limit Kaash’s “meaning” to Khan’s “vision of Shiva, the god of both destruction and creation.” If it had been presented the other way around, say, “as Khan’s vision of destruction and creation as controlled by the Hindu god Shiva” for instance, I might have seen it through a different filter. I kept looking for images of Shiva, rather than abstract images of creation and destruction without Shiva’s physical presence. It makes a difference: there is a corporeal form to Shiva (although that form can vary) that makes sense to look for, as opposed to a nebulous “force.” The notes also define “Kaath” as the Hindi word for “if,” which brings to mind some sort of alternative to what happened, or what might happen in the future. I found later that Kaath means “if only,” or “wish”: essentially, a dream of something imagined. The difference is not insignificant. Seen as some imaginary creation of what Shiva may have done with respect to the cycle of creation and destruction explains a lot about what Khan was doing here. 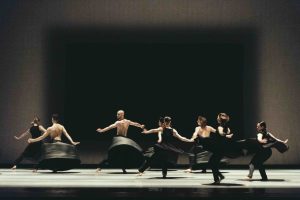 But even had I known in advance what Khan’s real intent was aside from representing Indian-derived mythology, dance derivations (from the Indian dance-form Kathak), and Indian-derived music (the original score was by English-Indian composer Nitin Sawhney), all of which were sufficiently clear, I’m not sure I would have “gotten” what Khan was doing here beyond creating a passionate and powerful dance where the purpose for the passion and power isn’t sufficiently clear. I didn’t see (until toward the end) destruction or creation: what I saw was relatively purposeless sound and fury, Indian style. But I concede that in this respect the problem was probably more my own than any defect in choreography (and certainly not in execution): following a contemplative beginning (before the audience was seated and continuing beyond the piece’s commencement) in which one dancer, standing and facing upstage, appears to embody some sort of forceful but emotionless power of reflection combined with a sense of burden, the heavy percussion at the dance’s outset should have been a dead giveaway: Big Bang and all that. [That sole standing man could alternatively have been a representation of humans before Shiva provided direction.]

But there’s a fundamental problem visualizing a cycle of destruction and creation. In order to avoid repetition, the cycles must be shown as different from each other. That Khan here attempts to do: there are significant visual distinctions between apparent cycles. But they’re distinctions without differences; the cyclical cataclysms simply take insignificantly different forms. Kaash is a striking-looking, relentlessly powerful dance (abetted by the Kathak style’s relentless attack) even during periods of silence, filled to overflowing with thrusts and swirls and undulating arms. This is both a strength and a limitation. Kaath was beautifully choreographed (in terms of its display of power), and equally brilliantly executed. But although there is significant movement variety and a plethora of stark but apocalyptic imagery (the sets were designed by Anish Kapoor), the power can become numbing. Kaath will keep one awake to be sure, but in a way that at times is more akin to a migraine. 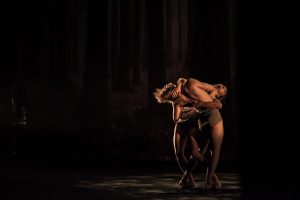 Both the Debussy composition and the Nijinsky dance were inspired by the poem L’Après-midi d’un faune by Stéphane Mallarmé, which tells of a faun’s encounter, perhaps real perhaps an intoxicated imagining, with nubile young nymphs, and has (or imagines) a sexual encounter with one of them. In Cherkaoui’s revisionist hands (accompanied by an Indian-influenced score that’s a “contemporary take” by Sawhney on the Debussy original) there is no group of nymphs, nor is there any of the stylized Nijinsky movement. There are two fauns, one male and one female (she’s described in the program note as the faun’s “female counterpart.” So here they’re equals: in species and, more significantly, in animal attraction and lust. The faun (Philipe Lens) is seen first, in a somewhat nondescript ennui. But then, instead of being approached by nymphs, instead he retreats offstage (at least, that’s as it appeared from my vantage-point) and is replaced by the female faun (Nicola Wills), who appears considerably more agitated than he did: a female faun in heat. Indeed, it’s she who awakens him. They proceed to have a choreographed sensual encounter, increasing to a discretely simulated sexual event (or several as the dance progresses), with each being encouraging and willing participants. There’s nothing here about being self-absorbed and self-restrained (as in Robbins’s Afternoon of a Faun, which also features one female and one male faun, albeit surrogates). 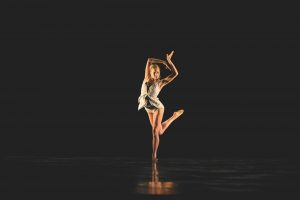 While I appreciated Cherkaoui’s complex but seamless physical connections, and certainly the commitment of the dancers, to me this appeared more like a programmed sexual encounter rather than spontaneous eroticism, with the audience as voyeurs rather than being vicariously transported to a sexually charged and somewhat primitive environment. But as with Khan’s Kaash, maybe other members of the audience responded differently. Regardless, there’s no doubt that Lens and Wills danced to the point of exhaustion – but as much if not more from their execution of Cherkaoui’s choreographic intricacy than his choreographed passion. They deserved the appreciative and enthusiastic applause they received. 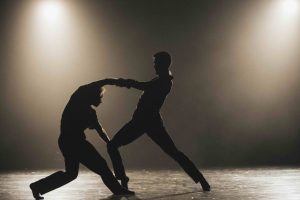 The most problematic of the three pieces was Pite’s Ten Duets on a Theme of Rescue. More often than not I’ve been impressed by Pite’s work, as has most of the rest of the dance world, but this one, choreographed to music from the soundtrack for the film “Solaris,” composed by Cliff Martinez, was far less focused. The program indicates that the dance offered a “highly personal and moving take on the themes of rescue and desperation,” and that “through ten intimate duets, Pite reveals interpersonal interactions between two dancers…”. Well, either there’s physical contact and/or implicit communication between two dancers in a duet or there isn’t, and I’ll grant that the duets in Ten Duets, unlike, say, much of Cunningham that I’ve seen, does have that. But so do all duets which contain even a semblance of emotional gloss. On that level, there’s nothing new here beyond having same sex duets, which isn’t really new anymore. Pite puts it together in an interesting way (for example, the ten duets are not presented as discrete “duets,” some involve physical contact and some don’t, and some seem to appear and disappear in a flash), but it’s difficult to see how interesting it might look because the illumination makes everything appear dark or in shadow or not visible at all because of the blinding light.

As for themes of rescue and desperation, one can read that into most duets that aren’t solely relating how happy the couple is together. The better duets show some sort of journey connected with it. There certainly were duets with indications of rescue and desperation (though I couldn’t find ten duets to which that description fit), but nothing out of the ordinary. And all that was shown was just that: the audience doesn’t know what led up to these duets, or what followed. 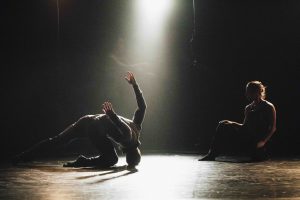 There’s no question that the choreography is on a high plane; I’d expect nothing less. But in terms of having any significance beyond being a display of good choreography not necessarily signifying anything unusual or presenting it in a novel way, aside from constructing multiple duets with different partners out of a total of five dancers, there wasn’t any.

That is not to say that the dancers were in any way deficient. On the contrary, there clearly was an attempt here to milk as much emotion out of the choreography as the choreography allowed. The five were Matt Foley, Lara Fransen, Teun Van Roosmalen, Lens and Wills.

Each of the three dances differed significantly in style, and in that sense the Ballet Vlaanderen programming here was commendable. Beyond that, the presentation of lesser efforts by respected choreographers does not necessarily make for a memorable evening. Next time the company returns, which I trust will be sooner rather than later, I hope they’ll bring with them the best of their repertory.

Akram Khan Company: Until the Lions