It’s been over two years since Ballet West last appeared at the Joyce, its debut full New York season, and its return to the Joyce last week was most welcome – particularly as it provided the opportunity to see its fine roster of dancers, but also, in this program, to get a peek at an impressive piece of choreography by an “emerging” choreographer.

I must note at the outset that these Ballet West dancers, assembled under the leadership of Artistic Director Adam Sklute, help prove a point I made several years ago. While one or two (or three or four, depending on whether your New York point of view extends beyond the Hudson) ballet companies may arguably present the “best” dancers, whatever that might mean, there is no question that dancers now performing in ballet companies in most every nook and cranny of this country can be both technically brilliant and thrilling to watch. Whether this decentralization of talent is a product of choice (dancers preferring to work in a less intense venue or closer to home), or the fact that talented dancers must find a home somewhere, the result is a boon for the dancegoing public, and reflects the ever-increasing numbers of highly capable dancers graduating from ballet schools that are staffed by ever-increasing numbers of former professional ballet dancers who, also whether by choice or because they too have to go somewhere, impart their expertise to their students wherever these students may be. 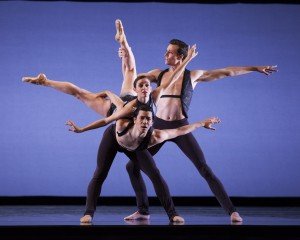 I’ve mentioned previously that the 1970s and 80s were a “Golden Age” of ballet; we are in the midst of another now, this time fueled by this expanding pool of highly capable dancers rather than by international stars. In sum, a balletomane can go virtually anywhere a professional company is performing to see, depending on the choreography, a rewarding and memorable evening of dance.

To me the most noteworthy of the pieces on this program was one that, officially, wasn’t there. Africa Guzman has had a lengthy and admirable career as a dancer, performing leading roles in classical ballets since she was a teenager after joining the Compania Nacional de Danza, then under the direction of Maya Plisetskaya, in 1988. She became a principal dancer with CND in 1990, after Nacho Duato became CND’s Artistic Director, and (briefly interrupted by a stint with Nederlands Dans Theater from 2003-2005), remained with CND until 2010. Since then, she established her own ballet school in Madrid (Escuela de Ballet Africa Guzman), and has also taught at various locations worldwide. I don’t know exactly when she began choreographing, but I’ve found few references to her work outside of an academic context. So although she’s been around awhile, she’s still a relatively novice, emerging choreographer. That status may soon end.

Not surprisingly, Guzman’s style seems derived to a large extent from Duato and from her (and his) association with NDC. But it has its own flavor, at least based on Sweet and Bitter, which was given a special “preview” performance during this Joyce run (it’s scheduled to officially premiere in Salt Lake City next May, during Ballet West’s second annual National Choreographic Festival).

Since there’s some indication that what was presented at the Joyce were excerpts from the full dance (although that would be disappointing, since it appears complete to me), and since at least technically revisions may still be made before its formal premiere, I won’t describe Sweet and Bitter in detail. Suffice it to say that the eight dancer contemporary ballet, to music by Italian composer Ezio Bosso, is entertaining from beginning to end (anchored by an impressively crafted pas de deux, impressively executed by Allison DeBona and Chase O’Connell), and reflects a level of choreographic accomplishment that is already mature. It also displays that rare quality of knowing when enough is enough.

The evening opened with Val Caniparoli’s Dances for Lou, a celebration of the 100th Anniversary of composer Lou Harrison. Harrison is an under-appreciated American composer, who, among other things, was inspired by and embraced Asian musical styles. His Concerto for Pipa with String Orchestra, created in 1997, 6 years before his death, is an enlightening, and thrilling, piece of music to hear. I don’t claim to be particularly knowledgeable about Harrison’s career, but toward the end of his life, his compositions reportedly became more lush-sounding, but no less Asian-influenced. This composition reflects that. 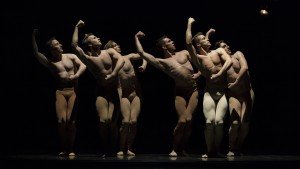 The pipa (sometimes spelled p’i-p’a), which is related to the lute, is one of the oldest musical instruments, dating back at least to the 1st Century A.D, when it was culturally exported from India/Asia to China. The name pipa is derived from the outward (pi) and inward (pa) motion of the hands/fingers as the instrument is played. It’s relatively large-looking (from paintings), was initially played horizontally, and its rich sound (actually it’s capable of many sounds) is almost otherworldly. As I listened to the composition, I heard – aside from the plucking of the strings – a sound panoply that brought to mind an Asian form of Bernstein or Copland.

As you might tell from that somewhat rapturous description, the music was more enthralling than the dance, but the dance has moments of brilliance.

Corresponding to the Concerto, the dance is divided into eight sections, beginning and concluding with ensemble work, and stocked with distinctive pair, trio, or group dances in between. The piece has strong sense of balance, slightly off-kilter as it may be. For instance, the initial segment, the first movement of Harrison’s composition, includes brief but distinctive duets by dancers other than the leads that are repeated, in different form, in the final ensemble segment. In between are the featured dances, beginning with a duet danced by DeBona and Adrian Fry (“Troika”), an emotionless but well-executed male/male duet performed by Lucas Horns and Jordan Veit (“Wind and Plum”), a solo for Jenna Rae Herrera, joined in part by Oliver Oguma (“Neopolitan”), which is reprised and expanded later, a dance for six bare-chested men wearing pinkish (nude-colored) tights that’s not quite as funny-looking as it sounds (“Three Sharing”), and the dance’s centerpiece, a gorgeous pas de deux danced by Beckanne Sisk and Christopher Ruud (“Threnody for Richard Locke”). I highlighted Sisk in a review following Ballet West’s previous Joyce appearance, and she remains as compellingly magnetic now as she was then.

The evening concluded with another contemporary ballet, Fox on the Doorstep, choreographed by the company’s Resident Choreographer Nicolo Fonte to a musical montage of excerpts by Olafur Arnalds, Harry Escott, and Johan Johansson. Dedicated to the choreographer’s father, Fox on the Doorstep is an enigmatic piece, but it’s not without merit. Translated, that means I have no clue what, if anything, Fonte is trying to say, other than a generalized sense of love (primarily familial) and loss, but the presentation is interesting. 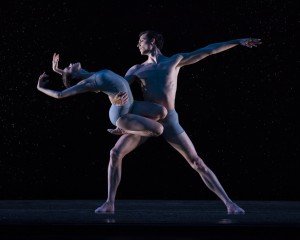 Beginning with “slow motion” movement by one couple as others seem frozen in place, to a musical background that sounds metronomic, the dance evolves into a series of dances in which, most often, one featured dancer is watched (or witnessed) by others. It would have been helpful to know who or what these characters are supposed to represent beyond being generalized images of demonstrating ability – perhaps to impress the others. Emily Adams, whose character is dominant in the piece, seems the somewhat lost child/adult looking for … something (perhaps direction) or someone (perhaps to provide direction). Eventually the curated score picks up steam, as does the pace of the choreography, and it ends with another individual (Oguma), who enters the stage from the wings as the others watch and as “snow” falls, a sure sign of some ending – of a life; of a familial relationship? And in the end this lone man simply looks up at … something, or some memory. Well, I said it was enigmatic.

Sandwiched in between these two dances were a trio of shorter pieces that are perhaps more representative of the company’s breadth. In addition to the preview of Sweet and Bitter, they included a pas de deux from George Balanchine’s Chaconne and Gerald Arpino’s Ruth: Ricordi Per Due.

It takes a measure of courage to present a Balanchine dance in New York, the home of Balanchine dance. But this excerpt from Chaconne is a painless way to do it. The pas de deux can stand on its own, and does not necessarily invite comparisons. Unfortunately, although it was executed well overall by the pair I saw, Katherine Lawrence and Rex Tilton, Lawrence’s pasted-on nervous smile diminished its impact. But this was Lawrence’s sole performance of this pas de deux during this week’s run, so nerves and some measure of stiffness are understandable. She did a much better, and more relaxed, job in Fonte’s piece.

Ruth: Ricordi Per Due, which premiered with the Joffrey Ballet (Chicago) in 2004, is Arpino’s last ballet. It’s not a particularly complex piece, but complexity isn’t what this dance is about. Loosely translated from the Italian as “remembrance” (a “record”), the dance was commissioned to honor the patron’s mother, Ruth. That it does: but Arpino presents it as a remembrance for two, only one of whom is still living.

To familiar music by Tomasso Albinnoni, the dance is an ardent tribute to that woman’s memory, seen in terms of a “lost love” duet in which the man visualizes, remembers, and comes to terms with having lost his companion. It’s romantic and sappy, but it’s supposed to be, and in its own way it’s Arpino’s farewell, and a tribute to him as well. The grieving/celebratory lovers were given luminous, passionate, and majestic portrayals by Ruud and Aolyn Williams.

Founded by William Christensen in 1963, Ballet West has a long and distinguished history of intelligent, inventive, forward-looking programming. It’d be nice not to have to wait another two years to see them again in New York.