Filmed at The Curve, Leicester

BalletBoyz Deluxe is available to watch on www.facebook.com/SadlersWells/  until 3rd April 2020


Deluxe is a programme of all-female writing for all-male performers, a turnaround of traditional values, and a successful outcome. It also marks an innovative move to keep dance visible during the Covid–19 lock down by distributing a film of an earlier performance to replace the cancelled tour .

The two main works are prefaced by a short video opener, Sarah Golding’s The Intro. SEED Ensemble provides the powerful backing boosted by moody brass as the six men in work-a-day white overalls eye each other up in a stylish postmodern version of the old fashioned nudge and a wink. The choreography, a little bland in the opening, steps up a notch as individuals make their mark and the posturing finds focus on the camera lens. Golding proves to be an interesting and distinctive new voice. 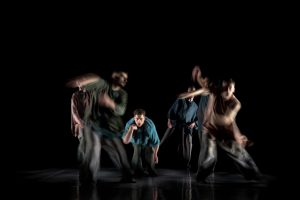 Ripple, choreographed by Xie Xin found contrast with an enigmatic visualisation of water, set to an electronic score, by Jiang Shaofeng. The score brings sounds of waves lapping and a delicate musical line while Xie’s choreography is inspired by water in its many manifestations where so often the surface stillness disguises the relentless power below. 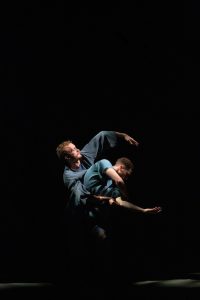 The dancers are dressed in Eastern style loose trousers and tops and the mood is meditative. There is a suggestion of mentor and pupil as Harry Price guides Will Thompson through a series of gestures and movements. It’s a gentle start, slowly building as the other dancers join in. The movement is generous bringing the whole body into play, evoking the rhythm of waves in arms and bodies. For the men, it’s a chance to show a style more lyrical and fluid and possibly more out of their comfort zone but they rise to the challenge.

Xie structures the energy with skill as the current flows from one man to another and dynamic shifts are boosted by the occasional power surge. The piece is non narrative, underling the force of nature and Thompson is singled out showing superb control and a lithe, fluid body. The cycle finally comes to rest, returning to the opening image of the two men.

Bradley: 4:18 is about a young man, financially secure, but searching for a good reason to exist. We meet him on the streets at 4.18am, in a dishevelled black suit with a face that’s seen a rough night.  It’s a fertile starting point for choreographer Maxine Doyle to reimagine as a composite of six dancers. It offers broad scope for personal introspection as each dancer searches through a maelstrom of human emotions to create his inner Bradley. 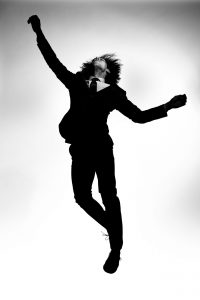 Cassie Kinoshi’s jazz score perfectly captures the moment. Full of individual life and colour, sometimes taking the lead, sometimes letting dance find the way but always the right partner. Snatches of text, some mundane, some of more depth illuminate and single out what is unique in each man. Many were struggling with inner demons, some are more at ease moving with confidence and a touch of bravura, though mostly its edgy and tense with bursts of nervous energy. With the first duet by Matthew Sandiford and Will Thompson, the dynamics shift, the relationship is combative unleashing innovative moves. The conflict spreads and Doyle, working with fight director, Kate Waters, builds a fight scene that is nasty, real and brilliantly choreographed to maximum effect. 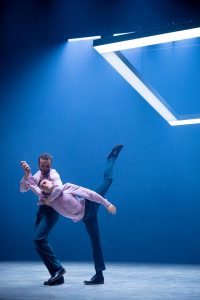 Coming out the other side the dancers strip off their jackets and in more casual shirts they come together bonding in one multi-personality body of many parts. The final section reaches a heightened emotional level, as a superb solo for Benjamin Knapper, leads into a soul searching duet with Price. It’s incredibly close and as intimate as finding another aspect of yourself that you’ll need to live with. It’s a beautiful moment.

Finally dance and music join forces in a pulsing rhythmic ensemble building to a climax, before a sudden black out. It’s dance for our time, autobiographical and self-interested, open to difference while feeling the tug of togetherness and the young men do it proud.

BalletBoyz at the Joyce: Men of War