There are good things to say about Tuesday night’s opening performance of BalletNext, the company co-founded in 2011 by Michele Wiles, former principal dancer with American Ballet Theatre. This group of seven women (including Wiles and one guest artist) features several sparkling dancers bursting with dynamism. And the final two pieces on the brief program, which will continue through Saturday at New York Live Arts, show both admirable, albeit limited, risk-taking and the promise of more substantial pieces to come.

That being said, and keeping in mind that in the overall scheme of things six-plus years is not a long period of time within which to forge an identity, there’s a sameness to the presentation, and a dearth of novelty notwithstanding the novelty of sorts reflected in the final two pieces: the world premieres of Follin, choreographed by Wiles and guest dancer Bailey Anne Vincent, who has substantial hearing loss as a result of a medical condition that began to manifest in her teens, and Vibrer, a ballet that Wiles choreographed to music by jazz trumpeter Tom Harrell. 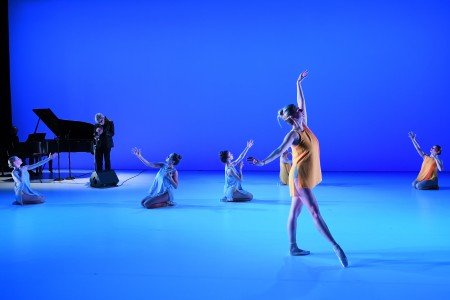 Named in honor of Vincent’s daughter, who was born partially deaf (the word “follin” itself has no meaning pertinent to the dance), Follin bears some similarity to other pieces choreographed to music by Philip Glass, particularly by Twyla Tharp, but that’s superficial, and a consequence of the distinctiveness of the music itself (here Floe, Dance VIII, from Glassworks).

The choreography for Follin is varied, with group movement by all six dancers (Egle Andreikaite, Violetta Komyshan, Alice Regnouf, Emmie Strickland, Vincent, and Wiles) highlighting the music’s fluidity and complexity, interspersed with brief solos. I particularly enjoyed the way Wiles and Vincent choreographically manifest the intricacies and melodic breaks in the score, with at least one dancer (not Vincent) frequently moving ever so slightly differently, and to a slightly different beat, from the others – as if to emphasize that being different can enhance rather than diminish the quality of the dance. Especially impressive were the speed and crispness of Regnouf, a diminutive powerhouse, Strickland’s combination of crystalline finesse and elegant attack, and Vincent’s gutsy lyricism – she showed little if any adverse impact from her severe hearing deficiency. 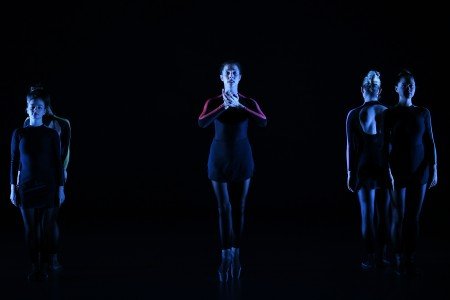 But the quality of the dance, and of Vincent’s performing contribution to it, seemed intended to take a back seat to the more strident message the choreographers were attempting to communicate: that deafness is a disability, but one that ballet should accommodate.

Reportedly, the dance merges sign language into the choreography. I didn’t see evidence of that – although it’s certainly possible that the dancers’ arm and hand movements, which at times did appear to be distinctive (but not inconsistent with the holistic movement quality), might have incorporated deaf sign language. But without an indication of when that integration occurred (and with no “simultaneous translation” provided – at least none I could see, and if there was someone on stage translating the sign language, I think I would have noticed), the sign language was absorbed into the movement imperceptivity. And if that was the case, then why do it?

However, perhaps to emphasize the piece’s integration of sign language and the point that deafness, like other differences and possible disabilities, should be accepted within ballet’s ambit, the dance is interrupted toward its end by a recorded reading of Robert Frost’s poem Acceptance, which is accompanied by an onstage sign language translation. That was a nice touch, but including it (unless the sign language transmission of the poem was incorporated into the choreography in a way that I was unable to discern) broke the flow of the dance, and served only to emphasize the disability of deafness rather than Vincent’s demonstration that deafness need not be a disabling disability at all. 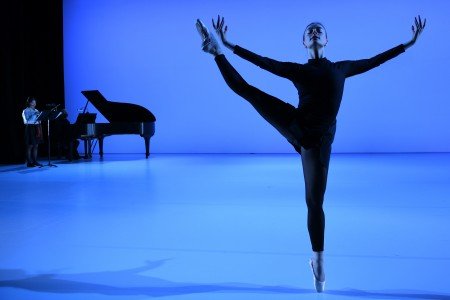 Similarly, I heard on one or two occasions hard pounding of feet hitting the stage where one might have expected virtual silence. If this was done to enable Vincent to sense and adapt to changes in the music’s tempo, fine. But I suspect, since it was not consistent throughout the piece, that it was done to make some point about the artistic validity of creating sound by the pounding of feet (regardless of whether such thumping is necessary to enable deaf dancers to dance ballet), as opposed to the usual efforts made in ballet to avoid adding the sound of pounding feet to the aural experience of the dance. That may be a fair argument, but as used here – again, unless in some way to aid Vincent’s execution – it only served to unnecessarily accentuate the disability.

But these are relatively minor quibbles. The ballet itself – the choreographed parts of it – was the evening’s finest accomplishment. And the dance’s final image of Wiles and Vincent reaching out and gently making contact/connection with each other at the fingertips is a concise visual synthesis of the piece’s intent and significance and a more meaningful (as well as literal) “nice touch” that makes the point without hammering it. 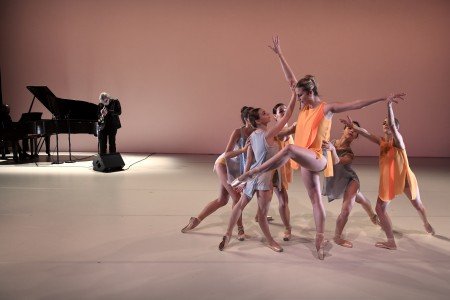 Vibrer is a French verb that means “to vibrate,” with collateral meanings “to be stirred” or “to be moved.” All these definitions apply to Wiles’s second choreographic/performance collaboration with Tom Harrell, but not in a way that defines the dance.

Vibrer is billed as a fusion of classical ballet with jazz genres, and it is, but it’s also a neatly crafted dance in which ballet steps morph into “slinky” movement and counterpoint reflecting the character of Harrell’s trumpeting and the accompanying jazz piano, played by Danny Grissett. What gives the dance added visual zest are the costumes, designed by Wiles (who designed all the dances’ costumes) and executed by “costume coordinator” Victoria Bek, which divide the dancers into two groups – three wearing pale orange “tunics” over a light blue leotard; the other three in which the color combination is reversed. The dance mixes and matches these color groups for no appreciable reason that I could discern in one view, but the result is as much an interplay of colors and forms as the choreography is an interplay of jazz and ballet: one reflects and amplifies the other. 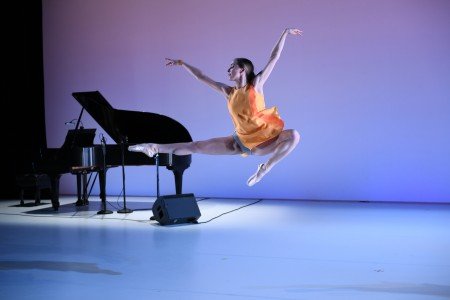 However, although live music usually enhances a dance performance, I found Harrell’s appearance to be unsettling. Harrell has had a distinguished career as a jazz trumpeter, flugelhornist, composer, arranger, and performer. I had not previously seen him live, and his stage presence may have been perfectly normal for him. And, normally, I wouldn’t comment in a review on anyone’s particular appearance, especially a musician’s. But I found Harrell’s appearance (looking like the offspring of an Old English Sheepdog and a vulture) and distant, trance-like demeanor, to be distracting and a little scary: I wasn’t too sure he’d make it beyond the wings. 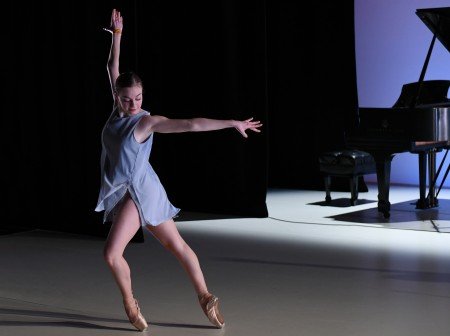 But perhaps that’s part of Harrell’s gestalt: out of this apparent visual disability emerges sound that’s lively and intelligently conceived but also surprisingly (to me) muted, gently melodic, understated, and controlled, and that was seamlessly integrated with Grissett’s piano – and which Wiles seamlessly integrated into her choreography.

The evening’s opening two pieces, both also world premieres, were less noteworthy. The Pianist, to J.S. Bach’s Concerto in D minor, begins interestingly enough. With the piano planted upstage center and before the dance formally begins (although, obviously, it already has) two dancers, shortly augmented by two more, surround the piano, stretch and preen to it, and then align themselves on each side of it like decorative figurines. With each costumed in a pink/pale orange skirt and black long-sleeve turtleneck, the presentation looks very cute, and very sweet. After the pianist (Elliot Figg) is seated, Wiles, dressed identically to the other four dancers, enters and as Bach’s music begins, begins to dance, soon followed by Regnouf and Strickland, and then Andreikaite and Komyshan. Although each of the dancers is introduced to advantage (particularly Regnouf and Strickland), Wiles is the dance’s visual focus for the other dancers’ inspiration and instruction – the equivalent of the pianist around whom the other dancers initially gathered. 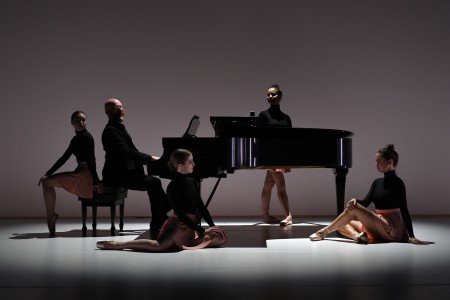 Experience, a duet for Komyshan and Natalie Stys to music by Ludovico Einaudi, (played by Figg on piano and Angela Kim on violin), is a pas de deux that describes a partnering relationship between two women, in the process showing off the dancers’ strength (at one point Stys lifts Komyshan, who appeared to be the taller of the two), flexibility (particularly Komyshan, a striking, exotic-looking dancer), and athleticism. They dance together with each other, roll over each other, pull each other across the stage, and, ultimately, go their separate ways for no discernable reason. Both dancers did a fine job, but the dance itself as an exploration of women partnering women needs amplification and more fluid interaction. 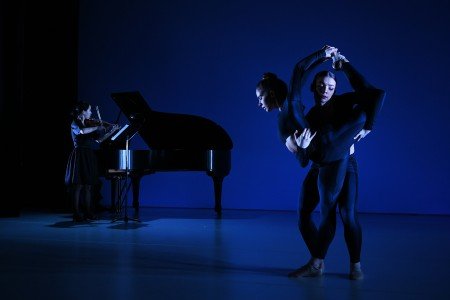 Each of these dances is pleasant enough, but none is particularly distinctive or innovative.

And that, in a nutshell, is one of the concerns I have with the program, and with BalletNext. Integrating jazz movement into ballet choreography isn’t a new idea, nor is integrating “street” movement – which isn’t specifically highlighted in this program (although it could be seen in certain movement combinations) but was in the company’s previous programs. Women partnering women has been done with greater finesse and purpose, and demonstrating the non-disability of a disability isn’t novel either (although, admittedly, it’s unexpected in a ballet environment). In the end, and notwithstanding its stated intent to break free from systemic ballet constraints, BalletNext’s focus is still ballet movement – as influenced by and adapted to movement that is not characteristically balletic. There’s nothing wrong with that – on the contrary, in a dance environment that seems to emphasize angularity and staccato expressiveness, to me it’s refreshing. But in a geographic area that features a plethora of current and former ballet dancers attempting to forge their own independent paths with more “forward-looking” contemporary movement, and where even mainstream companies are attempting to attract a wider variety of audiences with more varied presentations created by a more eclectic group of artists, that’s nothing unusual. 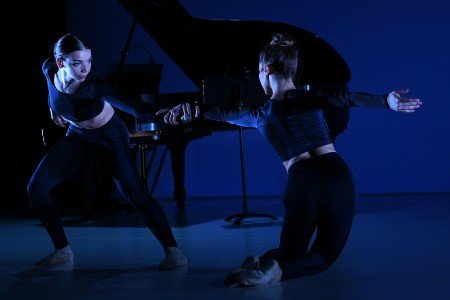 Similarly, Wiles’s choreography isn’t bad, but there’s nothing extraordinary about it either. It has few “rough edges,” but in this context choreography that’s more adventurous might prove more stimulating.

More critical, however, is that after seven years the company is in rebuilding mode. Aside from Wiles, only two of the dancers – Komyshan and Andreikaite – have been with BalletNext more than a year (each two years); the other three are in their first season with the company. That explains a bit of the lack of polish I saw in the evening’s first piece, and perhaps Wiles’s decision to be the focal point for those ballets she was in. But to me, that’s a distraction. While there is no doubt that Wiles still has dance performing years ahead, she stands out both physically and technically from the others, and that’s not good for the others. Some measure of stability, and performing independence from its founder, will be essential if BalletNext is to advance to a higher level.