BalletX manages to light up the virtual screen again in this November’s World Premiere Event of Three Short Films on their innovative BalletX Beyond streaming platform. On opening night, Christine Cox, Artistic and Executive Director of BalletX, hosted a live conversation on Zoom with the choreographers about the works, featuring excerpts of the pieces and a live solo performance of Richard Villaverde dancing an awe-inspiring piece from The Beast in the BalletX studio.

Saudade, choreographed by Mariana Oliveira, opened the lineup of virtual films. Oliveira described her inspiration for the piece as the term “saudade” which translates from Portuguese to “nostalgia,” which she states is the sentiment she herself feels frequently of late and speaks to so many viewers in the moment of current events. Elliot deBruyn filmed Saudade in the gorgeous stately Stoneleigh House and gardens in Villanova, Pennsylvania in a tone reminiscent of vintage film noir. 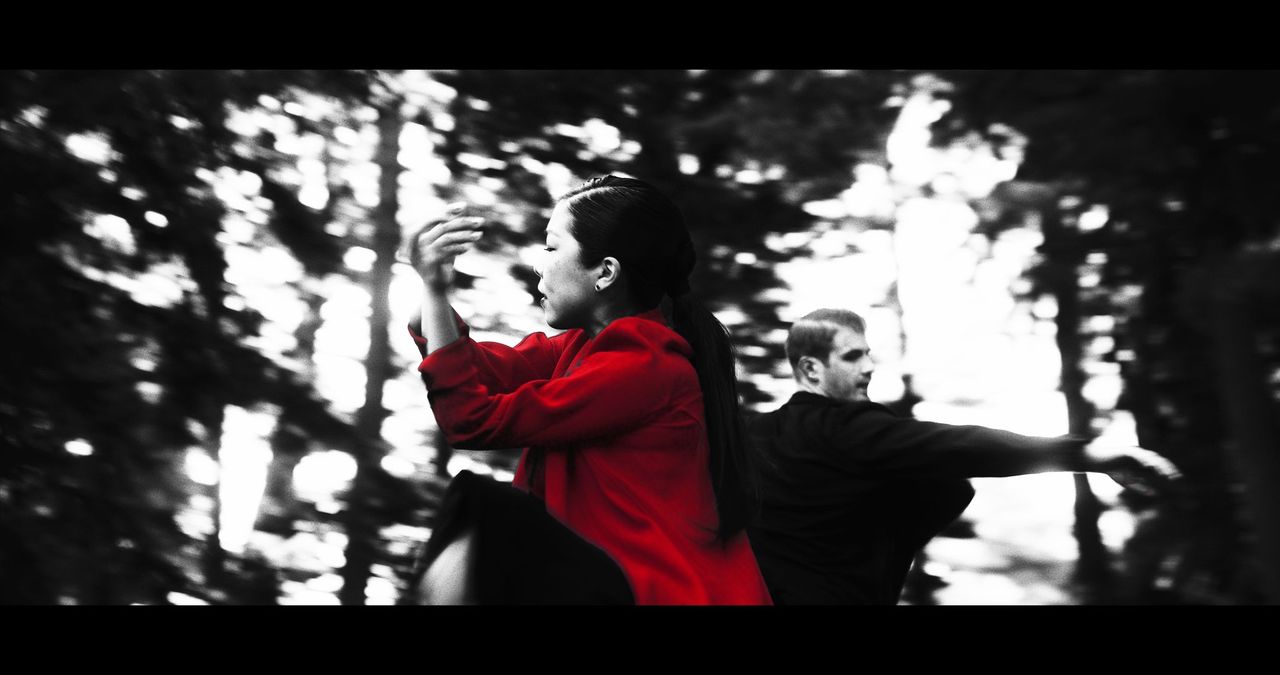 Zachary Kapeluck opens the piece walking through the architecture of Stoneleigh House in a somewhat detached manner and then happens upon a book. He sits to peruse the pages of this book and halts upon one where his fingers touch a page, and a bright red shape is seen on the page starkly contrasting the black and white of the imagery. Simultaneously, Andrea Yorita’s arm cloaked in a bright red coat reaches from behind him and touches him. This moment visually launches him from the chair where he rests reading to an outdoor garden landscape where he and Yorita dance among the trees.

The artistry of Yorita’s red coat contrasting their otherwise formal black attire amongst the black and white trees is genius in creating the proverbial red thread. Yorita and Kapeluck dance a beautiful pas de deux. Their dance is nuanced and complicated, with some intentionally intriguing interactions of a gentle push and pull from one another. Yorita’s fluid extensions are breathtaking.

The dancers’ visages do not translate a sentiment of joy, but one of reflection. They offer a clear perspective of watching a memory that is historic and meaningful, but they themselves appear stoically distant. Oliveira set the piece to Architecture to Live by Antonio Carlos Jobim, whom she hails as the father of the bossa nova musical movement.

Saudade moves dynamically through settings in the Stoneleigh House, using another intriguing moment of Yorita looking into a painting on a wall that launches her into another pas de deux with Kapeluck. The piece closes with Yorita entering a vintage birdcage elevator and pulling the black gated door shut behind her as she looks out. With little editorialization the piece speaks of times past, things left behind, and the stoic and strong way in which we find ourselves moving forward. It is simultaneously haunting and inspiring and will stick with viewers long after watching.

The Cycle, choreographed by Robbie Fairchild, is an exceptional piece of artistry in its attention to setting, costume, music selection, and every small detail. Giacomo Belletti filmed The Cycle in the lush, verdant landscape at Longwood Gardens in Kennett Square, Pennsylvania. Mark Eric oversaw costume styling, and the dancers wore beautifully luxurious gowns by Marchesa. Fairchild described the decision to adorn the dancers in the most beautiful costumes because the piece was intended to place the dancers as part of nature in all its grandeur, and there could be no costume more fitting. The piece was set to On the Nature of Daylight by Max Richter, which is also a strikingly delicate and graceful musical choice.

The piece opens on a perfect flower, and the camera then moves looking up through the branches of trees to the sunlight breaking through. Stanley Glover and Roderick Phifer are the first dancers on screen, lying in a thin layer of water in black pants and suit jackets. The first movement the audience is privy to is the stark motion of an outstretched finger then a slight reaching of a hand as they reach for one another over the glistening reflection on the water.

In The Cycle, the camera moves in an entirely fluid manner from dancer to dancer in varied and beautiful landscapes in the gardens. The beauty of the piece lies in the brief images we are offered of understanding the space the dancers occupy in this setting; the dance is truly the thing of which art is made. In some moments, the camera visualizes the dancers through tall grass or with a reflection of sunlight on the lens. Some of the movements feel intentionally muddled, almost primordial and violent, at times, and in others graceful and fleeting.

This piece is profoundly meaningful in the opening rise and the closing fall of the dancers in their respective natural spaces. It is at once an ode and an elegy to the fragility of beauty and our confusion in understanding it at times. There is a heartbreak entombed in this piece that could not have been captured so precisely under any other circumstances. BalletX is the birdsong we are all longing for in the vacant space we are inhabiting, and The Cycle is the piece that cuts us to the heart.

New Heights, choreographed by Amy Hall Garner, takes the viewers on a jubilant and dynamic celebration of the murals of Philadelphia. Like a bomb, Francesca Forcella explodes New Heights open, drawing the audience in with her face and eyes and then running, leaping, and turning around the Start from Here mural by Isaac Lin. Forcella’s camera presence is something new for a dancer to imbue so flawlessly. She moves effortlessly, like she is flying, and for a moment the audience feels she might dance up the walls themselves and we would be more than happy to go along with her.

New Heights is a perfect example of BalletX’s capacity to bend the rules of ballet without breaking them. In so doing, they create something that honors our time and space, acknowledges the creative obstacles art is facing today, and then smashes those obstacles to bits like they were nothing. The dancers move so powerfully through their spaces, making use of every geometric line and shape on the landscape provided by the murals, Soul of the Black Bottom by eL Seed and Untitled by Nate Harris, we as audience want to jump in. It is amazing to watch how these murals that inhabitants of Philadelphia walk past everyday change from inanimate objects to moving pieces of art, and they will never look the same again.

BalletX deserves every praise for the work they are doing on the virtual BalletX Beyond platform, which is absolutely ahead of its time and a model for dance companies everywhere. In a moment when so many people are struggling with next steps and wondering where life will be moving next, BalletX is the inspiration we all need to look to the future. If creativity feels like this now, there is no telling what the future will hold. BalletX is breaking down every kind of barrier, and things are looking very bright indeed.