BalletX’s first virtual event in 2021 marks a reflective yet powerful ode to the current climate of the world we are all inhabiting. BalletX’s bursts of exquisitely edited film are an unparalleled architecture for dance lovers to find artistic nourishment in this time of desolation from our love of the theater and performances as we remember them. This evening’s selections revealed a unique archive encapsulating the dynamic struggle between the dissension and beauty of life at a time in history riddled with never-before-experienced perils yet full of grace and potency. 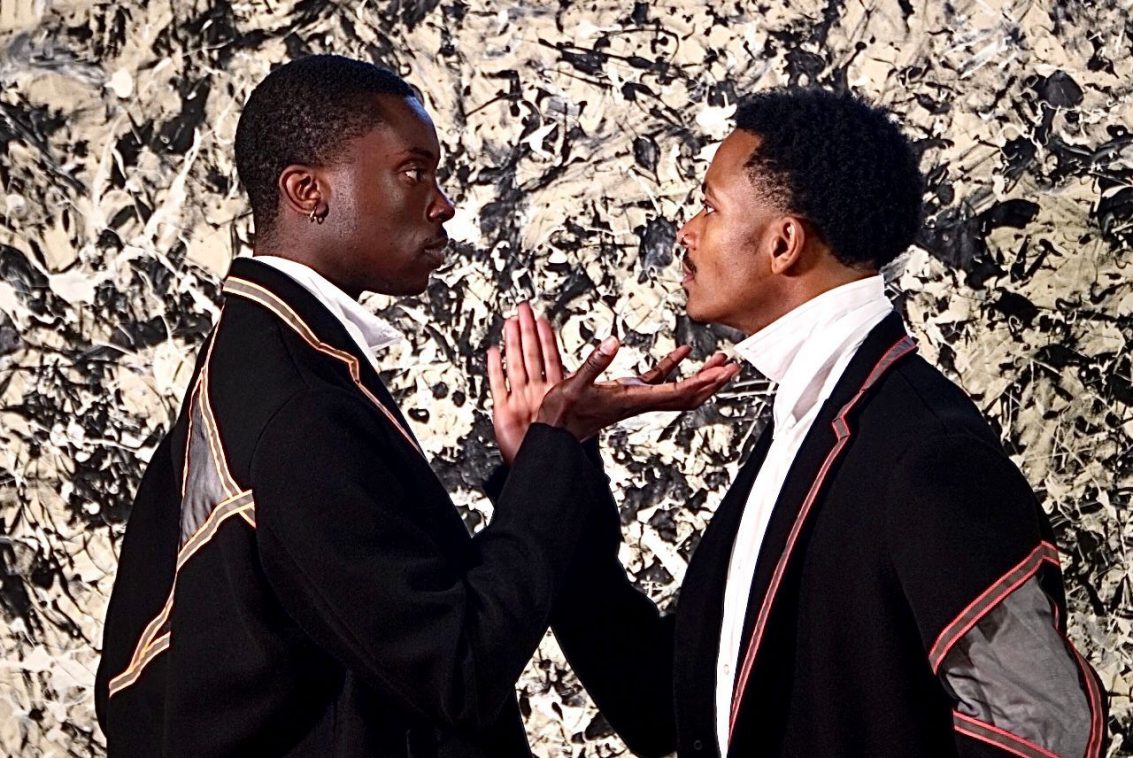 The first selection was Two X Two choreographed by Tsai Hsi Hung. Stanley Glover and Roderick Phifer dance a moving duet set to the music of Luca D’Alberto set in The Franklin Institute’s Pepper Hall, the original reading room for the first Patent Library in the United States. D’Alberto’s transcendent score sets the perfect musical backdrop for this piece because it is so flowing and other-worldly, yet Glover and Phifer square off like two warriors in battle, their initial movement of graceful impact towards one-another signifying a competitive force between them.

Hung described how the piece was intended to exemplify harmony and dissonance between two dancers, one representing a tiger and one representing a dragon. Glover and Phifer are the perfect embodiment of these two mythical creatures. They start fiercely into each other’s faces and at times move discordantly and then transition into beautiful congruous intertwining of arms, legs and bodies with one another. The two are exceptional dancers. and their prowess in movement and ability to move so synchronously together is awesome to behold.

The vibrancy of Two X Two is in this message, that the fight itself is power, and this fight depends on the interplay with another life force. The costumes, designed by Marc Eric, are described as “ceremonial garb” and the dancers make use of their long jackets like capes, moving them like fighters as they spar off. The geometric triangular cut-outs in the jackets against the solid fabric suggest the significance of these empty spaces.

Set against the backdrop of the empty bookshelves of Pepper Hall, one can only envision the potential of these spaces yet to be filled, history yet to be written, and the hope that if a fight like this fills the empty spaces, history moving forward will be nothing short of a phenomenon. Two X Two would likely be the piece returned to watch most often on a streaming platform because it is an efficient and breathtaking source of inspiration.

The second selection, Heal, choreographed by Manuel Vignoulle, was filmed in various locations in Philadelphia by Daniel Madoff, including the Awbury Arboretum, West Mill Creek Park, and Washington Square West. Heal is set to the music of the vocal group Li Osc’, creating a religious overtone to the piece, as if one is visiting an ancient place of worship. 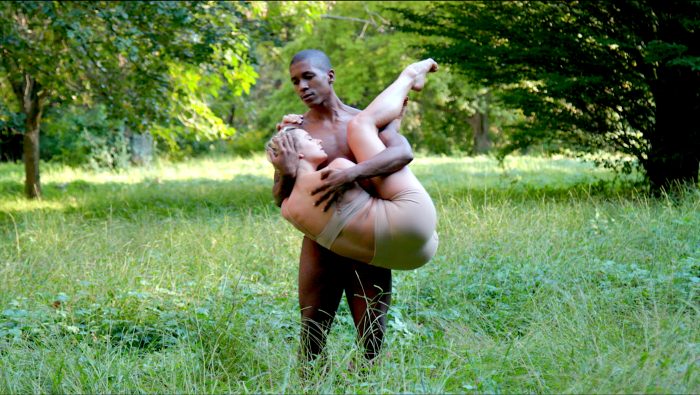 The piece opens on Roderick Phifer, wrapped in a long white bandage covering his torso and entire face and head, in a black suit jacket and pants. He appears to struggle with the bandage on his face, pulling to set himself free. Concurrently, Brake Krapels dances in a separate film sequence pounding and struggling in a corner of a wall set against a mirror. His clothes are dark grey, the wall is dark grey and looks almost padded, reminiscent of a person trapped in a cell of madness. His movements are graceful yet erratic, emoting an explosive energy in such a space of confinement. Shawn Cusseaux and Skyler Lubin round out the dancers in this piece in a gorgeous pas de deux set in an amazingly lush and verdant outdoor space. Their poignant interplay is moving to tears.

The stories enfold simultaneously. Phifer breaks free of the bandages he was wrapped in as Krapels’ figure moves from the space of confinement to the outdoors and ultimately dances full force on the ground in the mud. Phifer and Krapels’ acrobatics and agility in their solos make the viewer question at times if the film is rolling in reverse. Their movements seem to defy gravity and the normal evolution of space and time, cleverly making the viewer second guess their interpretation of events.

Cusseaux and Lubin’s duet is poignant and strong; their minimalist attire allows the viewer to see every detail of the grace, accuracy, and strength of their bodies. Lubin’s feet are truly remarkable; the perfect shape of her toes pressed against the sky against those painfully perfect arches as she appears to climb a ladder upside-down on Cusseaux’s back is breathtaking.

The piece culminates as Krapels rises from the mud, Lubin carries Cusseaux in a gravity-defying lift, switching to Cusseaux carrying Lubin, and finally resting on Phifer’s bare face looking up at the sky. Each artist is suspended in a moment where they are supported or freed from that which held them. Their visages embody the relief of breaking free but also the bewilderment of this newfound release.

The secret to the magic is held in moments that could not be recreated onstage, like the close-up perspective of Phifer’s profile and Krapels’ disoriented impression as he rises from the muddy ground, covered head-to-toe in mud. These moments could never have been realized without the need to pursue innovation in dance performance. BalletX shows us yet again, the necessity of evolution and innovation while we are all feeling confined may ultimately be that which sets us free. The piece baits the question when are we truly healed? And even if we are freed from that which bound us, what do we do next?

The third and final selection, THAW, choreographed by Francesca Harper, is an excerpt from Unapologetic Body, set to the music of Sandoval and slowdanger. The piece was inspired by the Supreme Court’s ruling in Loving v. Virginia and the work of Alice Dunbar-Nelson, a Philadelphia poet and social justice advocate – and the subject of I Am an American, a digital exhibition by The Rosenbach and Free Library of Philadelphia. The inspiration for THAW is so significant and there is some extraordinarily innovative artistry in its production. Some of the opening portion of the film might have been a bit too lengthy and redundant, but overall the concept was very intriguing. 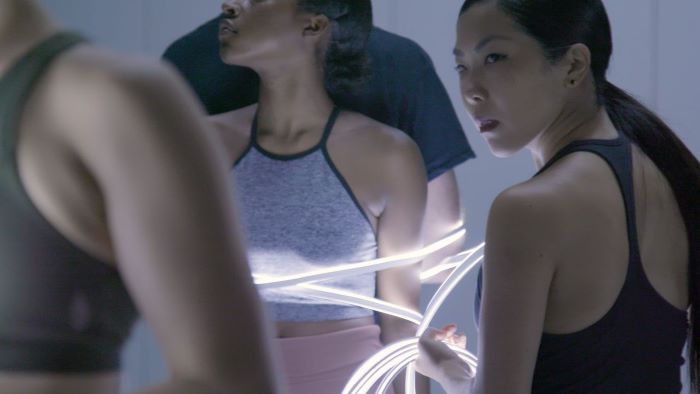 All seven of the BalletX dancers featured in this piece are exceptional and their technique is flawless. Harper makes use of so many powerful metaphors in staging this piece. There is a moment reminiscent of Phifer’s bindings in Heal when Chloe Perkes and then Andrea Yorita in a separate film shot are wrapped in a rope of bright light. At first, Yorita calmly interweaves herself with the rope and ultimately frantically dances against its hold. The image of the rope of light traverses the entire piece, with various dancers being wrapped in it and interacting with it differently throughout the piece.

Another interesting metaphor utilized throughout the piece are light boxes which are bright white on one side with a mirror on the other side. This concept of boxes we can hold in our hands that seemingly control our perspective reverberates throughout the piece. The dancers look on one another dancing through cell phones they hold in their hands at different times. There are even separate floating boxes above the held cell phones at times, giving the viewer a different perspective of the dance from each encapsulated view simultaneously. This image gives the viewer pause – it is a window and a mirror to life in the current era, as we live enslaved during our own confinement by the screens of our computers, phones, and televisions to define our interactions with the world.

Blake Krapels and Ashley Simpson look into the screen at us at different times in the piece, like they are seriously examining a self-portrait in a cell phone frame. The piece closes with a moving duet danced by Krapels and Simpson to piano music and a reading of a poem by Dunbar-Nelson. As Krapels and Simpson move with such care and precision together, words of the poem fill the space. A voice reads about “wistful able days when lovers meet and wander through the fields in rapture sweet” and “now unwittingly you’ve made me dream of violets and my soul’s forgotten bloom.” The words remind us of times past and the hope of things to come, and settles on an image of where we are as Krapels and Simpson dance comes to rest surrounded by the white boxes and both staring into one of them together, then running to the camera to stare at us as we stare back.

BalletX delivered yet again a profoundly important body of work, speaking so poignantly to the inspiration that we find all around us, even in times that feel like confinement. The care and attention to every detail of the work cannot be adequately described. The production speaks to the mindful contemplation undertaken to enliven our “forgotten bloom” and break free from whatever binds us. This virtual premiere was a birth of life, love, and inspiration through BalletX’s thoughtful approach to this work, which  we all need to see during these unprecedented times.