BalletX, the Philadelphia-based contemporary ballet company that has achieved significant critical acclaim in the ten years since its creation, returned to the Joyce Theater Tuesday night, the opening night of a six-day engagement. The company last appeared at the Joyce a year ago, bringing with it an evening-length original story ballet by Matthew Neenan, a company co-founder, based on the life of an obscure aviation pioneer. Titled Sunset, o639 Hours, I found it to be a wonderfully engaging presentation. This year’s program is an assemblage of three ballets: one each by Neenan, Jorma Elo, and Trey McIntyre. Aside from terrific performances by the company’s dancers, however, this program is less successful. The Neenan piece, Show Me, created in 2015, is not Neenan at his best. Elo’s 2014 dance, Gran Partita, is somewhat more conventional, but it has considerable merit. The most interesting, although maddeningly not as good as it might have been, is McIntyre’s Big Ones, which premiered earlier this year. 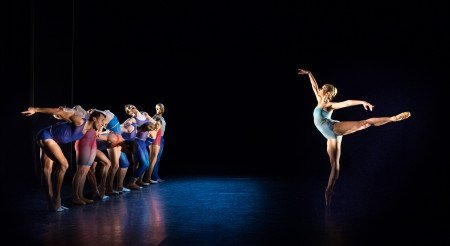 Big Ones is a puzzlement – which I suppose is appropriate, as it’s choreographed to songs by Amy Winehouse, the British chanteuse whose career was somewhat of a puzzlement – in 2011, at age 27, she was found dead, reportedly of alcohol poisoning, following a near-decade of artistic successes and personal challenges. There’s certainly fodder here for considerable choreographic commentary, but in pre-premiere interviews McIntyre denied that the choreography reflects Winehouse’s life, and the piece doesn’t appear to have any particular underlying agenda.

However, there’s more content here than merely emotional gloss captured in the largely abstract dances that together make up the piece, and it’s unlikely that Big Ones is not to some extent a commentary/observation on one or more facets of Winehouse’s life and career. Indeed, a quotation attributed to McIntyre in the program (“We are caught in a war between wanting to be great and wanting to be loved”), the only direction provided to the audience, would seem to suggest at least a minimal theme – even though it’s not a theme I discerned. More significantly, one dancer, Chloe Felesina, logically functions in the piece as a Winehouse surrogate. Be that as it may, the dance is an intriguing but ultimately muddy venture, enlivened by flashes of exciting choreography and interesting (but perplexing) stage imagery – and at all times by superb execution by the ten company dancers.

Winehouse’s pop, soul, blues, and jazz-infused sound dominates the dance. A compelling amalgam to me of Dinah Washington (I kept hearing Washington’s rendition of This Bitter Earth, which Christopher Wheeldon used as the musical framework for his pas de deux of the same name), Ronnie Spector (but lighter), and Edith Piaf (but heavier), her voice is impossible to ignore. And the songs themselves (including Rehab, Wake Up Alone, You Know I’m No Good, and a fascinating rendition of To Know Him is to Love Him) are a mixture of jaunty proclamation, matter-of-fact resolution, and profound but unacknowledged sorrow. 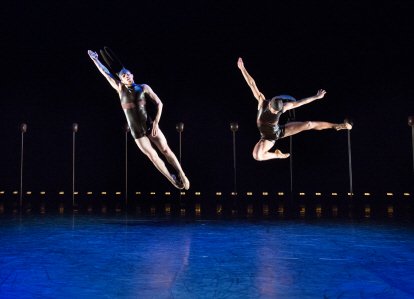 The dance is also dominated, for better or worse, by its presentation. The lighting, designed by Drew Billiau, initially bathes the piece in darkness, changing to dimly lit shadow (reflecting a phrase in the first song, Rehab (“living in shadows”) and then expanding to roughly match Winehouse’s increasing success and notoriety – from theatrical to exploitative. The basic costumes (by Reid Bartelme and Harriet Jung) – leather shorts and tops – make a statement without drawing undue attention or being physically restrictive. And the minimal set (by McIntyre) fixes the piece in a recording/performing/party ambiance. But the headpieces (an integral part of the costumes), though certainly interesting, are more problematic.

As the curtain rises, the upstage area is populated by an arc of tall, thin, free-standing metal-like poles that look like microphone stands. Atop these, covering the ersatz microphones, are what we later learn are coverings that the dancers place on their heads, which come with long extended “ears” attached (looking like a cross between antennae and rabbit ears). They’re certainly “Big Ones” (as in, possibly, Big Ears) – with which one might be attuned to the latest music trends, or just be identifiable as part of an in-crowd or distinguishable from another (as, in a past generation, was a Mickey Mouse cap). But there are lots of potential explanations, and I doubt that these were the only possibilities on the creative team’s mind. Be that as it may, these caps (with those ears) are so distinctive that they had to have had some meaning to the artistic team beyond simply being an absurd reflection of an absurd world. But they’re an annoying distraction, since it’s impossible to ignore them, as well as an insoluble problem, since they’re significant in the context of the piece. A little enlightenment would have helped.

McIntyre stages the piece to superb effect, with smooth transitions from scene to scene even where the scenes are strikingly different choreographically. That being said, much of the choreography, besides being frenetic, is pedestrian – and the effort to make a point outside of the frenzy of activity is on the one hand too opaque to discern (Felesina summarily removes the ear-y cap from the head of her companion, a feckless Daniel Mayo); on the other hand too transparent (at one point Felesina carries a man on her back – a burden she must carry).

Unifying it all is Felesina’s compelling performance as the Winehouse surrogate (there’s nothing that identifies her character as such, but it’s difficult to accept that the role was conceived of whole cloth). From her first hesitant stage entrance, alone, though a wonderfully nuanced duet with Mayo, to her somewhat defeated exit as the piece ends – also alone, Felesina is both participant in, and observer of, one component of Winehouse’s ongoing tragedy. In my review of last year’s program, I highlighted Felesina, describing her as the soul of that ballet. She’s the soul of this piece as well. Her portrayal succeeds in making Winehouse come across as vulnerable and sympathetic – no small accomplishment. 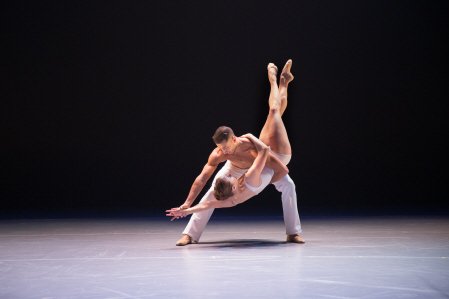 Until Boston Ballet’s most recent visit to New York in 2014, which included a piece choreographed by Jorma Elo, its Resident Choreographer,  I had not been particularly impressed with what I’d seen of Elo’s work. Plan to B changed my opinion, and Gran Partita, a suite of dances choreographed to a diverse assortment of classical music – excerpts from larger pieces by Alban Berg, Mozart, Monteverdi (vocal), and two by Bach (one a vocal) – is another fine piece of work.

A contemporary, abstract, ensemble dance with considerable emotional gloss where appropriate, Elo’s choreography here, like the music, varies from one excerpt to another, and significantly within each segment so that nothing looks repetitious. At times the movement is so fast the action on stage looks like a beehive colony; at other times it’s regimented into discrete groups (or one dancer in visual opposition to a line of the others), complemented by an occasional solo or quietly complex duet – including one brief, stunningly simple sequence in which the dancers (Francesca Forcella and Gary W. Jeter II) place their heads together horizontally one atop the other, with their arms thereafter pairing above and below their heads, assembled vertically like a totem caress. Neat. I could have done without the too prevalent crotch-lifts (at least that’s how they appeared from my viewpoint), but there was nothing untoward about them in context. It’s delightful to watch, without a hint of contemporary orthodoxy or nihilism. 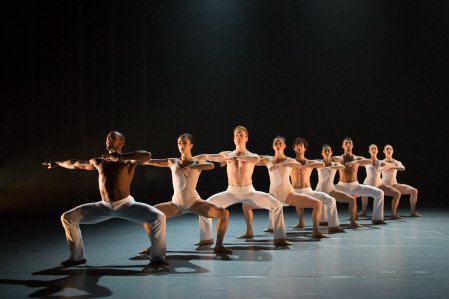 That having been said, Gran Partita is not all without a creative axe to grind. Aside from being classical, the musical excerpts that Elo has curated are so diverse as to be seemingly incompatible. To my ear, the assemblage can considered as a criticism of similar agglomerations of music that may satisfy a choreographer’s individual needs but that don’t achieve a unified whole either musically or choreographically. As if to drive this home, Elo separates his musical excerpts, as well as his choreography, into distinctive segments, each one prefaced by one dancer pounding his hands onto the stage floor like a toddler having a musical tempo tantrum. I initially found this annoying, but it’s so obvious an intentional gimmick that I came to accept it as a commentary rather than just a choreographic quirk.

Neenan, Pennsylvania Ballet’s Resident Choreographer, created Show Me for last year’s Vail International Dance Festival, purportedly (according to Neenan’s brief program note) as an effort “to show off all the dancers involved – both their physical prowess and their idiosyncratic personalities.” If that effort was evident at Vail, then something was lost in transition here – Show Me as now presented shows little in the way of individual personalities or capabilities. Instead, the piece is a thoroughly serviceable but relatively undistinguished contemporary ballet that is curiously unfocused.

Show Me is choreographed to three songs (Simpson’s Gap, by Padma Newsome, Show Me, by Aoife O’Donovan, and Tralala by Christina Courtin, all of which are played instrumentally by the string quartet Brooklyn Rider) which collectively have a pleasing folksiness to them that to some extent the choreography emulates (for example, at one point, one dancer interrupts his ballet steps to dance a brief soft shoe). But the choreography doesn’t go anywhere or present anything. 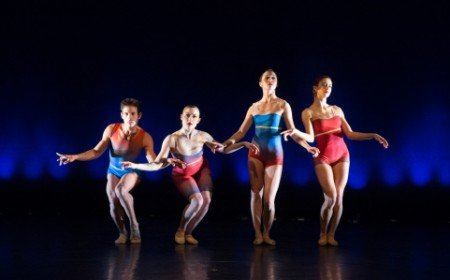 After an initial period in which all the dancers are assembled on stage as if in some fugue state, moving slowly and dispassionately to their inner voices, the dancers eventually separate into two groups of four (there are ten dancers, so obviously the separate groups are occasionally augmented by the remaining two), with the ‘front’ four (three men and one woman) dividing into pairs, then various permutations of four. The rear four (one man and three women) however, remain relatively stationary, like a chorus. Eventually, this rear group begins to move slowly and deliberately, like back-up dancers to a slow-dance vocalization, while the four in front are more active. Later, the rear four simply stand there, like sightseers or stargazers, pointing out ‘things’ they presumably see somewhere – although clearly not the four dancers in front of them. But despite what appears to be an effort to make a statement, the distinctive staging dissipates like stage smoke: The audience never comes to understand why this happens or what, if anything, it’s supposed to signify – it’s as if the highly distinctive action has nothing at all to do with the dance. The balance of the ballet is reasonably pleasant, including some dramatic en pointe arabesques and moments when several of the dancers break off into pairs and simulate kissing, but like the dance, simulation and non-specific playfulness is all there is.

Even though not all the dances in this program are successful, with its accomplished group of dancers and Artistic Director (and co-founder) Christine Cox’s ambitious agenda of presenting a broad range of contemporary ballet, BalletX continues to deliver outstanding performances and interesting dances. This is the company’s second visit to the Joyce in two years, its first to command a full six-day engagement. An annual visit would be a welcome addition to New York’s dance calendar.