BalletX Spring Series May 2022 was a sublime and balanced program of incredible premieres in this period of emergence after a longstanding era of isolation for many theater-goers over the last two years. During the pandemic, BalletX spoke intimately to audiences by providing a dynamic and apropos virtual platform for their dance events.

On this gorgeous spring evening at The Mann’s spectacular outdoor venue, there was a real sense of celebration and optimism from the audience as they found themselves, maybe for the first time in a long time, in a theater seat anxiously awaiting the opening of the production. Prior to the show, the audience picnicked, strolled the grounds, and enjoyed the energetic sounds of MadBeatz Philly as they paraded through the venue.

The world premiere of Midnight Circus, choreographed by Annabelle Lopez Ochoa, was the first selection of the evening. Ochoa described her piece as “a vaudevillian affair with a Cubist flair.” With any world premiere, there is always a curiosity aroused in the wonder of what will come. In this instance, the concept of a midnight circus, intriguing in and of itself, beguiled one into a sense of trepidation initially, like we were stepping out on a tightrope with a disquiet at what might lie ahead. 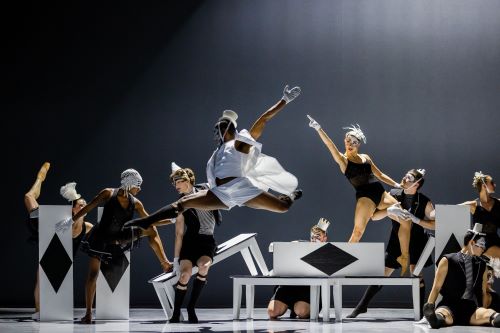 Shawn Cusseaux [featured] with BalletX Company in Annabelle Lopez Ochoa’s “Midnight Circus”
Image: Vikki Sloviter for BalletX
Shawn Cusseaux was the highlighted soloist who opened Midnight Circus. His costume was reminiscent of a mélange of mime, harlequin doll, and vaudeville actor – white shorts and shirt, white face paint with diamond shapes outlined, and a tiny white top hat cocked to one side. His performance as unintentional circus master was precise and clean with surreal jumps, turns, and lifts. His technical prowess was overshadowed as he convincingly played the dual parts of puppet master on the one hand, and sad clown crying when his cast leaves him, on the other. Andrea Yorita beautifully partnered with Cusseaux in a daring duet with impressive extensions and interesting lifts.

The sets for Midnight Circus were small white rectangular tables, painted with one black diamond on the tops, lending themselves easily to the Cubist intentions of the piece.  They were continually and seamlessly rearranged during the piece as the music and costumes also shifted incongruously at times.

The power of this piece rested in the sense of ensemble of the cast as they worked together artfully shifting sets, clothing, and dance genres and moving seamlessly as a cacophonous yet cohesive team of dancers and storytellers. There were moments when the music might have sounded sad, but the dancers were smiling and flapping their hands as if in a moment of jubilation. This motion from the sublime to the ridiculous was enticing.

Midnight Circus engaged the audience with the intrigue of such inventive work. Being among the first to see it was exciting. After our initial feeling of awkwardness stepping onto the tight rope with these performers, we were elevated to that feeling of the first burst of champagne bubbles in your mouth, having tried something new and finding it magnificent. The beauty of the piece rested in the nuance around the feeling of solitude and oneness while being surrounded by the sometimes-dissonant movement and energy of others. This intention carried directly through to the night’s next selection, The Last Glass.

This was the BalletX premiere of The Last Glass, choreographed by Matthew Neenan. Like Midnight Circus, the subtle details of the artistry played the same intentional hat trick on us. We were captured, noticing less the technical points of the piece, but more the raw and exposed feeling it created.

Neenan choreographed The Last Glass to the music of American Indie-rock band, Beirut. The music and the lighting were the pure set for the entire story, and subtle adjustments in light alone altered the entire story line for a particular character. Costume designer Martha Chamberlain’s costumes provided a tiny detail here and there that added a punch to the story. The hot pink pointe shoes worn by Skyler Lubin and Savannah Green’s characters could not go unnoticed and are the ironic “cherry on top” to this story. Lubin and Green’s performances carried a delight reminiscent of the one-more-for-the-road adage, when things feel good right now, so hold on tight for one more minute.

All of the dancers were technically impeccable in this piece, but their theatricality was unparalleled. The scene opened on a wild street-parade with varied characters and different stories. With simple suggestions, the characters’ stories were entirely identifiable – two young ladies with their backs turned to us flounced their short tutu skirts up and down; a couple of young lovers laughed in bliss; an intoxicated couple tried to make it home.

Ashley Simpson and Shawn Cusseaux danced as the intoxicated couple at the party initially, but later had a delightful duet in costumes reminiscent of a day on a beach, her frilled shorts and crop top, set against a slight change in the lighting to an orange. Simpson’s jumps were effortless and joyful. We felt we were right there with them on the beach.

The absolutely gut-wrenching appearance of the character played by Andrea Yorita juxtaposed the opening scene of The Last Glass, and at once the audience’s heart broke. Her character silently and desperately walked slowly across the front of the stage, grasping gently at her midsection, hands clenched then outstretched, seeking, longing; her face in utter despair. 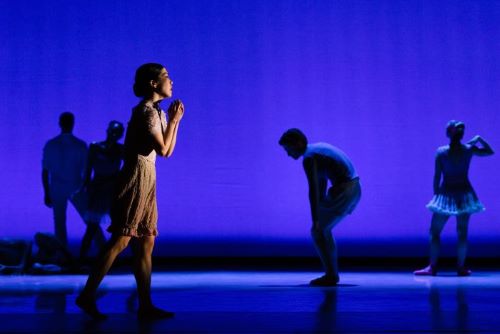 Andrea Yorita [featured] with BalletX Company in Matthew Neenan’s “The Last Glass”
Image: Vikki Sloviter for BalletX
Yorita’s theatrical performance was compelling and tearjerking from its beginning to its end in this piece. Her presence was artfully forced into the front of your lens.  At first the audience felt they should avoid looking at her, that she was a distraction, but then we realized her sorrow is, in fact, the story.

The story became clear when she was joined in a duet by a lone character, danced by Blake Krapels, dressed in long white pants and white button-down shirt. Their first dance together was to A Sunday Smile, the lyrics: “you know my wishes are sincere / What’s to say for the days I cannot bear / We burnt to the ground / Left a grave to admire / And as we reach for the sky / Reach the church of white.”

Their duet was so moving with sweeping lifts and extensions and emotional interactions, which could be interpreted as romantic love, but not necessarily. The emotion they created was poignantly familiar to anyone who has ever loved. The embodiment of eros and the fear of its great loss propelled this story forward.

Krapels’ dance weaved in and out among the other dancers on the scene at times.  He and Yorita interacted, but then he departed, and she was left alone again. In breathtaking finality, she watched him, her hand outstretched, as the troupe of dancers joined as couples leaving the stage.  The couples danced with joviality, and he danced along behind them, sadly leaving her behind.

She was alone amid this boisterous crowd throughout the piece, and in a tolling finality. The performance by Yorita and Krapels was compelling as a symbol of the loves, dreams, and wishes we have lost, and at times are unable to bear. The sensation was so relevant on this evening in May 2022, after so many have suffered a loss of one kind or another, one could not help but feel we were being spoken to directly. Yorita and Krapels drew the audience to their feet in a standing ovation, with more than one viewer brushing tears from their eyes.

In a brilliant sweep of motion, the audience was brought back from intermission to the final selection of the night – Exalt, choreographed by Jennifer Archibald. Archibald was inspired by the words, “Music can heal the wounds that medicine cannot touch,” written by Debasish Mridha. Exalt was truly this much-needed healing repair. The opening movements were danced ironically by Andrea Yorita, who emotionally exalts from where we had just seen her in the prior selection.

She and Zachary Kapeluck embodied a power, owning the space of stage, moving with surety, grace, and strength in the opening solos. The costumes, designed by Olivia Mason, were black leather kilts with full-length black leather leg coverings for the men. The women were in black leotards with patterns of black leather binding or weaving across them, the clothes of warriors. 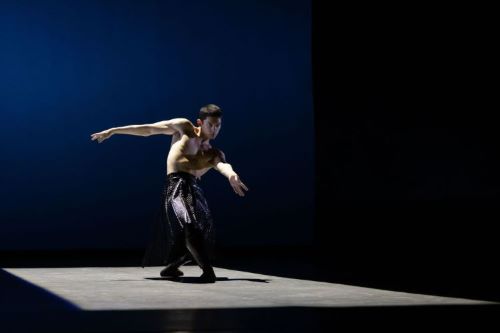 This piece was innovative and dynamic in its cross-referencing of multiple music and dance genres. The audience whooped and yelled with delight at Jonah Delgado’s solo. Delgado was sharp, crisp, and graceful throughout the performance, but Exalt was truly where he shone. Francesca Forcella was another standout in Exalt.

Foremost Poets, the sound engineers for this piece, pulled together so much music to overlay in a fantastical onslaught of incredible sound, which set the stage for a similar overlay of ballet mixed with lyrical, hip-hop, and everything in between. The dancers were incredible. The female dancers ran and slid on their pointe shoes like they were ice skating at times, in steps that truly defied the laws of physics.

The ensemble moved together like a crowd where one dancer would arise here and there highlighted in movements of grace or force. This dance inspired the audience to rise to its feet, stomp, yell, clap, and cheer in celebration with BalletX. The roller coaster of emotion from this show ended in exactly the right place, sending us off in the night not fearing to reach for the stars ourselves.

Ultimately, every piece in tonight’s production was curated precisely to compel the audience to feel things in a way we might not have in a long time, or maybe ever. The intention around the journey from beginning to end was clear and the program spoke volumes.

If you missed this performance of BalletX at The Mann, be assured you still have a chance to see them there in the future. In an opening speech, Christine Cox, Artistic and Executive Director, described that the BalletX relationship with The Mann will continue so that audiences will be able to enjoy future BalletX performances there. Cox’s jubilation in speaking to the audience about future directions was palpable as she described that “we will keep dreaming and dreaming.” This is truly a celebration of art and life that you do not want to miss and I, for one, will look forward to watching these dreams come true.