What happens when ballet fans sit through Tchaikovsky’s famous music from the ballets Romeo and Juliet and Swan Lake? We inevitably see choreography in our heads. At least that’s the case for me. But there’s something else that happens when I go the symphony that might be different from your average attendee. As someone primed to notice movement, rather than concentrating on sounds, I often find myself enrapt by the musicians’ bodies, how they bend forward, the intricate tightening and sliding of fingers. It’s not dancing, really, but I watch these movements intently anyway. And the conductor? I’m always entranced! The baton goes up, around, in and out. It’s like watching someone crazily weave a tapestry. I know it’s strange, but following the baton is frequently more mesmerizing to me than the music. From my perspective as a dance critic, there are small dances taking place all over the stage as an orchestra plays.

On a recent Sunday afternoon in North Bethesda, Maryland, my gaze was glued to Marin Alsop, the Music Director of the Baltimore Symphony Orchestra, as she led her fine musicians. Her black suit had bands of red at the cuffs and collar. These punches of color reminded me of a bird’s wings as her arms rose and fell. At one point, she hunched her back and her arms moved into a circle in front of her, then stirred. I envisioned a pot of something boiling, notes leaping up like steam. Occasionally, she’d wipe her brow. Mostly, the angles of the violinists’ bows were aligned. They satisfyingly sliced the air above. I’m no music critic, but I can tell you the Baltimore Symphony Orchestra is fun to watch. 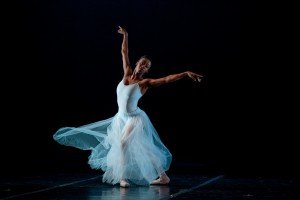 Baltimore School for the Arts in Serenade, photo by Meg Goldman

I was at the performance to see ballet students from Baltimore School for the Arts (BSA), a nationally recognized public arts high school, perform Balanchine’s well-loved Serenade. Serenade was first performed by students of the School of American Ballet in 1934, so selecting students to perform this dance “lesson” makes some sense. The BSA students were guided by Deborah Wingert’s staging and coaching by Heather Watts, both former New York City Ballet dancers familiar with Balanchine and his works. I can’t imagine a better opportunity for high school dance students than being able to learn from these Balanchine experts, and then to perform Serenade with a renowned orchestra.

My expectations were tempered by the fact that the dancers are pre-professionals. That’s only fair. BSA has some lovely ballerinas. Their level of maturity and experience is different, though, from that of more seasoned dancers. I could tell the young dancers put in a lot of hard work, and I applaud them for it. Surely they’ll continue to grow. It’s the little things (like artistic nuance) more than big ones (like the ability to complete multiple pirouettes) that act as dividing lines between students and professionals. I’d be interested to know how many of the BSA dancers plan to pursue a career in ballet. I wish those who do good luck! 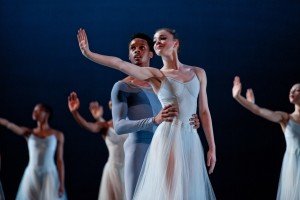 Baltimore School for the Arts, photo by Meg Goldman

Among the soloists, Sarah Knutson stood out to me as particularly stellar. She showed off unflagging energy and spirited expression, along with crisp technical execution. The remaining soloists did an admirable job, too. Anisa Cobb has beautiful long limbs and an elegant and restrained demeanor that’s captivating. Marlena Roberts glided through some strenuous choreography. Elye Bailey and Cameron Pelton held their own. Plus, many of the rest caught my eye in a positive way from time to time, embodying Serenade’s characteristic, almost spiritual moods.

As a group, BSA’s dancers delivered a Serenade appetizer, a taste of brilliance. There wasn’t perfection throughout, which would be next to impossible for a student group, but there were plenty of shining moments thanks to Balanchine’s masterful choreography, more than enough to make everyone happy, music lovers and dance lovers alike. For one, the sight of several ballerinas in long pale blue tulle skirts, standing still, each with an outstretched arm with a flexed hand turned up, is simply stunning to behold. Then the sudden, uniform, flip of their feet into first position takes one’s breath away, not to mention the final arched lift of a dancer high into the sky. Tchaikovsky’s rippling Serenade for Strings in C Major is alluring as well. Alsop’s parents were NYCB orchestra musicians, and as a child she watched Balanchine and the NYCB dancers bring Tchaikovsky’s music to life. Paired together, Balanchine’s choreography and Tchaikovsky’s music rouse the heart. Maybe it wasn’t a coincidence that just before the ballet began, toward the end of the intermission, a young man in the audience proposed marriage to his girlfriend. (This was apparent because of her joyous squeal, which resulted in a bunch of swiveled heads and smiles). The atmosphere is moving and romantic! 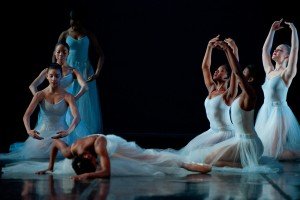 Baltimore School for the Arts, photo by Meg Goldman

In the end, although I enjoyed Tchaikovsky’s music alone, nothing in my view can top having the music accompanied by dancing. Serenade was the icing on the cake, and I feel sure the audience left the Music Center at Strathmore feeling uplifted.