Melissa Barak is a former dancer with New York City Ballet (1998-2007) who, after her performing career concluded, founded her own dance company in 2013. Based in Los Angeles, Melissa Barak Ballet made its initial appearance at the Joyce Theater last week, the final presentation in the two-week Joyce Ballet Festival. The three dances on the program – two choreographed by Barak, the other by former San Francisco Ballet principal Nicolas Blanc, all New York premieres – though lacking in what many some might consider distinctive choreography, left a highly favorable impression.

I had not previously seen Barak’s choreography, but based on the two dances presented, she’s quite good at moving groups of dancers around a stage in consistently varied and visually interesting patterns, and in milking the music for as much airiness and visual punctuation points as she can. The result, even in adagio sections, is an overall impression of exultant liquidity and an absence of stylistic quirks. Translated: Barak’s work isn’t innovative or particularly complex, and the choreography tends to focus on the same movement qualities repeated too frequently. But any deficiency in inventiveness is camouflaged effectively by exciting staging and engaging dancers.

The evening’s most successful offering was what reportedly is the company’s signature dance: the closing piece, E/Space. It’s not as unusual as it might appear to be, but E/Space is glorious entertainment. I’ll discuss it after considering the earlier pieces on the program. 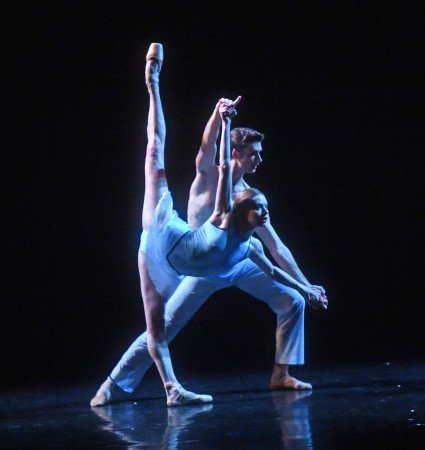 Barak Ballet dancer Julia Erickson,
here with Thomas Brown,
in a prior performance of “E/Space”
Photo by Dave Friedman

Cypher, which premiered in Santa Monica (where its “home” theater is located) less than two weeks before the company began its current tour, is a beautiful-looking contemporary dance, as much for Holly Hynes’s simple but gorgeous turquoise costumes as for the choreography. There are no program notes to illuminate this piece (or the others on the program), but I suppose Cypher is a reference to some secret “code,” in the choreography or the music or both. If that’s the case, I was unable to decipher it. That being said, Cypher is no more, and no less, an exuberant abstract ballet with moments of emotional gloss that give it essential texture, and a degree of visual coherence that makes it easy on the eyes.

The piece opens with the six dancers flooding the stage in a blur of high energy leg and arm thrusts. Some remain in view longer than others, particularly Lauren Fadeley (who began her dancing career at NYCB and whom I remember well from her years as a principal dancer with the Pennsylvania Ballet) and Brian Simcoe. At first I thought that Fadeley, currently a principal soloist with Miami City Ballet, was not well suited for this rapid-fire movement, but she proved me wrong: she can still dance up a storm. I was also impressed by Xuan Cheng, a principal with Oregon Ballet Theatre who brought emotional depth as well as quality execution to her performance, and her duets with Simcoe were particularly smooth and well-executed (possibly because Simcoe is also a principal with OBT). Jessica Gadzinski, Tiffany Smith, and Zachary Guthier completed the cast.

Blanc, a French-born choreographer who is currently Ballet Master and Principal Coach for the Joffrey Ballet, also has a NYCB connection. Two years ago he created a very interesting piece, Mothership, for that company, to a 2011 composition by Mason Bates. Mothership was an intriguing combination of angular, edgy, and yet somehow lyrical and highly balletic movement, filled with constant motion consistently surprising, and Blanc maintained the score’s futuristic theme throughout that piece, but did it in a way that made it an integral component of the dance rather than a curiosity. 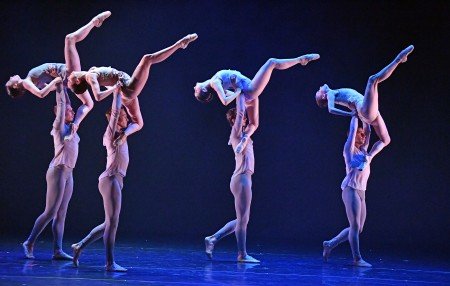 In Desert Transport, his second piece for the company (the prior one was Tableaux Vivants), Blanc again choreographs to a composition by Bates, and again explores a theme with a distinctive visual environment: instead of a futuristic, outer space ambiance, this time he explores the desert in general and desert transport in particular. One can feel the scorching heat (via Nathan Scheuer’s lighting design), and see the golden sand color (in the smashing costumes of gold/bronze designed by Blanc and Ruth Fentroy), and sense the panorama in Bates’s score.

But the dance sends mixed messages, and although I saw similar choreographic characteristics, I found it more enigmatic than Mothership, as if Blanc (and Bates) were making a jumble of statements about something that I couldn’t quite … decipher. Clearly it describes a hopeful but arduous transport, with one dancer in particular looking for something over the horizon, or straining to hear the sound of … something. My initial take was that the dance was a metaphor for the contemporary struggle of immigrants, or of pioneers of the American West. It couldn’t have been “about” Native Americans, I initially thought, because they already lived there and wouldn’t have been searching. But then the piece seemed to evolve with more of a Native American connection, including muted but characteristic tribal sounds that were added to, or a part of, Bates’s score, and I thought perhaps the piece was intended to capture a sense of searching for their lost desert home. In any event, the dance’s images are compelling, including the “community” of wanderers lifting that woman as if she were the figurehead of a ship navigating the desert waves. 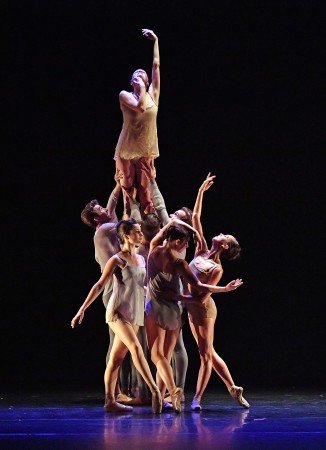 But I saw these images, as well as others, too many times, and as compelling as they were, they grew tiresome. And Bates’s composition has too many false endings – crescendos, which the dance reflects – which also grow tiresome with overuse. It’s not an uninteresting dance: on the contrary, Desert Transport has the makings of a fabulous and meaningful ballet, whether about Native Americans or immigrants or any group searching for a better life in the great beyond (even on a Mothership to the stars). But in its present state it’s a journey that, for a viewer, takes too long. Journeys, maybe particularly journeys wandering in the desert, take a long time – but they needn’t feel that way to an audience. The cast, however, was consistently superb. Led by Julia Erickson and Jorge Villarini, the dancers included Sadie Black, Robert Mulvey, Francisco Preciado, Evan Swenson, Hannah Wilcox, and a stunning Stephanie Kim, the dancer who encapsulated the image of wandering and searching.

E/Space was also a transport, but to a more congenial – and yet more exotic – place.

A collaboration among Barak, composer David Lawrence, and media designer Refic Anadol, E/Space takes the viewer on a ride down a digital rabbit hole. As the music begins, a geometric design is projected on a translucent scrim. It looks like a perimeter of lines, which gradually swirls fluidly into a tunnel of arching lines, visually collapsing further into an increasingly narrow space that looks the size of an eye. The projection takes the viewer into this eye, this different dimension of sight, this far-away dance galaxy, and then enlarges the lines to frame a performing space. Light then penetrates the scrim, revealing a stage bordered by the digital boundaries, but augmented by an upstage galactic background.  The dance then begins, but as it progresses, these lines change form, becoming eerily cloudy moving galactic-like forms, and upward shooting stars within that galaxy. At one point, the lines become populated with round balls of light, which eventually fly off into the surrounding “air” like flying light tribbles (Trekkies will know what I’m referring to; for those who don’t, think fuzzy softballs). It’s a fascinating electronic space.

Into this framework Barak has choreographed dances that reflect and amplify the visual and sonic digital atmosphere: linear where that was appropriate; lyrical to match the shooting stars, swirling movement to match the cloudlike galactic swirls. The nine dancers, led by Erickson, Fadeley, Guthier, and Villarini, heavenly bodies in this universe, seemed never to stop moving.

By themselves, the choreography (which included “ordinary” movement like running mixed with ballet vocabulary and seemingly endless soaring arabesques) might not have been extraordinary, and the visual display might have been merely an interesting presentation of lines and angles and stars and light worthy of a planetarium. But together – and coupled with the unpretentious electronic score – they created an irresistible atmosphere that pulled the audience into the dance with the force of visual gravity, and then, as the visual airscape reversed course (literally) and returned the audience to its home planet, it simply ended, having provided a peek into another world. In addition to those already mentioned, Black, Gadzinski, Wilcox, and a vibrant Smith completed the exceptional cast.

This kind of theatrical dance experience has been done many times before, over many years, including with much more complex integration of dance and spatial forms and of prerecorded dance with live performance. E/Space isn’t a technical or choreographic or innovative tour de force. But it’s a delicious example of how theatrical an abstract ballet can be. It seems perfectly suited for La La Land (which is not meant to be dismissive), but for a semi-jaded New Yorker it was a very nice place to visit. And I’ll look forward to Barak Ballet’s next visit here.