Post:Ballet
Waltz of the Snowflakes
Streaming currently on YouTube 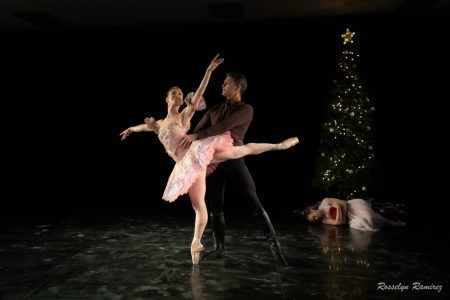 The first Nutcracker experience of any year is special. The music, the characters, the story, the snow – it signals that the holiday season is nearing. This year is understandably different. In the San Francisco/Bay Area (and I imagine most places), in person, theater productions are not a possibility. So, companies are looking to other options to share the classic story ballet with audiences, like broadcasting previous performances. Diablo Ballet, under the Artistic Direction of Lauren Jonas, took a different approach. They opted to create a charming dance film, directed by Walter Yamazaki and Luke H. Sauer, of Julia Adam’s 2019 The Nutcracker Suite.

This fresh take on the festive tale is just delightful, adapting the typical full-length work into a single Act, complete with ample Bay Area flair. Viewers meet the Diablo Family and their daughter Clara, as they check into The Fairmont Hotel for a grand holiday treat. Clara and the Bellhop are instantly smitten with each other (he transforms into the Nutcracker later). And orchestrating all the story’s magical elements is the hotel manager or as the program names him, the concierge.

Because The Nutcracker Suite is a shorter adaptation of the original, not all the characters nor all the various dance episodes are present. But there are plenty of favorites to enchant: the Sugar Plum Fairy, the Cavalier, the Snow Queen, the Mouse King and of course, Clara and her Nutcracker. And the dance sequences were simply lovely. A jazzy, retro interlude (the only music used from outside the Tchaikovsky score) found the Diablo family swirling, sweeping and waltzing about the room. As partners shifted and changed, Olivia Powell as Clara and Roberto Vega-Ortiz as the Bellhop found themselves on a romantic whirlwind journey through time and space. Jackie McConnell and Raymond Tilton elegantly embodied the Sugar Plum and Cavalier, tackling the spin-packed partnering with ease and confidence. A spirited match unfurled between the Nutcracker and the Mouse King, while the Snow Queen’s choreography had a hearty dose of regality and grandeur. And the pas de deux between Clara and the Nutcracker was all about joy and freedom. Diablo Ballet’s choice to create the film was spot on. It felt like you were watching a live show and participating in that distinct performer/viewer exchange. As we have all been missing that experience this year, The Nutcracker Suite was a gift.

The only section of the work that didn’t totally track for me was the Mirliton, or French as it’s referred to in some versions. Here it was envisioned as a quartet, and the actual dancing was beautiful from all four women – it was more the concept that was somewhat confusing. For this pas de quatre, two of the dancers were costumed in pastel colors (which tends to be typical for this chapter), and the other two were in contrasting red and black. It seemed like we were seeing two Mirliton dancers and two dancers from the Spanish Chocolate divertissement. Maybe that wasn’t the intention, but that’s how it read. Not only was the latter’s music not part of the scene, the choreography also didn’t reflect any of the steps or style that is often found in the Spanish variation. So it did feel a bit curious why this section of the ballet was designed the way it was.

Diablo Ballet will be re-airing The Nutcracker Suite from December 21st-23rd, just in time for Christmas!

For many Bay Area dance fans, the yearly sojourn to the War Memorial Opera House for San Francisco Ballet’s Nutcracker is a cherished tradition. And it’s not just about the performance. Getting dressed up in festive finery, taking in the mélange of glittery ornaments in the lobby, watching the “snow” fall from the outdoor balcony. This year that tradition won’t happen. At least not in person. 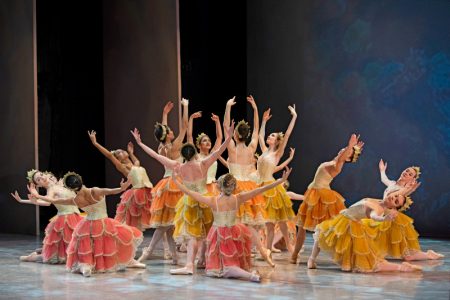 But San Francisco Ballet wasn’t about to let a December pass without the classic holiday ballet. Instead of a live theatrical format, they have created a holistic Nutcracker experience for folks to enjoy virtually through December 31st. Not only does this include a complete performance from the SFB archives, but also a plethora of Nutcracker-related activities for the whole family. It may be the first year since 1944 that SFB has been unable to stage a live Nutcracker, but they have gone to the nth degree to ensure that the two-Act narrative is still a part of 2020’s holiday season.

For me, it took a little trouble-shooting to get the performance going (they have a whole page on their website with helpful tech tips), but once I had adjusted a few settings on my end, the ballet’s various scenes went off without a hitch: the Stahlbaum living room, the mouse/soldier battle, Clara and the Nutcracker’s joyful pas de deux, the snow-laden forest and Act II’s Crystal Palace, which in many versions is referred to as the Land of the Sweets. The production that was chosen for this event represented SFB’s current version of Nutcracker, choreographed by Artistic Director Helgi Tomasson, though it was a little surprising that it was from back in 2007, thirteen years ago. Having said that, it was fun to see some favorite dancers who  have since retired or moved on to other opportunities, and to see some of SFB’s current principals and soloists at earlier points in their career – as students or as part of the corps de ballet.

Nutcracker is available online through the end of the year – visit https://www.sfballet.org/productions/nutcracker-online/ for more details.

It’s no secret that the part of Nutcracker I most look forward to is the Snow Scene. The choreography, the costumes, the circular Tchaikovsky score, the effects – I love all of it. So I was beyond excited to learn that the artists of Post:Ballet had recently collaborated on a new film featuring this transcendent chapter. Choreographed by Artistic Director Robert Dekkers with cinematography by Ben Tarquin of YAKfilms, Waltz of the Snowflakes highlights the power of contrast and reminds its audience that this unprecedented year is no match for the pure joy of movement.

The seven minute dance short’s visuals provide numerous points of delicious contrast. First, the setting. Dekkers and Tarquin opted to place the ethereal, dreamlike sequence amidst an industrial park space – the float-y, fluttering movement meeting a Brutalist backdrop. Such a striking match of opposites. Waltz of the Snowflakes also facilitated an unexpected meeting of the seasons. While I can’t be sure of the temperature the day the piece was filmed, the sky was crystal clear and the sun soaked every angle, creating beautiful shadows of the wintry precipitation on the cement. Contrast also played beautifully into the choreography. Contemporary ballet vocabulary was definitely a throughline, but as the music crescendoed, the movement similarly took on a new quality and intention. What began as softer, wispier motions grew with urgency until arms swung frenetically through the air and bodies turned and contracted sharply. 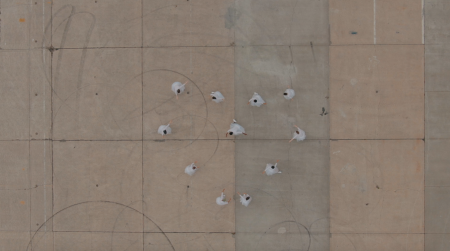 Post:Ballet in Dekkers’ Waltz of the Snowflakes
Photo Ben Tarquin

The dancers were all in from start to finish, seemingly unaffected by the non-traditional stage surface, or by the fact that their feathery tulle skirts needed to be paired with facemasks and tennis shoes. Every moment was full out and undeniably buoyant – lilting balancés, soaring attitude turns and pirouettes, huge jetés and crisp temps leveé. The stage architecture that Dekkers created for these dancers to traverse was quite something. Waltz of the Snowflakes’ aerial views revealed this gorgeous patterning, as the dancers weaved in and out like a quiet winter snowfall. And there was a very special treat when the cast came together to form a heart shape – it felt like the dance community was sending a message of love and peace to the world.

Check out Waltz of the Snowflakes (filmed adhering to all COVID-19 protocols and safety measures) at: https://www.youtube.com/watch?v=Ru5H3LHiU1M&feature=youtu.be