Artistic Director and choreographer Soonho Park, who studied contemporary dance at Hansung University and participated in a program for choreographers in the Netherlands, founded Bereishit Dance Company, based in Seoul, South Korea, in 2011.The program notes didn’t  explain the genesis of this contemporary dance company’s Hebrew name, “Bereishit,” meaning “in the beginning,” which is the first word of the Torah. The choice of name might relate to Park’s desire to begin something significant and new and to honor history and tradition while doing so. 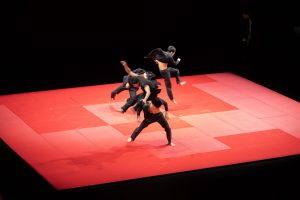 Atop bright red mats, dancers continually tussled, sometimes slowly bending into each other, leaning and sharing weight. In a striking sequence, the dancers, with knees bent and feet wide, shifted back and forth on the balls of their feet, ready to rumble, as their arms swung loosely by their sides. Loud thumping bass accompanied their moves. Dancers also slid across the mats, diving and flattening like baseball players trying to make it to home base, then amazingly popping back up. And, in one clever section, a dancer, completely covered in black suit jackets and hunched over in a squat like some kind of huge fabric bug, balanced on another dancer’s shoulders. From that height he plunged into the darkness and seemingly disappeared, and the audience gasped. The dancers subsequently used their jackets as whips, slapping the stage with boisterous thwacks. 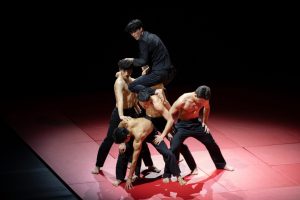 Perhaps most strikingly, at the end of Judo, pairs of dancers engaged in a jaw-dropping feat. One dancer hurdled over another, barely clearing his skull, while the dancer being jumped over dramatically fell to the ground as if knocked over by force. This breathtaking and perfectly timed stunt occurred over and over and over, finally leaving one dancer as the sole, weary target. He would gather his composure, struggle to stand upright, then fall, then stand again, until he was ultimately pummeled into the ground for good.

After an intermission, and what I imagine was a much needed rest, the company presented Balance & Imbalance, which although not about sports and violence, also featured choreography about action and reaction, conflict and harmony. The mats were removed from the stage, and two musicians and a vocalist, all wearing traditional Korean attire, were added. The musicians played drums, primarily, while the vocalist performed a kind of storytelling through song. In Balance & Imbalance, two female dancers joined four male dancers on stage. They wore pedestrian clothing, solid tops and bottoms that you might see on the street. A lot of the movement style was the same as in Judo — bodies intertwined and melded, turning and twisting, and as the title suggests, balancing and being thrown off balance. 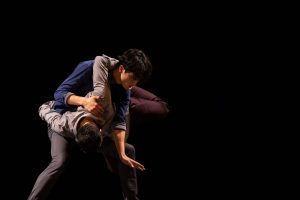 In a humorous section, the vocalist (Seohee Lee) seemingly chastised a male dancer, circling around him and expressing judgment about his body (she spoke in Korean, so I’m guessing at the content). Like a cartoon character, he puffed out his chest, rounded his arms like they were bulging and big, and attempted to look like a bodybuilder, but he simply looked silly. At one point, Lee repeatedly smacked his back like a drum, which was met with appreciative laughter from the audience.

In another section, the two female dancers stood in front of the male dancers, and the men manipulated them like puppets, tapping their shoulders and tugging their hands to make them move. Later, I particularly enjoyed a backward trot in which the dancers held out their arms in front and let them freely jiggle. Powerful dancing built to the sound of the drumbeats. The dancers’ bodies hypnotically shook like teens at a rock concert. 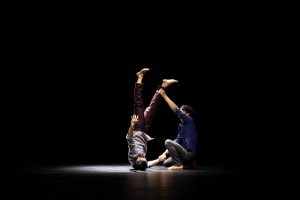 Bereishit Dance Company’s dancers are impressive as both athletes and artists, and Park’s choreography sometimes does seem to capture something new. Park’s inspirations, taken from sports and Korean tradition, afford an ideal entry point from which to begin an exploration of Korean contemporary dance.