Bill T. Jones was alone on stage, cogitating and circumambulating, at the beginning of What Problem?, which premiered at the George Mason University Center for the Arts. Yet he was well supported, with lots of resources and collaborators. What Problem? was made possible through numerous commissions, including the Center for the Arts at George Mason University, with additional support for its creation by the Mason Artist-in-Residence Program, which is funded, in part, by the George Mason University Office of Research, Innovation, and Economic Impact and ARTSFAIRFAX. Plus, Jones was subsequently joined by his company members; vocalist Holland Andrews; the Mason University Singers, conducted by Stan Engebretson; and community participants from the Northern Virginia area. Moreover, a bevy of other artists also contributed to its creation: Nick Hallet (original composition), Robert Wierzel (lighting design), Samuel Crawford (sound design), and Liz Prince (costume design). Furthermore, in addition to Jones, Janet Wong and the Company contributed choreography, and Jones and Mark Hairston contributed text. The text contains excerpts from Dr. Martin Luther King, Jr.’s I Have a Dream Speech, and Herman Melville’s Moby Dick. There are musical excerpts, too — traditional hymns performed by Empire Jubilee Quartet and prisoners of Mississippi State Penitentiary recorded by Alan Lomax. Anyway, you get the idea, although conceived and directed by Jones, there was a village behind him. 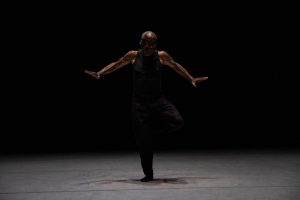 Not only did a village help to create What Problem?, a village is what the work is about. More specifically, it’s about certain pains that preceded us and are ongoing. It’s about living in a community and learning to see, listen to, and care for each other. We should all have as much support from those who surround us as Jones did in making What Problem?.

What Problem? provided a lot to chew on. Jones started off taking Dr. King’s famous I Have a Dream Speech and mixing it up, saying phrases backward. “Last at free,” said Jones, and “Ring freedom let.” Jones wore all black, his strikingly muscular arms extended from his tank-top as he paced and recited. Singers accompanied him later, and the scope grew to something operatic.

Jones described a young African-American character from Moby Dick, Pip, and Pip’s encounters with fear and floating. Jones remarked that he had forgotten about Pip after reading the novel. He accused all of us of not remembering Pip. In the novel, Pip, abandoned, bobs and sinks in the sea, but he’s subsequently rescued. This turned out to be the performance’s main message, I think — not leaving anyone behind. It’s dangerous to perceive Pip as a problem. The problem, it seems, is treating others like problems instead of like brothers and sisters. We are all in this country together, Jones observed. 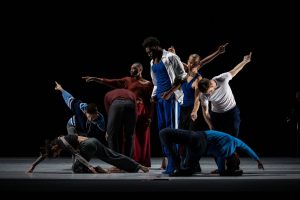 Until the end, Jones was the one doing the actual talking, but the dancing spoke volumes, too. While the ideas in What Problem? are heavy, the dancing significantly lightened the atmosphere. The Company members are superb performers. Their movement was so clear that one sensed words, even sentences and paragraphs as they danced. They curled in fetal folds, they swept past one another, they carried Jones aloft, eventually they clung to each other. The voices of the Mason University Singers along with the unbelievably talented Holland Andrews added further texture to Jones’s narration. Andrews was my favorite thing about the performance. I was irresistibly drawn to Andrews’s electrifying and bewitching voice, which sometimes distracted me from the action on stage.

Among other things, What Problem? highlighted waves and connections. Diverse performers, including members of the local community, reached out to touch each other, forming a long undulating curve. Those at the curve’s end then peeled off running, and new waves of connection formed. The performers also rocked back and forth, tightly packed together like sardines, prostrate on the ground, and rolled in a single line. They later approached standing microphones, in two groups facing each other, and shared personal truths. In these moments, waves of emotion churned through the audience. Revelations of loneliness, rejection, and molestation brought empathy. We experienced connection as these individuals spoke from the heart. 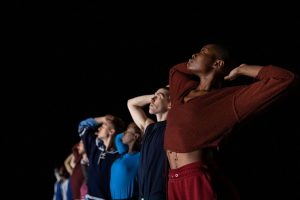 Jones went through a list of thank yous to close What Problem?. He thanked Dr. Martin Luther King, Jr. for many things, including “for believing in the future,” and he thanked Melville for not having let Pip drown. I take this opportunity to thank Jones for not letting the audience drown. What Problem? offered hope to humanity, and that’s something we all dearly need to embrace. Jones seemed to impart that we can rescue each other and prevent our most vulnerable from drowning if we try; life is less of a struggle if we support one another.