For three evenings in a row I sat and watched the Bill T. Jones/Arnie Zane Company perform distinct works that together form the Analogy Trilogy. I was skeptical given the divergent subject matter that the three works would feel like they fit under one umbrella. I remained skeptical after the first two nights. In the end, in my view, Analogy Trilogy did come across as a trilogy, and I was glad I was able to experience it that way.

The first night featured Analogy/Dora: Tramontane, based on interviews conducted around 2002 between Jones and his mother-in-law Dora Amelan about her life as a young French Jewish woman during WWII. This first section of Analogy Trilogy, which premiered in 2015, certainly tears at the heart. Amelan’s stories are sympathetic and compelling, and the parallels between the internment camps in Vichy France where she volunteered, and the detention of asylum seekers crossing the border into the United States are haunting. In both, families suffer separation. Dora’s observations about children and parents being ripped apart resonate. They are one of the reasons sharing personal narratives is so important. History tends to repeat itself, including, maybe especially, the bad stuff.

Analogy/Dora: Tramontane begins with voices. (“Tramontane,” as defined in the program notes, means “beyond the mountains,” and the term further names a powerful dry, cold wind that occurs in southern France). Microphones and a pair of empty stools sit in an isolated pool of light on an otherwise dark stage. Dancers in pedestrian clothing enter the stage and maneuver large lightweight puzzle-like pieces, designed by Bjorn Amelan, whose mother provides the work’s inspiration. Some of the pieces have a blood red side, others only white or pale gray. Things unfold slowly as nine dancers cooperate to form various shapes. They rotate, bend, kneel, peek over edges, and eventually, a structure with a window and a door appears. The movement is repetitive, not random, and it complements Dora’s words without being a mere pantomime of the actions about which she speaks. The emotions of the dancers adhere to the narrative, even if their individual gestures don’t always closely mimic the scenes described. There’s great beauty in witnessing dance that’s consonant with the dialogue and offers sincere empathy. 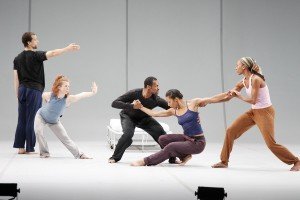 Dancers take turns taking on Dora’s voice, and this technique works well, although it’s slightly disorienting at first. A stoic sort of sadness permeates many of Dora’s tales, and the dancing tends to match this tone. There are lot of languid sweeps. The arrival of war, however, is depicted by staccato hops, jumps, and flinging arms. I exited the theater thinking that humans are sometimes incredibly fragile, and sometimes incredibly brave and strong. Also, some wreak havoc and cause pain, while others, like Dora, are a source of calm and act as a partial antidote to despair.

Another family member of Jones, his nephew Lance Briggs, is the focus of the second installment of the trilogy. In Analogy/Lance: Pretty aka the Escape Artist, from 2016, once again there’s a spotlight on an empty stage. The audience is welcomed to “The Pretty Show.” Dancers in hoodies move to text based on interviews between Jones and Briggs. I found Briggs to be a more challenging, less sympathetic personality than Dora. He struggles to deal with himself and his alter-ego “Pretty.” The two battle. Dancers strut on a catwalk, stopping to pose. There are bunch of jumps with one leg deeply bent behind, foot almost to rear.

Early on we learn that Briggs, who is African-American, was once a promising young scholarship student studying at the San Francisco Ballet School until drugs and sex work intervened. Although he was still a child then, Lance labeled himself a “predator,” explaining that he preyed on older men, even resorting to threats of blackmail, to obtain money. We also learn that Lance later loses movement in his lower limbs. In between ballet school and the rehabilitation facility, Lance squanders several opportunities to “make it” and often succumbs to harmful addictive behaviors. He comes out with a popular song, travels and works overseas, is occasionally embraced as a performer and model, but he stumbles nonetheless. Lance commits robbery, lands in jail, and continually relapses. These ups and downs are accompanied by some colorful costume and music changes. 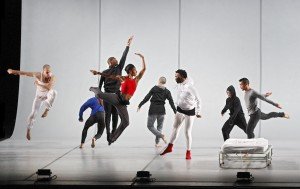 There’s definitely something lonely about Lance, about his proclamation that he’s not a loser.  The dancers capture the highs of his high times, playfully gyrating, and also his lows, lying and writhing on the floor. As in Dora, dancers at times sharply lean as if carrying a heavy burden. The love and pain are palpable. Jones encourages his nephew to tell his story to a larger audience, to write it down, but Jones is the one who gets around to tackling the storytelling, and he’s very masterful at it.

The final night brought the conclusion, Analogy/Ambros: The Emigrant, based on “Ambros Adelwarth,” who is not a relative of Jones, but a character in the The Emigrants by W.G. Sebald. I couldn’t conceive in advance how this third section could possibly relate to the first two, but it’s the glue that binds them. Right away, I saw familiar objects on the stage — a puzzle-piece from Dora and a projection of a rotating rectangle from Lance. Soon thereafter I also recognized familiar choreography. In fact, much of the choreography appeared to have been recycled from the first two parts of the trilogy. While this third installment isn’t told via interviews with Jones, it similarly depicts personal history through the significant life events of someone else, as discovered by someone else (in this case Sebald) investigating relatives.

The story of Amrbos has to do with the narrator’s great uncle who emigrated to the United States from Germany, his service to a wealthy family, a possible homosexual relationship, and confinement in a mental institution, including electro-convulsive therapy (ECT). Some of the dancers are interviewed on film talking about their reactions to the material. Subsequently, with regard to the dancing itself, there are flashes of light, and the dancers freeze. This happens over and over and over, perhaps representing ECT and/or the fragmented nature of memory generally. 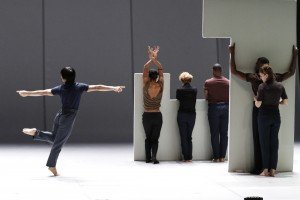 One thing that’s markedly different in the final Ambros section is the projection/video design by Associate Artistic Director Janet Wong. In the first two pieces, the projections and videos don’t overwhelm and are kept quite simple, but here they play a much greater role, and dancers even interact with them. However, the simplicity of the costumes by Liz Prince and the brilliance and effectiveness of the score by Nick Hallet is relatively constant throughout.  Plus baritone Matthew Gamble and pianist Emily Manzo, performing live, were always superb.

I know Analogy Trilogy has a lot of deep, philosophical things to say about the human journey and the desire to unearth and revitalize memories, but in this final section, I got lost. I thought I was keeping up intellectually, and then the threads I thought I’d figured out unraveled. That’s not to say that Jones or the dancers have failed, just that I ultimately felt a little bit left behind, and that’s ok. My inability to grasp the entire big picture doesn’t mean it wasn’t conveyed well, although I could sense that some others similarly felt befuddled, frustrated and/or a little bored. One man stuck his feet out into the aisle and reclined far back in his seat as if to take a nap, one woman played on her cell phone, several others fidgeted in their seats, and one woman left the theater and didn’t return. Yet Analogy Trilogy absolutely deserves to be seen and pondered.