It’s always good to see BRB return to their original home at Sadler’s. Four months ago, they brought Carlos Acosta’s dynamic and entertaining production of Don Quixote and now a triple bill of varied dance works performed to contrasted scores. 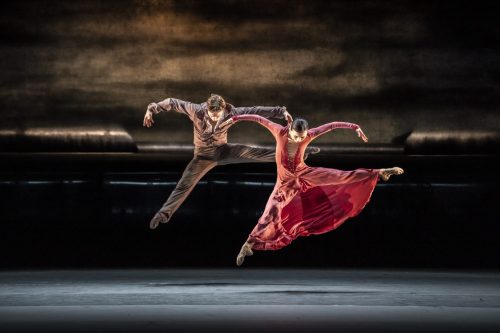 Jiri Kylian’s Forgotten Land was created for Stuttgart Ballet in 1981. It is an example of Wagner’s concept of Gesamtkunstwerk or total theatre, uniting choreography, art and music of the highest order. The setting derives from Edward Munch’s painting, The Dance of Life and as the ballet opens, we see an impressionistic seascape backdrop and a series of figures walking towards the shore. In particular three women in black, red and white, as in the painting. The sombre style of Munch’s work is amplified by Britten’s Sinfonia da Requiem in three parts: the agonising Lacrymosa, the turbulent Dies Irie, Dance of Death, and finally, the deeply melancholy Requiem Aeternam.

The figures erupt into dance with wide, swinging arms, jumps and spins. In the first pas de deux, Momoko Hirata and César Morales were superb as the anguished Black Couple, twisting closely together to express the hardships that life presents. Miki Mizutani and Mathias Dingman as the Red Couple speed round the stage, often in unison, as the Dies Irie heralds forthcoming disaster. Eilis Small and Callum Findlay-White as the White Couple wring the emotions from the slow final movement. Combined with interludes with all twelve dancers, Forgotten Land is a memorable work and it is fascinating to wonder what Munch would have thought of this dance expression of one of his masterworks. 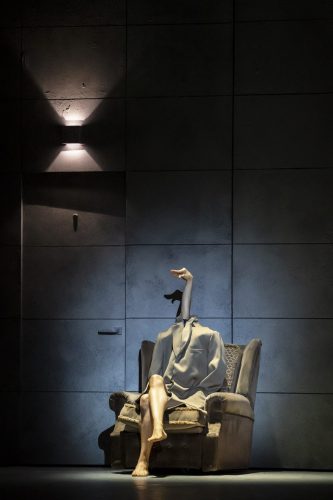 Opinions have varied about Morgann Runacre-Temple’s Hotel, but I had a smile on my face throughout. It’s an ambitious work, employing state of the art live filming developed by Jess and Morgs Films, with the dancers holding cameras in several scenes. We see a stripped down hotel lobby with staff, and guests arriving at regular intervals. Shown to their rooms, we then see the interiors and their movements projected onto the walls of the lobby. With staccato, quirky movement to Mikael Karlsson’s score, I enjoyed the interactions of staff and guests around the hotel and the dining room.

But even from the start there is a sinister atmosphere with the Manager, Tzu-Chao Chou, and the
Assistant Manager, Beatrice Parma, exchanging brief, knowing looks. As the guests bed down for the night a nightmare figure stalks the hotel, an arm projecting from the top of a long coat, creating an extended neck and tiny head, surveying the victims in their rooms. As a life-long science fiction fan, I enjoyed this unexpected element, as the guests are transformed into replicas of the arm figure. So Hotel follows the example of the Bates Hotel in Hitchcock’s Psycho, as unlikely to get even one star on Trip Advisor. I look forward to seeing Hotel again, to dig deeper into its intricacies.

To close the programme, Artistic Director, Carlos Acosta, chose Uwe Scholz’s sumptuous The Seventh Symphony to Beethoven’s eponymous music. It is a remarkably rich neoclassical work, with Scholz’s imaginative patterns never failing to impress. Intriguingly, as in Forgotten Land, the dancers face away from the audience initially before exploding into action. The music is full of confidence and power, beautifully highlighted by Scholz’s choreography. Arabesques abound and the ballerinas are carried horizontally in exultation across the stage. Repeated entrances and exits with segmented large groups create a continuous atmosphere of excitement. Momoko Hirata and César Morales excel in Schulz’s rapid duets. 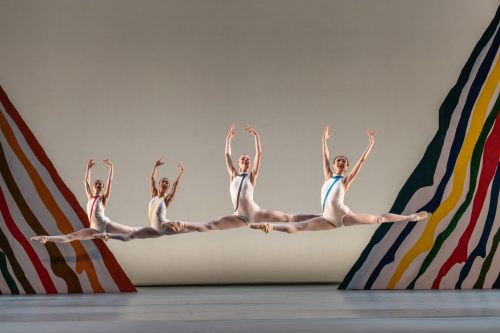 The second movement opens with lighting creating a series of rectangles on the stage and six couples with one to the fore, Yijing Zhang and Tyrone Singleton, who begin to move on the spot to the slow Allegretto. Their pinpoint accuracy holds our attention as they move away from the others, exemplifying the melancholy nature of the music. The other couples repeat the initial on-the-spot moves of Zhang and Singleton. Soon the couples are around the stage, following the lead couple’s example. Later the five other couples are back in the rectangles, repeating the initial movement. As the choreography develops, Scholz has the ballerinas moving dramatically backwards in pas de bourees across the stage, one after another. Zhang and Singleton return with powerful grands jetees as the music climaxes. As calmer sounds return, we again see the first pattern on the rectangles, eventually the dancers separate slowly, dividing to the two sides of the stage.

The third movement features two eye-catching moments in the slow sections with two handed lifts holding a horizontal dancer way up in the clouds. Later all the dancers gather stationary for a minute or so around a circular pool of light. A moment of calm between rapid jumps and spins from the men. The fourth movement speeds along with Céline Gittens and Brandon Lawrence as accomplished as ever in their duets, in between large scale ensemble sections.

I appreciated Scholz’s own paired down white costumes with a diagonal black band. What a loss for the dance world that Uwe Scholz died at 46. His repertoire is rarely performed in the UK and the originality and expressive quality of Seventh Symphony underlines that we should see more of his ballets.

Into the Music is an outstanding programme and shows Carlos Acosta on top of his game in shaping the future of Birmingham Royal Ballet.