Birmingham Royal Ballet is celebrating Shakespeare 400 with a triple bill of contrasted ballets as well as an evening length version of The Tempest. Given that narrative is an important strand in dance, it’s inevitable that the Bard should play a significant role in the dance repertory of the past century. However, despite the excellence of the original texts, it is of course no guarantee of success for dance interpretations. In the recent past we have seen Christopher Wheeldon’s acclaimed “The Winter’s Tale” contrasted with Anna Terese de Keersmaeker’s disappointing “Golden Hours” based on “As You Like it”. So, it was pleasing that BRB’s Shakespeare triple bill forms one of the most satisfying programmes I have seen from the company in recent years. 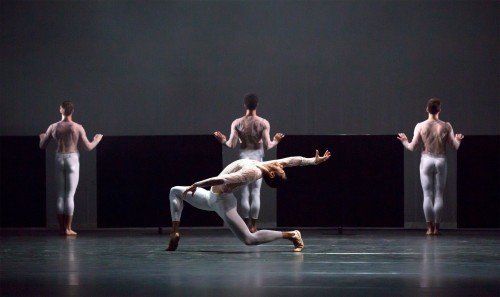 Wink by Jessica Lang, premièred this year, is an elegant, neoclassical reflection on the sonnets. The innovative set by Mimi Lien has some dozen swivelling rectangles black on one side and white on the other. They frame the stage with one line at the back and another set at 90° on the side. The rectangles shifting from white to black echo the work’s title, which comes from Sonnet 43, “When most I wink, then do mine eyes best see.” The five poems are read as introductions to the various sections of this 30 minute ballet. César Morales dances solo to the readings and his strong technique and expressive qualities finely interpret the contrasting moods. Lang makes repeated use of quartets: romantic couples initially, then for the angry Sonnet 64, four men in unison with clenched fists held high. The dancers relished Lang’s choreography and I was particularly impressed by Céline Gittings’ dynamism and finesse. Jakub Ciupinski’s commissioned score reflects the rhythms of the poems and his tuneful, minimalist music provides an excellent accompaniment. 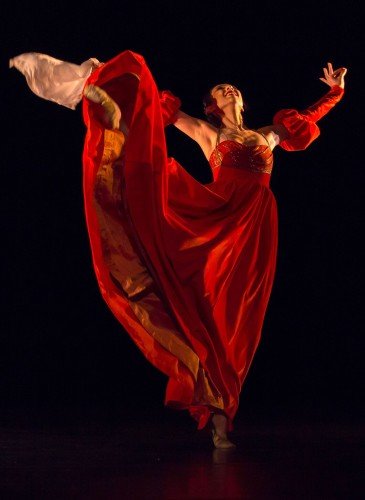 With The Moor’s Pavane by José Limón we return to narrative and one of the most successful examples of Shakespeare in dance. Limón recounts Othello in 23 minutes with only the four main characters, who remain on stage throughout, in a sharply focussed distillation of the tragedy. Using court dance, contemporary dance, including deep back bends, Limón’s work nevertheless fits easily into a ballet aesthetic with its period costumes and stately pace to beautiful, melancholy music by Henry Purcell.

Bringing the characters to life is essential for Pavane and the BRB dancers excelled. Yijing Zhan plays His Friend’s Wife, Emilia in the play, and brings out her playful, mischievous nature, prepared to carry out her husband’s devious plans, but horrified at the outcome. Brendan Lawrence is The Moor, haughty and easily thrown off balance by the innuendoes against his wife. Lawrence is convincing as his character’s anger grows and then wretched and deflated at the end. Jenna Roberts is sweet and naïve as The Moor’s Wife, Desdemona. Iain Mackay as His Friend, Iago, makes the deepest impression: courtly and submissive to his master at the start, then revealing his jealous, conniving and seductive nature, making the most of Limón’s steps, sometimes wrapping a leg around Othello to convey confidential plotting as the conspiracy unfolds. The pacing and the choreography, defining the characters so well, make for a remarkable art work. Created in 1949, this masterpiece remains as fresh as ever and deserves to be staged more often.

Closing the programme, The Shakespeare Suite is David Bintley’s light-hearted tribute set to music by Duke Ellington and Billy Strayhorn and played with pizzazz by Colin Towns’ Mask Orchestra; hearing conductor Paul Murphy’s “one, two, three, four”, called out rapidly before the numbers, made a ballet first for me. Nevertheless, Suite is a mixed blessing: with seven plays in 39 minutes, we inevitably catch only glimpses of the depth and subtlety of the canon. The Taming of the Shrew provides diminutive Beatrice Parma, with a delightful cameo, wearing a frumpy long skirt and scaring the men half to death, except Petruchio of course, then leaping into the air jumping with feet splayed out to the sides…revealing trainers – great fun. Macbeth is a sinister duet for the tragically ambitious couple. Samara Downs is suitably scary and commanding as Lady Macbeth – an interesting lady, but I wouldn’t want to marry her.

A Midsummer Night’s Dream features a ditzy, drunken party couple and though the joke wears thin, James Barton’s gestures continue to amuse. Romeo & Juliet as teenage romance and separation is sweet, but slight; Othello is under powered after the mastery of Limón; Hamlet, split irritatingly between the start and end of the ballet, is unconvincing, despite a bravura performance from First Artist, Lewis Turner. However, the choreographed curtain call, with the different characters and plays mingling, ends the work on a high spot.