Black Grace traveled a long way to get to the Washington, D.C. suburbs. This contemporary dance company hails from New Zealand. Black Grace was founded by choreographer and artistic director Neil Ieremia in 1995, and at the time was composed of ten male dancers of Pacific, Maori, and New Zealand heritage. Now only half of Black Grace’s dancers are male, and one, Otis Herring, is from the United States (he earned a B.F.A. from Howard University in Washington, D.C.). The majority of the dancers, however, continue to reflect the backgrounds of the original company. Indeed, Pacific cultures inform much of the choreography.

The first pieces on the program were relatively brief. Minoi, which premiered in 1999, is a stunning work of beauty that I imagine is a signature work for Black Grace. Five bare-chested males, wearing skirts with long slits up the side, stand in a pyramid formation, with one dancer at the front, the others staggered behind. They begin the work by opening their mouths. Their voices, chanting and singing, are strong, pure, and lovely. According to the program notes, the singing and vocalizations are based on an old Samoan nursery rhyme, and for some reason, I could hear echoes of gospel songs. The dancing, which eventually follows, starts slowly. The men are as sharp as warriors. In unison they snap and slap their bodies. The program explains that Minoi “fuses a traditional Samoan dance style known as Fa’ataupati (slap dance) and western contemporary dance.” The percussive use of the body as an instrument brought to mind stepping, which has African origins. This use of the body as a drum, as a means to communicate and unify, is obviously not unique to Africa. Black Grace’s dancers in their military-like precision are simply mesmerizing, and they honor their traditions in impressive fashion. 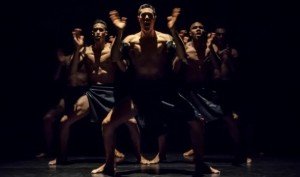 In the second work, Pati Pati, five female dancers initially took the stage. As in Minoi, the dancers begin in a pyramid formation, but in this case seated on the floor, cross-legged. Bathed in reddish golden light, they slap the floor and their own thighs in rhythm. The rhythms lead to canons of movement. Male dancers later join. The dancers alternate between poses as they slap, clap, stomp, and bounce, imparting a feeling of worship and togetherness.

The audience got a peek next at an excerpt from Crying Men, a powerful new work about male identity. The male dancers, to me, appeared to be part of one whole, struggling with different facets of being a man. One man engages in a breathtaking solo. His limbs repeat gestures smoothly, without pause, in rapid succession. He strokes his face, examines his muscles, grips at his chest. A pair of men, in a dark back corner of the stage, are wrapped into each other. One man, in a suit jacket, holds the other, wearing white, outstretched over his knees. The man in the jacket bends over the other man protectively, then gradually lowers him to the floor. The man on the floor rolls, writhes, and ultimately rests in a fetal position. The lighting design by Bonnie Burrill creates prison stripes across his shrunken shape. 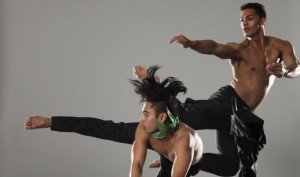 The final work before intermission, Mother Mother, a tribute Ieremia’s mother, was originally choreographed for a music video by a popular New Zealand band.  With the same striking precision required of marching bands, the dancers move somewhat haltingly, like jointed dolls. The dancing is athletic, almost jazzy with hip-hop notes. The dancers leap and turn with amazing abandon that’s exciting to watch.

After intermission was an abridged version of As Night Falls, a work from 2016. Most of the music accompanying this piece is by Vivaldi, and Vivaldi’s intricate and lively music suits Ieremia’s choreographic style surprisingly well. On a bare stage, shorn of curtained wings, the dancers, in simple pale costumes with tops that balloon with air, toss themselves around, and thrillingly toss each other, to the point of exhaustion. Ieremia’s dynamic choreography covers the entire stage. Most intriguingly to me, the dancers fall to the ground softly, then roll up from the ground to standing, taking a somersault in a new direction (reverse!). I also enjoyed a “walk” the dancers do in which, hunched over to the floor, with their fingers dragging, they move ahead. I consider the ability to successfully transform an awkward position like that into something graceful the mark of a good choreographer. Another sign of a good choreographer is knowing how to incorporate silence and stillness. Ieremia does this adeptly. The dancers flock toward a bright light, back away from it in fear, then approach again, with their arms raised in front of them, begging for more. At one point, the dancers stand in a line, arm in arm like a chain-link fence, staring at the audience, their chests heaving.

There is deep emotion in Black Grace’s repertoire that is worth seeing, if the company happens to visit your neck of the woods.