The slogan worked as an advertising pitch for candy a generation or so ago; based on the program it brings to the Joyce Theater this week, it works as an apt description for BODYTRAFFIC too.

A Los Angeles-based company founded in 2007 by a pair of New York expatriates (co-Artistic Directors Lillian Rose Barbeito and Tina Finkelman Berkett), BODYTRAFFIC returned to the Joyce on Wednesday night for a week-long engagement with an eclectic program of three pieces by three different guest choreographers. None are bad, none are great, but all are varying degrees of good, or interesting, or different, or all of the above, and all show a company with an enviable willingness to take risks. Private Games: Chapter One, a world premiere by Brussels-based choreographer Anton Lachky, is primarily nutty, in a weird but not unlikeable sort of way. 3 Preludes is a set of well-crafted romantic dances by Richard Siegal that is anything but nutty. And Death Defying Dances is a bit of both. Because it’s the most memorable piece on the program, I’ll consider it first.

The third piece created by Arthur Pita that I’ve seen in a relatively short period of time (The Ballad of Mack and Ginny and Run Mary Run being the others), Death Defying Dances is uneven, but also like the other pieces, is remarkably exciting to watch, and adds gloss to my previously-expressed opinion that Pita is one of the most theatrical and inventive of choreographers.

At times Pita’s theatricality and inventiveness take the form of shock and sexual explicitness that some might find offensive. But to me, and in contrast to certain misguided ballets that I’ve reviewed in recent years, it’s neither gratuitous nor opportunistic, nor is it particularly prurient. Rather, the references enhance the story that Pita is telling – whether the story is fiction, fact, or fiction based on fact – in a way that makes thematic sense. Though shocking and almost anger-provoking at times, and undeniably uncomfortable to watch, these images are consistent with the characters and the musical accompaniment that he’s chosen. So in The Ballad of Mack and Ginny, the brief period of partial nudity (not flaunted before the audience) is something that Ginny might have done under the circumstances in The Threepenny Opera’s time and place; and in Run Mary Run the sexual display, in context, is fair comment both on the dance’s subject (the relationship between Amy Winehouse and a companion) and on the songs by and musical style of the Shangri-Las – and particularly the vocal delivery by lead singer Mary Weiss – that Winehouse recognized and covered and that may reasonably be seen as reflecting an aspect of her life.

Compared to these other pieces, Death Defying Dances, is relatively tame. And as with those other pieces, if you’re looking for particularly inventive choreography, look elsewhere. But, rightly, Pita’s primary purpose is to amplify and illuminate songs (as in illuminating a manuscript), and by extension, to Illuminate (as in shedding light on) the personality of the singer. 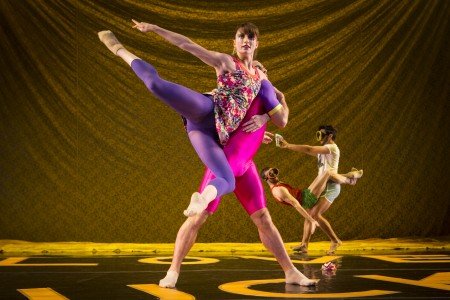 The program notes indicate that Death Defying Dances is “a tribute” to the “persona and lyrics” of Judy Henske. Known as the “Queen of the Beatniks,” Henske, who now lives in California, was a singer who performed individually or in groups primarily during the 1960s, and who attained considerable recognition (although I concede that I’d not previously known of her). Her vocal renditions sound earthy and soulful, sometimes heartbreaking, sometimes heartless: to my ear, her voice and manner of delivery (at least based on the recordings that Pita uses) is similar to Linda Ronstadt, but Henske was a chanteuse with a sharp cutting edge.

The piece is divided into segments corresponding to recordings of ten of Henske’s song renditions, most of which reflect her vocal persona of knowing, sardonic irony. Unlike Run Mary Run, all of the scenes here may be manufactured visualizations of the selected songs that have nothing to do with the reality of Henske’s life – although utilizing Henske’s physical presence via a poster of her face that stands watch over the proceedings (and which at one point is ingeniously integrated into the dance) would seem to indicate the contrary. There’s plenty of sexuality, plenty of hilarity, plenty of excess, and plenty of shock. But none of it (with one possible exception) is gratuitous. And the piece is gifted with superb execution by the six-dancer cast (I found the two women, Berkett and Lindsey Matheis, to be particularly impressive, and Matthew Rich deserves some sort of award for his hilarious gender-bending performance). Holding all of it together, aside from Henske’s voice and representative presence, is the piece’s integration of compelling staging with both the constantly changing set (which makes maximum use of minimal resources) and the panoply of visually interesting costumes (sets and costumes designed by Yann Seabra). And Pita’s utilization of many of Henske’s songs delivered “in concert,” complete with audience response, masterfully blends Henske’s concert with Pita’s dance, making the audience to the former an eerie constituent of the audience for the latter. 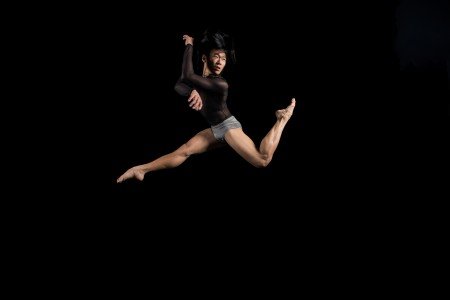 But Pita’s interpretation of one song bothered me. To Henske’s emotionally straightforward (and apparently studio) rendition of Danny Boy, Pita provides a brilliantly conceived and executed solo (danced with angst-ridden flair and fervor by Joseph Kudra) that describes a soul in torment and/or an attempt to come to terms with himself, and the scene includes Kudra receiving a passionate kiss from Guzman Rosado. The intent here is obvious (and in context, it provides a balance to an earlier equally passionate kiss planted on Berkett by Joseph Davis). But based on a brief review of the song’s history, unless Pita is aware of something that I’m not, it had nothing whatsoever to do with the song or Henske’s interpretation of it. Choreographic license is certainly permissible (and may be essential for dramatic effect), but to me this goes beyond that.

Be that as it may, as presented the segment enhances the piece’s overall impact. And like The Ballad of Mack and Ginny and Run Mary Run, Death Defying Dances is an impressive piece of dance theater. 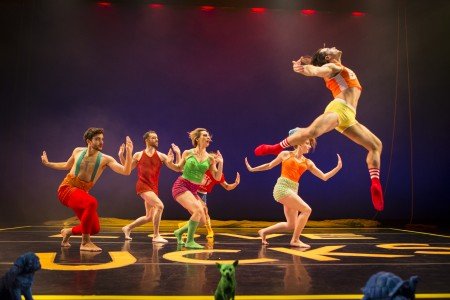 And speaking of theater, if you’re into Theater of the Absurd, you might appreciate Private Games: Chapter One. While not nearly as finely honed as a play by Ionesco, its intentional incoherence and detachment from reality, its bizarre images, its nonsense, and its underlying intelligence (it’s in there somewhere) might qualify it as a Dance of the Absurd. Even the musical background used is somewhat absurd. The dance is choreographed to an eclectic assortment of pulsing sound: a piece titled Patriotic Drums attributed to Drums of the World (I could find no reference to the piece in a Google search) and something called Biskupstrunger (that’s the way it’s spelled in the program) by Barnakor Biskupstungna – a band so obscure it may only be known in Iceland…and I suppose Brussels (the composition, and the band, each had only one tangential reference in a Google search), interspersed with excerpts from Haydn and J.S. Bach and grunts and screams from the six-dancer cast.

With the sounds of pounding drums in the darkness as a background, as the piece begins light cones from the left, right, and above illuminate a center stage trio of two standing women, Barbeito in a long gown on one side, Berkett on the other, with Rosado squatting in a yoga-like position in between and slightly in front of them. From my vantage point, Berkett appears to be grooming Barbeito’s hair.

The music suddenly shifts to classical (the Presto Finale from Haydn’s Symphony No 92 in G Major, followed by the Presto Finale from Bach’s Violin Sonata No. 1 in G Minor), during which the initial three disappear are replaced by Kudra, Rich, and Mattheis, and a reappearing Berkett and Rosado. The overall movement quality is what might be described as nouveau-Tharpian, and the visual pace is akin to a 45 rpm record being played at 78 rpm speed. The pace to this point is frenetic to be sure, but it’s coherent, fun to watch, and reasonably internally consistent – even though I couldn’t discern a point, if there was one.

But just as you start getting comfortable with the general nuttiness on stage, Private Games: Chapter One gets bizarre. Barbeito returns to the stage, still wearing her gown, and introduces herself and her “husband,” and, in more than a few sentences, expresses her hope the audience is enjoying the show. The dancing then resumes, only to be interrupted later by Rich introducing his husband, and then an indignant Barbeito returns to the stage and accuses Rich of stealing her husband – followed by more well-wishes directed to the audience.

If any of this made any sense before these stop-action interruptions, it made less sense thereafter. But although I can’t claim to know what Private Games: Chapter One is about, if it’s “about” anything, making sense isn’t it. And it is indisputable that this is intentional. Perhaps what Lachky is getting at is the absurd and senseless world in which we live, reflected in an absurd and senseless dance. One wonders what Chapter Two might look like, if there eventually is one.

Although all the dancers except Barbeito are given plenty to do, the piece’s focal points, to me, are Berkett and Rosado. Both are marvelously effervescent dancers, and Rosado handles the pervasive (and somewhat artificially injected) comedy with aplomb.

3 Preludes is the “quietest” piece on the program. To music by George Gershwin, Siegal has choreographed a set of relationships, pairs and trios, in which one woman, Berkett, is partnered by one or two of three men (Kudra, Rich, and Rosado), and in which one stage relationship is a prelude to another. The choreographic style, while not entirely lyrical, is simultaneously classic and contemporary. But the dance’s plain vanilla presentation makes it appear to lack substance despite its inventive and intriguing partnering, exquisite lifts, and overall polish, and it easily fades in the memory in comparison to the high-impact level of the dances that bracket it- which is unfortunate, because it has considerable merit. [In fairness, however, 3 Preludes was not originally scheduled to join the other two pieces on this program.]

BODYTRAFFIC is a relatively young company, with what appears to be a relatively high turnover in dancers (aside from the co-Artistic Directors, only Rosado has been with them more than two years), and it’s one of the few nowadays that apparently relies primarily on guest choreographers for its repertoire. Its future is not predictable. But it has already become a significant presence in the Los Angeles contemporary dance scene (and beyond), and its irreverence and willingness not to be bound by orthodox tenets of angst and angularity are assets which, whether you feel like seeing something nutty or not, make it a valuable addition to the dancescape.