Having seen four performances of the recent Boston Ballet production of Giselle (staged by Larissa Ponomarenko with choreography after Jean Coralli, Jules Perrot, and Marius Petipa), I found the one given on the afternoon of September 29 to be particularly moving. The cast offered an embarrassment of riches, with Ji Young Chae as Giselle and Tigran Mkrtchyan as Albrecht in addition to several outstanding dancers in supporting roles. Rather than discussing the leads first, I’ll give pride of place to some of the featured dancers who, as stars in their own right, helped bring the entire enterprise to an extraordinary height of dramatic power. 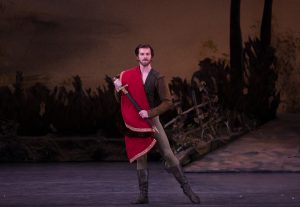 First among them was Paul Craig as Hilarion, who was not at all boyish; he played the character as a man deeply wounded by the indifference of the woman he loved. One couldn’t help but pity him in his first confrontation with Giselle when he kissed the backs of his fists in disgusted imitation of her flirtation with Albrecht, demanding to know why she was fooling around with an interloper. When she confessed her preference for Albrecht, Hilarion knew all was lost.

Later, as he sat on the bench in front of Giselle’s cottage and tossed away the bouquet of flowers he had left as a gift, one felt the depth of his suffering. Adding insult to injury, when he presented Albrecht’s sword to Giselle in an attempt to prove that her favorite was not what he seemed, she simply turned to the man she loved and believed his reassurances rather than the evidence of her own eyes.

Hilarion’s most touching moment in Act 1 occurred during the mad scene after Giselle ran hysterically through the crowd until he caught her in his arms. Trying to restore her reason, he shook her by the shoulders and then pointed to Berthe, Giselle’s mother, as if to say, “Go to her; she is your refuge.” This was a selfless act; he could have insisted that he was the one Giselle should turn to, but he understood that Berthe was the only person Giselle could trust without reservation. Somehow Craig managed to give extra poignancy to Hilarion’s generous gesture. 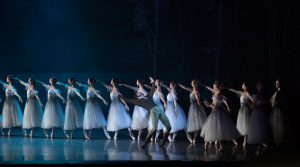 In Act 2 his panic and desperation in the face of the implacable wilis were compelling not only in themselves but also in their foreshadowing of Albrecht’s possible fate. Craig’s raw terror made one realize that Hilarion’s murder is a means of turning the screw (as Henry James might have put it) on the increasing tension of the plot.

Also stellar was Junxiong Zhao in the Act 1 peasant pas de deux, especially the second variation, when his leaps were so huge and high that he was like a creature whose true home is in the stratosphere. Better still was his joy while he was in the air, seeming to say, with Peter Pan, “Look at me … I’m flying!” In addition, Zhao was an excellent partner to Soo-Bin Lee. There were two very tricky moves when she ended a pirouette by linking her arm with his. One could see the impact on Zhao’s body as he took the force of stopping her momentum, but together they made those moments work. 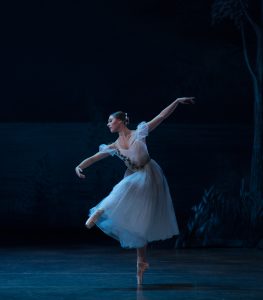 Lauren Herfindahl, as Moyna, one of the lead wilis, attracted one’s notice too. She understood the Romantic style and projected the kind of sternness it takes to ignore a dying man as he pleads for his life. One could imagine her as an effective Myrtha.

That brings us to Ji Young Chae, whom I saw as the queen of the wilis on September 28. Her laser-like focus on exacting vengeance for the wrongs done to her was chilling – as it should be. When she twice tossed a flower behind her, she did it with so much force that she might as well have been lobbing grenades. Like Katisha in The Mikado, this Myrtha was “just a little teeny weeny wee bit bloodthirsty,” and Chae made sure we got the message.

Myrtha spends a lot of time soaring above the stage, and in the height and ballon of her leaps Chae can be justifiably be compared to the reigning queen of the air, Natalia Osipova. The latter has been described as “Natalia Airlines,” and Chae has a similar kind of jet propulsion. 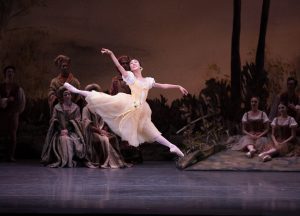 On September 29 Chae took all the energy of her Myrtha and infused it into the creation of a stunning Giselle. What I remember most, in addition to the subtlety of her characterization, was her ability to act through technique. Three bravura sequences in Act 2 were examples. The first was the series of circular hops on one foot that Giselle does when Myrtha initially commands her to dance. The precision of Chae’s position and the velocity of her spinning attested both to Giselle’s transformation into a spirit and her submission to a power greater than her own.

In the series of relevés and entrechats Giselle executes as she attempts to save Albrecht’s life, Chae looked as if she had rubber ankles. Her buoyancy was such that one could almost believe she had become weightless and could continue those fluttering elevations forever. The ensuing backward jumps, when Giselle feels the influence of the wilis drawing her toward them as she tries to escape, had the same incredible lightness of being. In fact, Chae’s grand jetés and other en l’air moves were so thrilling that the flying of a wili across the back of the stage on cables (at the beginning of Act 2) was no match for them. As Giselle, Chae went beyond competence and left even perfection behind; it was a performance for the ages. 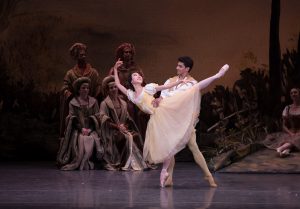 Interacting with and supporting Chae at every turn (all puns intended) was Tigran Mkrtchyan, who is new to the company, having come to Boston from Ballett Zürich. He demonstrated maturity as an actor from the first air kisses he sent toward Giselle in Act 1 to the final tableau of Act 2 when, all alone onstage, he attempted to bear the tragedy that had overtaken him. One moment that was emblematic of his approach to the role occurred when Giselle invites Albrecht to dance during the grape-harvest celebration, and he replies, “Who me? No, I couldn’t.” At that point Mkrtchyan hung back and waited until Chae pulled him forward before joining in. By not anticipating his next move, he made the interaction more believable; it was a telling detail.

On the musical side of things, the Boston Ballet Orchestra and conductor Mischa Santora were clearly determined to wring as much sublimity and pathos from Adolphe Adam’s score as possible, and they did. For instance, in Act 1 the accompaniment to the arrival of the aristocratic hunting party (complete with two live dogs) was strikingly bombastic, with blaring horns and aggressive strings. When the peasants began bringing out refreshments for the nobles, the music turned on a dime, imitating the subservient bustling of the villagers, with woodwinds taking the lead. The whole sequence embodied the clash of opposites that undergirds much of ballet and opera: lofty and humble, strong and weak, good and evil, love and death. Because the arrival of the hunting party serves as a prelude to the mad scene in which love and death intertwine, it all made sense, and the intensity of the music as performed by the Boston Ballet Orchestra drove those contrasts home.