As the song says, “What’s it all about, Alfie?” That might well be the question one asks concerning Artifact, the evening-length work in four parts by William Forsythe that Boston Ballet billed as an “athletic, avant-garde spectacle.” Forsythe himself has said this work has to do with the history of dance, and is a “ballet about ballet.” Interestingly enough, it includes quite a bit of spoken-word performance by two characters: the Man with Megaphone (guest artist Nicholas Champion) and the Woman in Historical Dress (Dana Caspersen, Forsythe’s wife) who often repeat, invert, or reinterpret each other’s lines. As far as I could tell it was the latter who was in charge, and once she appears, sets the tone for the movement explorations to follow.

Before she comes onstage, however, we are introduced to the Woman in Gray or, as Forsythe has called her, “the Mud Woman,” who is, presumably, the spirit of primordial dance. She was not merely dressed in gray leotard and tights; her entire body was spray painted gray (except for the visible bottoms of her feet). She looked as if she was made out of mud or perhaps soot, a word that comes up repeatedly in the text, which was written by Forsythe. When the performance begins, the lights in the theatre do not go down; the Mud Woman just appears in front of the curtain and walks slowly and sinuously across the stage. 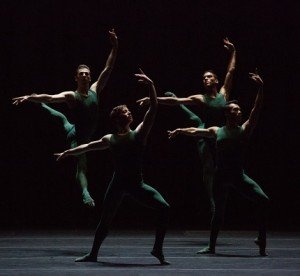 As she moves, the music we initially hear is Misty by Erroll Garner and Johnny Burke, the first words of which are “Look at me.” Then The Way You Look Tonight by Jerome Kern and Dorothy Fields is heard — a song about seeing and remembering. Turns out that vision and memory are major themes of Artifact, as the Man with Megaphone and Woman in Historical Dress make clear. The lines these characters speak involve a series of subjects, such as the senses – seeing, listening, hearing; emotional and intellectual qualities – remembering, forgetting, thinking, knowing, speaking; spatial and physical qualities – inside, outside, sharp, dull, light, dark; and earthy elements — sand, soot, rocks, dust, and dirt.

Soon the company appears in a sort of half-light and goes through a series of group arm and leg exercises that remind one of ballet class (as in Harald Lander’s Études). Later there’s a man’s solo, which was danced by Paulo Arrais, who did some beautiful jumps and turns that emphasized height and speed. It may be that this section was meant to invoke Petipa, but I didn’t feel that 19th-century choreographer’s spirit much. 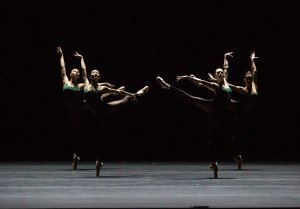 Other sections of Part I included group dances, one of which was clearly an homage to Balanchine, but the emotional center of the production were the two, sometimes simultaneous, pas de deux of Part II. The first was danced by Dusty Button and Lasha Khozashvili. Button is completely comfortable with strenuous acrobatic positions featuring spikey arms and legs. A contemporary dancer at heart, she was right at home in this choreography, and Khozashvili matched her strength and stamina.

In the second couple Ashley Ellis brought a classical sensibility to bear on the proceedings. She found patterns in the choreography, showing how certain movements related to what came before and revealing an underlying structure. Also, there were fleeting glimpses of her classical port de bras, which countered some of the spikiness on display, and she often found ways to imbue her positions with emotion.

At the end of one section she was being flipped in her partner’s arms as they moved offstage, and the speed and intensity of her movement reminded me of moments in The Sleeping Beauty wedding pas de deux when Aurora, on pointe and supported by Prince Desire, collapses to one side and then recovers. The latter clearly symbolizes the ecstasy of Aurora’s love; the former became ecstatic because Ellis made it so by adding a spiritual dimension to Forsythe’s severe geometry. One might even say that Ellis is an artifact because in her we see bred-in-the-bone classicism layered onto contemporary vocabulary.

Her partner was Sabi Varga, and he is a similar kind of dancer in that he consistently seeks to communicate feeling. In his demeanor and physicality he reinforced that impulse in Ellis and made it more visible.

One problem with the pas de deux was the lighting. The stage was so dimly lit it was almost impossible to see the dancers’ faces, and this did not do justice to their performances. Also, the couples’ dances were broken into short sections, each one of which ended with a flat, black curtain that clanged down, invoking the slamming of a jail-house door. Since one of the many themes of Artifact is the contrast between inside and outside, one was left to wonder whether the curtain was supposed to wall off the dancers or the audience.

What followed was a newly written Part III, which focused on rhythm. The Woman in Historical Dress and the Man with Megaphone were seated, facing each other at center stage, with the company flanking them (men on one side and women on the other). Forsythe has explained that Caspersen speaks the rhythm of the Bach Chaconne from Partita No. 2 in D-Minor, which was used in Part II, while the company, by making various noises, performs the rhythms of Parts I and IV. To this uninitiated listener it all sounded like hip-hop, with Caspersen channeling Lin-Manuel Miranda in Hamilton (“I am not throwing away – my – shot”) and the company functioning as a beat box.

Caspersen’s vocal performance was a tour de force, but when the artists of Boston Ballet simply stood around in bright light and kept rhythm, they looked awkward and juvenile. So while the vocal aspect of the performance hit a high point, the visuals were almost embarrassing.

Part IV featured intricate and interesting group dances. Eventually the soundscape deteriorated into near chaos until the Woman in Historical Dress resolved the turmoil, declaring that we now know how “they” (the dancers?) thought, listened, saw, forgot, and remembered. For the audience, it was certainly a journey, which began with a command: “Look at me” and perhaps ended with an injunction not to forget. Clearly, through Artifact we are supposed to have been schooled in how to look at dance and remember what we saw.