On September 6 the new Boston Ballet season opened with “Genius at Play,” a three-part program that paid tribute to choreographer Jerome Robbins.  More about that below, but before turning to current events, a retrospective is in order.  Because of scheduling conflicts, last season I did not review several performances by men of the company that rocked my world, not just because of the dancers’ technical virtuosity but because of their maturity as actors.

This is in contrast to a fairly common phenomenon in the ballet world — male dancers who have a tendency to go off-duty while onstage when the spotlight is on their partners.  Some of these performers, as they wait for their next cue, might as well be checking their phone for messages or reviewing their grocery list.  Such mental absence, although it may not have much of an effect on the ballerina, can create a perception in the audience that half the performance is missing in action. 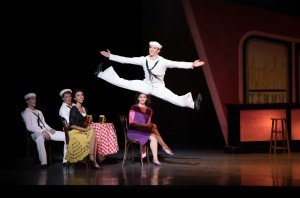 Last season three Boston Ballet men (and two of their partners) did the exact opposite by bringing a profound commitment to roles they undertook.  The following is a belated recognition of these dancers for having created and sustained characters who taught me something about what it means to be an artist — and a human being.

In a Dance magazine article that chronicled his year-long recovery from a tendon injury (https://www.dancemagazine.com/the-rebirth-of-david-hallberg-2414204804.html), David Hallberg recalled that after his first post-injury performance, he “stopped in the wings and looked back at the empty stage” then clasped his hands, closed his eyes, and bowed.  “It was a gut reaction,” he said; “I don’t pray.  But I was so grateful to the stage for allowing me to be on it again.”  One feels a similar gratitude in the face of performances of the highest caliber.

Acknowledgement goes first to Junxiong Zhao as the title character in Romeo and Juliet (Cranko version), whom I saw on March 31.  Frankly, I did not have great expectations.  Zhao always had gorgeous technique — those beautiful pointed feet, high elevations, and soft landings — but the last time I had seen him in a principal role, as Conrad in Le Corsaire, he seemed so shy that he had difficulty even looking at his ballerina. 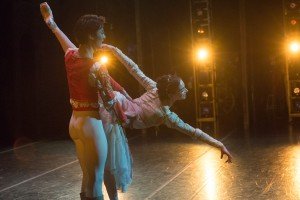 Imagine my surprise when he presented a Romeo who was not only fully present every second he was onstage, but who filled the role with such extreme and heartbreaking emotion that I walked out of the theatre not quite steady on my pins.  What I remember most vividly were the moments after Mercutio’s death when Zhao took up a sword and started slashing it around.  I don’t think I’ve ever witnessed such a powerful combination of grief and fury.  He was almost crying but also seething with desire for revenge.  I was stunned by the complexity, believability, the bedrock truth of what he was giving us – and it felt like a gift.

Other moments that stayed with me were the quiet ones, such as in the balcony pas de deux when he walked away from Juliet and stood downstage right, savoring his happiness.  He just looked out into space and somehow convinced us that he was unutterably in love. 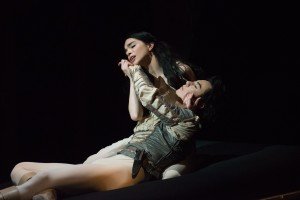 In the bedroom scene he was all agony.  As in his reaction to the death of Mercutio, he was able to show simultaneous emotions: the depth of his love, the pain of having to leave Juliet, and the necessity of his doing so.  As he evolved from romantic dreamer to star-crossed lover to tragic figure, Zhao’s Romeo was no less than thrilling.

His intensity was complemented by Nina Matiashvili as Juliet.  A moment that was emblematic of her approach to the role occurred in the balcony scene when Romeo carried her across the stage in a split lift.  Her arms were extended, and her face was so open, vulnerable, and ecstatic that as she sailed through the air, she seemed like a breath of fresh air herself.  The immediacy of her portrayal was almost startling; it was a luminous performance. 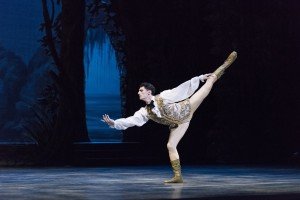 Also deserving of recognition is Lasha Khozashvili whom I saw on May 19 as Prince Désiré in The Sleeping Beauty (by Petipa with additions by Ashton) opposite Ashley Ellis as Aurora.  (See my review of Ellis in 2017 here: https://criticaldance.org/boston-ballet-sleeping-beauty/.) I’ve seen others in this role who either checked out periodically or just didn’t connect with their ballerina.  One knew that Khozashvili’s prince would be different when, in Act II, he reacted with visible shock and sorrow as Aurora, appearing to him in a vision, revealed that she was living under a spell and implored him to rescue her.  When she looked into his eyes, he gave something back, and what he gave was empathy.

At that point he reminded me of Ivan Nagy who, as Siegfried in the Act II grand pas de deux of Swan Lake, seemed to say to Natalia Makarova as Odette, “You are no longer alone. I will help you shoulder your burden.”  When Ellis went stage right, froze in position (mimicking her paralyzed state), and then became reanimated, the delight on her face foretold how she would look when she awakened – to his love. 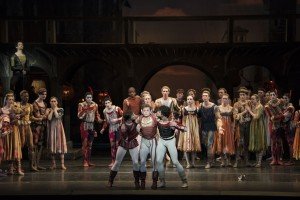 Finally, Derek Dunn, who came to Boston from Houston Ballet last year, has distinguished himself, time and again, in various repertoire.  His greatest acting achievement (I didn’t see his Prodigal Son) was Mercutio in Romeo and Juliet (March 15).  What I remember most was the little smile he gave when he put his head on Romeo’s shoulder just before he died.  That interaction with Paulo Arrais as Romeo seemed like the end of a real love affair between two friends; it was immensely touching.

His Bluebird in Sleeping Beauty (May 19) was the most exquisite I’ve ever seen live.  It reminded me of Brian Shaw in the 1963 Royal Ballet production starring Margot Fonteyn (https://www.youtube.com/watch?v=vlQcGWfmsl4).  In the brisé volés (broken-flight leaps) of his variation he seemed to achieve extraordinary height and hang-time in the air.  Then, after doing a couple of tours jetés (turning leaps) to travel upstage, he came forward with skipping steps and the most meltingly lyrical port de bras since Shaw danced the role.  At that moment Dunn looked like a sprite out of Midsummer Night’s Dream – an ethereal creature. 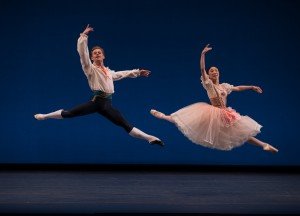 In the pas de deux from Flower Festival in Genzano (May 25) Dunn seemed as if he had been steeped in Bournonville technique from the time he was born.  He and his partner, Ji Young Chae, didn’t look so much like flesh and blood as some sort of animated fairy dust, with those fluttering feet, gracious partnering moves, and leaps out toward the audience.  It seemed like a definitive performance.  Both Dunn and Chae received well-deserved promotions this year.

In the all-Robbins program, which consisted of Interplay, Fancy Free, and Glass Pieces, several dancers also stood out. 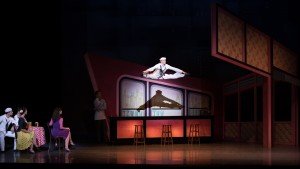 On opening night Isaac Akiba was the sailor who does the first variation in Fancy Free.  The role features a split jump from the top of the bar in the saloon where the sailors are having a few drinks.  This is Akiba’s signature move, which he has perfected over the nine years in which he has played lead Russian in The Nutcracker, ending the Trepak with eight consecutive split jumps – an invariable show stopper.

What moved me most about Akiba’s performance, however, was that his face was filled with the wonder and excitement of visiting the Big Apple.  Robbins is reported to have said that dancers have to be so familiar with their characters that they know what they (the characters) had for breakfast.  That’s how deeply Akiba inhabited his sailor.  There was a moment when he pointed out into the audience as if dazzled by something he saw in the distance, and that gesture seemed to sum up the sailor’s reaction to being, for just one day, in the great city where the Bronx is up and the Battery’s down. 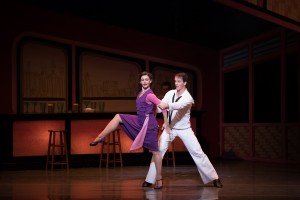 One of the sailors’ love interests, the girl in the purple dress, was Kathleen Breen Combes.  This was the first featured dancing role I’ve seen her perform since her return from maternity leave, and it was suffused with authority.  Her sculpted lines and the way she created a relationship with her partner, Paul Craig, gave tremendous authenticity to her character.  When, after kissing him, she wiped the lipstick off his face, one believed she really cared for him.

Breen Combes’s performance was also notable for the expert way she handled several athletic moves.  Credit for this also goes to Craig for his partnering skills; together they were able to make such moments look effortless.  When, toward the end of the pas de deux, Craig flipped Breen Combes in the air, it literally took my breath away. 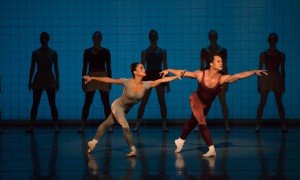 In Glass Pieces, the final work on the program, Paulo Arrais, who danced in the Facades pas de deux, delivered an especially riveting performance.  It seemed as if every muscle of his body was eloquent.  I’m not sure what story he was telling, but his moves were astonishingly precise and articulate.  At one point he did a circular port de bras (low to the ground) that immediately made me think of Le Spectre de la Rose.  Clearly, that part would be a perfect match for him, and he told me it’s one of his dream roles.  I hope he gets to do it sometime soon and that I’ll be there (as the Four Tops used to say) to see it.

On a return visit to “Genius at Play” (September 9) I had the pleasure of seeing Roddy Doble as “rhumba boy,” the role Robbins originated in Fancy Free. A consummate actor, Doble brings such minutely observed details to every character he plays (no matter how minor) that one feels privileged to be in their presence. 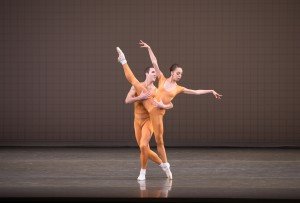 As he did the rhumba, Doble was fully aware of how adorable he was, but when he cocked an eyebrow at the girls and his fellow sailors seated at the table stage right, there wasn’t a trace of conceit in it.  He just wanted them, and the audience, to have fun with him.  That hip-swiveling rhumba epitomized the generosity of spirit one felt in his entire performance.  The dancer was subsumed in the character, and the character radiated an irresistible sweetness and good will.  When the music of his variation turned lyrical, Doble opened out into a leap that seemed to reach toward an unattainable vision that presaged Bernstein and Sondheim’s “somehow, someday, somewhere.”  It was the physical body reaching toward the spiritual, the mortal reaching toward immortality.  Robbins himself could not have done the role better.

The program began with the overture to Candide, and on September 9 it seemed especially sparkling and witty.  Kudos to the Boston Ballet Orchestra under the direction of Beatrice Jona Affron for the bubbling champagne-like homage to Bernstein.

With its variety of moods and music, this was a great season opener.  As the year progresses, I look forward to seeing new members of the company (especially principal dancer Viktorina Kapitonova, who comes to Boston from Ballett Zürich) and veteran dancers in new roles.  Next stop: The Nutcracker.