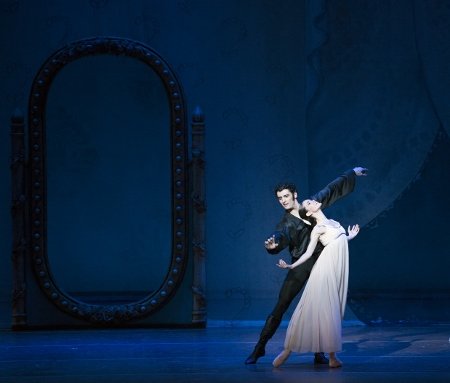 Based on the verse novel Eugene Onegin by Alexander Pushkin, John Cranko’s Onegin is one of the most beloved ballets in the repertoire. One can see why. The tumultuous drama expressed in unusual, sometimes daringly athletic, choreography tells the story of the title character, a bored aristocrat, and his encounters with a naïve, provincial young woman who becomes a glamorous society matron. It’s a tragedy of missed opportunities, ill-considered action, and unforeseen consequences.

On opening night, Lasha Khozashvili played Onegin; Petra Conti was Tatiana; Ashley Ellis, her sister Olga; and Patrick Yocum, Lensky, Olga’s fiancé. Lensky’s Act I variation was notable, in part, for the way Yocum used his hands. The repeated gesture of hand-over-heart seen in profile can look almost like a salute, but Yocum managed to soften it a bit – perhaps in recognition not just of Lensky’s obsession with his honor but also his sensitivity as a poet.

Just before the duel in Act II, Lensky has a second variation, and this one featured eloquent stretches as Yocum reached out to the moon or heaven to help him face his ordeal. His placement of a drooping hand over his head reminded me of Baryshnikov at the end of Giselle – an evocation of infinite sorrow. Yocum’s final position, a back bend on his knees, perfectly embodied Lensky’s agony in the face of death.

The Act I pas de deux for Olga and Lensky was memorable for Ellis’s amplitude of gesture. Her floating port de bras and transitions that continuously opened up in a sort of embrace of her love for Lensky were a wonder to behold. In the poem, Onegin finds Lensky’s fiancée supremely uninteresting, saying, “In Olga’s features there’s no life … /she’s round and fair of face/as is that silly moon/upon that silly sky,” but Ellis’s Olga did not conform to type. 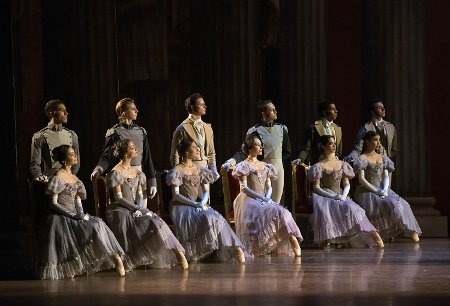 In the Act II party scene, Olga seemed to be not an empty-headed flirt, but a young woman of intelligence, courage, and independence. When Lensky remonstrated with her about dancing with Onegin, she shrugged her shoulders and even shook her finger at him to tell him to leave her alone. In the 21st century, she’d be thought of perhaps as a feminist. As an unmarried female in 19th century Russia, she makes a tragic miscalculation.

All this reminded me of how Ellis interpreted the last scene of Lady of the Camellias. Her Marguerite was completely self possessed in the face of her own demise, and that gave weight and stature to the character. Ellis’s Olga was determined to make her own choices, confident that her behavior was harmless. Unfortunately, she didn’t reckon with the jealousy and hot-headedness of her fiancé.

When Onegin yanked Olga away from Lensky at the party, the dynamic between Ellis and Khozashvili was particularly effective. This is the second time I’ve seen them as partners; the first was in The Nutcracker, when they did Snow Queen and King.  Khozashvili is a big man, and in The Nutcracker, when he lifted Ellis over his head, she seemed to fly into the highest reaches of an ideal world.

In Onegin, Khozashvili, with his dark coloring and black clothes, made a sharp contrast with the blonde Ellis in a cream-colored dress. When he went into arabesque and reached for her hand to snatch her away from Lensky, his fully extended body seemed to personify that “irresistible force” Johnny Mercer once wrote about. Their subsequent folk-dance moves looked like a harmony of opposites.

In the Act I pas de deux with Tatiana, I found Khozashvili, although technically accomplished, to be somewhat less satisfying. When he stepped through the mirror, he was a figment of Tatiana’s imagination and supposedly in love with her, but as in the first part of Act I, he looked rather remote. 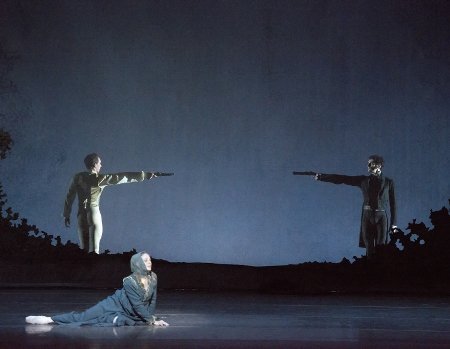 Although Conti had her moments as Tatiana, especially some whirlwind pirouettes in the Act III pas de deux, her technique was somewhat off-putting. She got into one position after another, but there was a lack of flow throughout. This probably affected her acting as well. For example, in Act III when she rested her head in the hands of her husband, Prince Gremin (touchingly played by Bo Busby), she did not fully relax into that trusting gesture; it was a little stiff.

Likewise, there was a lack of abandon in the final pas de deux, which ends with Tatiana dismissing Onegin forever. Khozashvili was as tormented a soul as one could wish for, but what should have been a struggle-to-the-death with Conti never quite came together for me. On the other hand, at the end of the ballet, when Conti was left alone onstage – fists clenched in front of her and head thrown back in anguish – the image was unforgettable.

The music, under the direction of guest conductor David Briskin, was spectacular. At some points I remember thinking that the music was actually more passionate than the dancing. There were some bassoon and clarinet solos that arrested my attention and the Act III pas de deux was, in terms of the orchestral performance, almost unbearably intense. Bravo to all concerned.

For more insight on this production, read the reviewer’s preview in the Epoch Times.