There may be snow on the ground in Boston, but come to the Opera House to see the Boston Ballet production of Romeo and Juliet, and you’ll be transported to sunny Italy, where the story of star-crossed lovers destroyed by the enmity of their families will be performed from March 15 to April 8. About to make his debut as Romeo in choreographer John Cranko’s version of the ballet is principal dancer Paulo Arrais, a native of Goiania, Brazil. Having played Mercutio in the company’s 2011 production, which familiarized him with much of the choreography as well as the intricacies of staged sword fighting, he’s more than ready to take on the lead role. At the Boston Ballet studios Arrais recently chatted about how he arrived at this high point in his career, one for which it might almost be said that the stars were aligned.

CD: What does playing Romeo mean to you?

PA: Romeo is a dream role. I’ve been waiting to do it for a really long time – and now it’s here. I’ve been waiting for Albrecht too, but Romeo comes more naturally to me. Maybe it’s a cultural thing: Brazilians and Italians are very similar; they’re loud, passionate people. I’m a little bit like Romeo in my private life too. I fall in love very fast, so I can connect to this role. 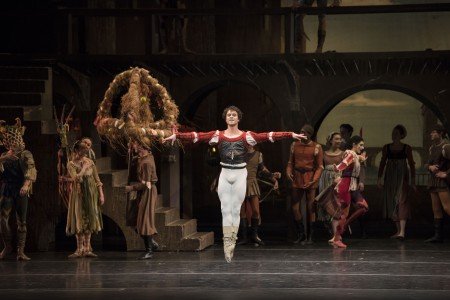 Romeo is very different from Onegin [which Arrais did in 2016]. Because he’s a Russian aristocrat, Onegin is a little bit cold. When I played him I had to extend my neck and not lift my chin up; that made me look more cold and slightly stiff. Romeo is a dreamer, so his look is more natural, and I can let go of my body language completely when I dance.

I love Romeo’s emotional journey. He connects with all the characters. In fact, interacting with Lady Capulet is one of my favorite parts of the role. It’s wonderful to be on that journey and really live it. Also, Romeo and Juliet is my all-time favorite score: the balcony scene – Prokofiev – wow! It’s such a joy.

CD: What are some of the challenges of the role?

PA: The pas de deux are very hard – with lots of lifts. During the balcony scene, I get so tired after my variation, and that’s just the beginning of the pas de deux! After that it quiets down a little bit, and I get my stamina back. By the end of the bedroom scene, which has a lot of dead lifts, my back gets really tight. But the exhaustion actually adds to the scene, especially those walks when Juliet’s arms are around my neck. 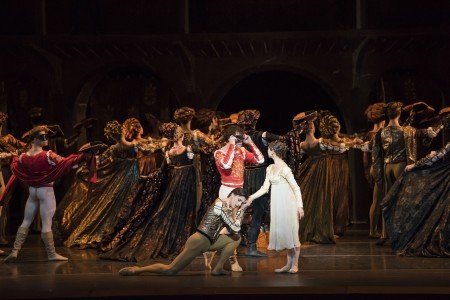 CD: How do you prepare for all those lifts?

I do a lot of Pilates. I used to do weight lifting when I was younger, but I’m thirty now, and I really have to watch the way I lift. I’ve had many little injuries: tendonitis, weakness in my shoulder, tightness in my pectorals. Pilates is like a reset button.

We have Kerri Williams here, who’s a really amazing physiotherapist and Pilates instructor. She and Heather Southwick [Boston Ballet director of physiotherapy] rehabbed me when I came back from my hip surgery in 2016. I do a warm-up to activate the little muscles that aren’t used when the big muscles take over, which can lead to injuries. The little muscles keep my body balanced. It’s so easy to turn them off and lift from my biceps and shoulders, but then I get tight, my posture gets funny; it doesn’t feel open. Working on all this is a full-time job. I do Pilates five times a week; even 15 minutes is good, but normally I like to do 45 minutes a day.

CD: You’ve played Mercutio before, tell me about his importance in the ballet.

PA: Mercutio helps set the plot in motion because he drags Romeo to the Capulets’ ball [act 1, scene 3]. Romeo touches Juliet for the first time during her variation at the ball [act 1, scene 4], and then Paris walks toward Romeo, who steps away. At that point Mercutio says “I’m going to save the day,” which he does by starting his variation and distracting all the guests. The audience often doesn’t realize it, but that allows Romeo to go to the back of the stage and whisper to the nurse, “Tell Juliet to meet me in the garden.” 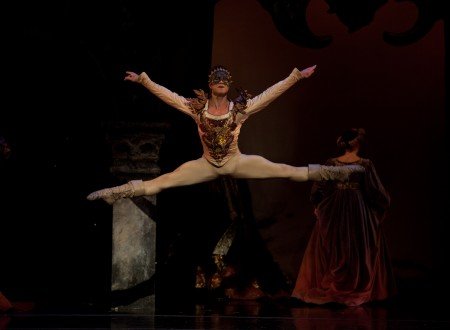 Mercutio’s variation also leads to the madrigal, which is the first partnering sequence between Romeo and Juliet. In addition, Romeo and Mercutio share some choreography. For example, they both do the trio [act 1, scene 3] and pas de six [act 2, scene 1], but Romeo has a totally different take on those dances.

Having done Mercutio helps me understand the ballet better and carry on the Cranko legacy because Romeo and Juliet is not about one character; it’s about the whole story. Cranko is theatre dance. He understood that a dancer has to be emotionally raw and honest. When Reid Anderson came to do the casting, he put the entire group together, and it had to look right because it’s not about one dancer being a star. It’s about the work. 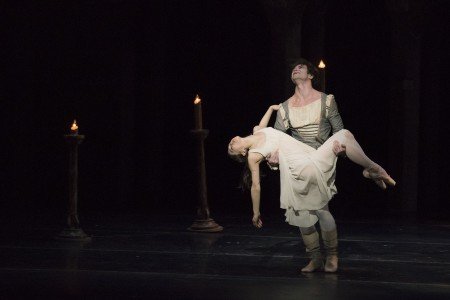 CD: What are your thoughts on partnering?

PA: There’s a lot of technique in partnering, but when I partner, I think of the ballerina — what she wants to look like and what she wants to feel. I think: how would I do the steps if there were no man behind me? Just as there are good male partners, there are good female partners. Some ballerinas are very passive. When she’s doing an arabesque and it feels off, if you give a little more pressure, and she responds, then she’s back on. If she doesn’t respond, it doesn’t work. When I work with different ballerinas, I have to change how I partner. With some I have to move faster; others are more regal, so the pace is different.

I recently did [choreographer] Patrice Bart’s Swan Lake with Polina [Semionova] in Berlin. It’s a difficult version, and we had very little rehearsal time, but it went really well, and afterward Polina said to me, “You partner like Marcelo Gomes.” It was so flattering because I know everyone likes dancing with him.

CD: Baryshnikov once said, “I fall in love a little with all my ballerinas.” Do you agree with that?

You have to, and you have to be completely invested. The ballerinas tell me all the time, “It’s so easy to dance with you because you look into my eyes and connect emotionally. You have to fall in love with them, and I think it’s beautiful to be in love. 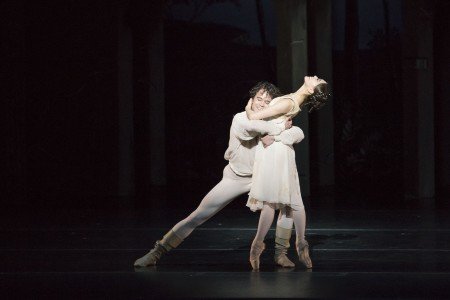 CD: As a gay man, what kind of love are you feeling?

PA: I feel attraction toward my partners, but it’s an artistic attraction. It’s real, and it’s communicative. For example, in the balcony scene, when I make a gesture that says, “Run with me over there,” she replies, “No, I have to go back.”  We hug and walk to the center of the stage; then I drop to my knees and kiss her hand.” The first time we did it in the studio, I did the kiss really softly. In a later rehearsal I took her hand and kissed it more forcefully. In that moment, I was saying, “I will be back,” and Misa [Kuranaga, who is playing Juliet] understood. She said, “You kissed me as if we were going to see each other again.” To be able to love her and communicate it only with body language is great. We’re talking and communicating without words.

CD: Tell me about the sword fighting.

PA: It’s not easy to make it believable. It has to be timed because it’s extremely musical and choreographic. Since we can’t break the swords, we can’t really let our emotions take over. We also have to learn safety skills; for example, when you throw the sword, you can’t throw it toward people, you have to throw it on the floor. 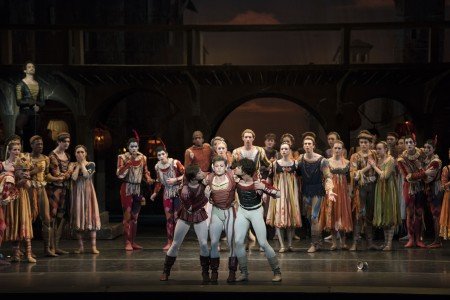 CD: Is the sword fighting different for Romeo and Mercutio?

Mercutio fights with joy because he knows he’s the best fighter; his death is an accident. Tybalt is more aggressive when fighting Mercutio; he’s irritated that Mercutio is so confident that he’s kissing the girls in the middle of the fight. This changes when Romeo begins to fight because Romeo is serious. Mercutio is dead, and Romeo is more agitated, more shaky. Tybalt thinks he can kill Romeo easily, but it doesn’t work out that way.

CD: Tell me about your training and career.

PA: I started ballet training at age 11.  At 14 years old I competed in the Youth America Grand Prix and won a scholarship to the Paris Opera Ballet School.  I graduated in two years and then spent one year at the Royal Ballet School.  After graduating from there, I went to the Norwegian National Ballet for three years, where I was introduced to contemporary ballet.

To pursue my interest in that art form I came to the States and joined Alonso King’s LINES Ballet.  That gave me my essence as an artist – my versatility and honesty. After joining Boston Ballet as a corps member in 2010, I became a soloist in 2011 and a principal in 2012. In 2013 I went back to the Norwegian National Ballet for a year to be near my mother, who was in Paris. After six months she left France to go back to Brazil, but I remained in Oslo where I made a lot of international connections, which has helped my guesting career, and I returned to Boston in 2014. 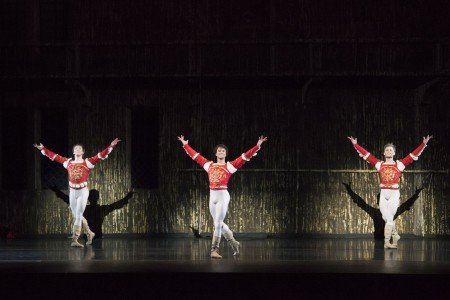 CD: Next season you’ll be premiering a piece of your choreography at Boston Ballet.  What can you tell me about it?

PA: It will be called “ELA — Rhapsody in Blue” and will be a tribute to Gershwin.  “Ela” means “she” in Portuguese, my native language. There will be a corps of 15 men, who will function like a flock of birds, and a single ballerina, inspired by my mother and aunts, who were powerful figures in my childhood. It has not been choreographed yet, but I’m excited about creating something new.

With that, Arrais went off to a rehearsal of “Bach Cello Suites,” choreographed by Jorma Elo, one of the works featured in the Boston Ballet production “Parts in Suite” that would open three days later.