Brain is a Radio: Choreography and Concept by Ashleigh Miller

Modern and contemporary dance can take a lot of forms. Ashleigh Miller’s recent Brain is a Radio show utilized a cadre of local dancers, visual art projections created by Miller, the band Floraform, a swing, and designed lighting, all witnessed and enjoyed by a full house. 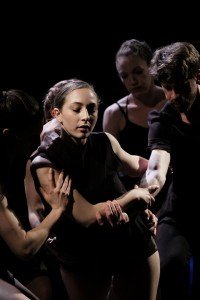 A full-length piece (about 70 minutes), it began with Miller herself in a solo, with isolated arm gestures, torso and hip rotations, and off-balance balances. This segued into other dancers assuming the stage (a studio floor actually — it’s a flexible studio/performing space). These dancers picked up on her motifs and twitched, jerked, fell to the floor, deployed shared weight techniques, and crawled over and around each other, sometimes evolving into formations and tender moments, such as when one dancer took the head of each dancer and gently laid them onto the floor in a diagonal.

A nice surprise was a swing, lowered from the rafters, whereupon one dancer leisurely arched back and forth, up and down. It was refreshing and, in its way, original. 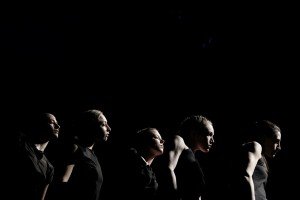 My one overall fuss of the evening was that I could not understand a single word of what Miller — also a singer for the band, sang. I’m a singer too, and fairly attuned to the aural, but sadly, Miller’s lyrics were too muffled. It probably didn’t help that about two-thirds of the way through the show, Miller, gesturing to the one of the off-stage dancers to get his attention, had him come over to her and whispered something to him. He then went over to one of the on-stage speakers and, unplugging it, left discreetly, I’m guessing to alert a technician. After the show, in her thank-you remarks, Miller told us that this speaker had evidently shorted out and caught on fire. In all, handled as best as could be, given the unusual happenstance. 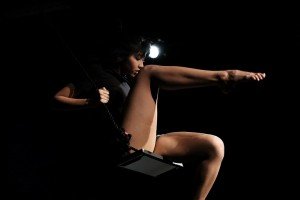 Miller — who hails from very near my own Eastside suburban town, is a Tisch School of the Arts graduate and is a talented and smart force on the creative and dance arts scene in Seattle. I found her work interesting and admire her ability and strength of character in being able to put together not just a short dance statement, but one that engaged its audience for an entire show.