It took me a long time to appreciate George Balanchine’s choreography. For years, aside from narrative and imputable-narrative masterpieces like Apollo, The Prodigal Son, and Serenade, I couldn’t figure out what he was doing, and was annoyed by his experimentation, as well as by choreography that didn’t seem to make any sense. This was in the early 1970s, when I was a dance newbie. But once it all came together in my head (I remember the program – it was the premiere of Ballo Della Regina), I saw the Balanchine pieces I had already seen, and would see thereafter, in a new light.

I thought about Balanchine, and my response to his choreography, while watching the New York premiere of Brian Brooks’s Prelude at the Joyce Theater last night (preceded by his 2015 dance, Division). I don’t know that I’d go so far as to label Brooks the contemporary (post-contemporary; post-post-contemporary … ) equivalent of Balanchine –  that’s a leap I’m not yet ready to make. But to me, Brooks has created a contemporary dance choreographic language that’s evolutionary and idiosyncratic, coherent and consistent, and that makes a visual statement. Like neo-classic ballet: but of course … not at all like neo-classic ballet. Even though I’m not sure I thoroughly “got” what Brooks was trying to communicate (with or without some imputable narrative), Prelude is a thrilling, and eye-opening, visual ride. And, as with Balanchine, at first I just sat there, scratching my head.

My prior exposure to Brooks’s choreography was in connection with two Joyce programs, both presented in partnership with former New York City Ballet principal Wendy Whelan. Her 2014 program Restless Creature included a duet with Brooks, to his choreography, titled First Fall. I didn’t like that piece at first either – until a light bulb went off. Notwithstanding the lack of any explicit emotional component, I described it, in part, as being particularly intense. Nearly three years later, Brooks and Whelan returned with an evening-length dance suite, Some of a Thousand Words (which incorporated a revised First Fall), that also took some time to get used to, but which I ultimately determined was a “must see.” Prelude uses the same choreographic language, is extraordinarily intense – and is a “must see” too. 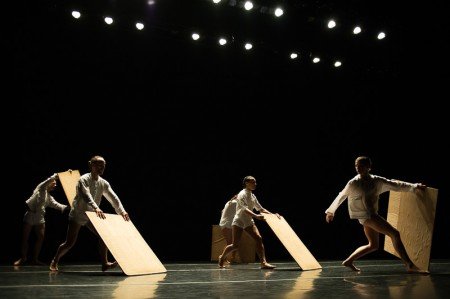 Brooks’s choreographic movement quality isn’t nihilistic or egocentric. It’s not twisting the dancers into pretzels, nor is it just an effort to entertain an audience by exhausting his dancers – although there’s no question that Brooks’s constant movement quality may lead to that. Generally, where the arms go, the torso and legs and sometimes head follow, and when the arms stop moving, everything stops moving – but in Prelude I also thought I saw movement being directed by the torso. However Brooks gets to where he’s going, the end product is characterized by a swirling, consistent dance vocabulary and phrasing; choreographed visual words and sentences which together create a narrative of sorts albeit in an abstract context: a visual event.

That having been said, Prelude applies this generalization in a way that, at least initially, looks very different from those Brooks pieces I’ve previously seen.

Prelude begins with a prelude … which itself begins with a prelude. The initial prelude is an overture of sorts played live by pianist David Friend, in conjunction with a score by Jerome Begin that the audience hears through the theater’s speakers. The house curtain is down. To my unsophisticated ear, the music Begin produces is describable as “augmented electronic”: the sound seems to be that of real instruments, regurgitated (rather than created) electronically, and augmented by the unaltered sound of maybe the same instruments. I don’t know if that’s an accurate analysis of the scores’ genesis and process, but the end result sounds a little like Philip Glass: melodically repetitive, pulsing – except somehow more 21st century.

Friend, stationed in front of and to the left of the stage in full view of the audience, and Begin (who handled what’s described as “live electronic processing”) out of view, play for what seemed like 8-10 minutes, with the sound periodically growing or diminishing in intensity like wind pulsing through a tunnel.

Then this overture/prelude stops, and the curtain rises to reveal a very dark stage with a black scrim. The music begins again, and dancers gradually emerge from the wings, first a lone male dancer, eventually followed by others … all moving backward. The pace of the backward movement varies, and the appearance of it varies as well – from lone individuals to groups forming lines and circular patterns – but always moving backwards. Between the darkly lit stage (lighting designed by Joe Levasseur), the black scrim, and the black costumes (designed by Karen Young), only the dancers’ faces and feet are illuminated. Then, gradually, the dancers begin to move differently, adding Brooks’s characteristic body movement to the backward motion, until the backward motion is largely (but not completely) overtaken by the general movement quality I’ve previously described. 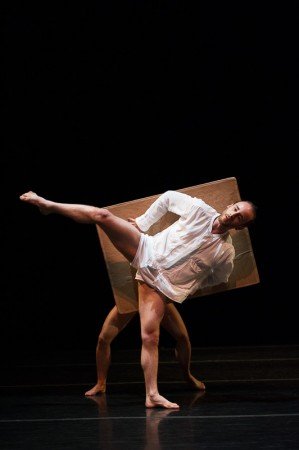 I didn’t know what to make of this as I watched it, but, in hindsight, the sensation was of being directed back in time. I consider this portion of the dance to be the prelude after the introductory musical prelude.

Then, having been taken visually from some present time to points that were a prelude to it, to me the heart of the dance began. Phrase by choreographed phrase, the “basic” swirling arm or torso-directed movement would be altered; the dancers’ positions (in relationship to each other as well as to the space around them) would be altered; and perhaps most importantly, the sequencing of the movement (the arms; the feet; head; torso) would be altered. The sense was of the dancers communicating with each other via the choreography; speaking sentences; making statements; all without any visual emotional expression. And the intensity of the conversation varied as well (as did the intensity of the music and the relative dimness of the lighting): there were agreements and disagreements; brief relationship-building and disintegration. While there were solos and paired adagio moments, the overall sense was of a story being told rather than of random movement.

Then, in a portion of the dance that took me completely by surprise, the dancers suddenly carry a rectangular white table and multiple chairs (like an unadorned, straight-lined IKEA-like dining room table and chairs) from off-stage to a position mid-stage left, and the movement intensity level is ratcheted up into what appears to be a full-blown lightning-fast battle in which the dancers not only continue moving and interacting with each other as before (only faster), but also with dancers taking positions on top of, under, and around the table and chairs, being pushed away, and just as quickly being replaced by other dancers. It was a jumble of choreographed fighting words met by choreographed fighting words – a family battle (around the symbolic dinner table) of epic proportions; a violent visual cataclysm.

Then (there are lots of “thens”), just as suddenly, the table and chairs are removed; all save one of the dancers disappear; the stage re-darkens, and a lone woman is seen moving in seeming agony – her world, to me, shattered: the image of her present having been preceded by the preludes that led to it.

As I’ve said on many occasions, I try to make sense of what I see, and perhaps I’ve just projected “sense” on a dance that’s simply consistent and coherent movement to music. And if that’s the case, that would be fine too, because regardless of whether it has an imputable narrative, Prelude makes a distinct, significant choreographic statement. With Begin’s score illuminated by Brooks’s movement, it’s somewhat like a contemporary dance visual symphony … in three movements plus preludes.

The evening’s opening piece is very different. Division is a movement concept that at first seems mindless, but which evolves into a non-stop series of interconnected sequences for six dancers and six boards (they appeared to be 2′ by 4′ by 1″ blocks of either lightweight wood or plastic). The dancers are clad in white; the boards are painted white; and the stage is brightly lit.

The cast is initially lined up vertically stage right, the boards held upright on the stage floor at their sides. The dancers then push the boards to the other side of the stage. Then back. Eventually, the piece accelerates into movement in which the boards act as moving dividers separating pairs or small groups of dancers. The boards are lifted, pushed, pulled, and otherwise directed by the swirling movement (the same choreographic language I’ve already described) – except, as the dance progresses, the impulse seems to change from the dancers to the boards themselves, with the boards’ positioning seemingly directing the dancers’ movement. 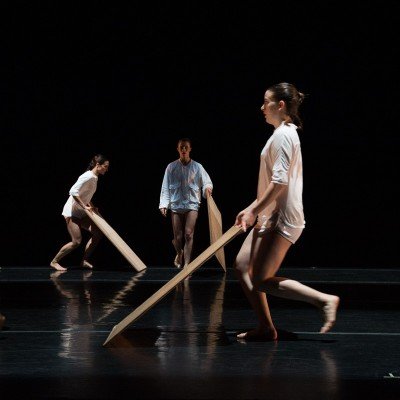 Division doesn’t have the intellectual component that may (or may not) be in Prelude, but it’s a visually fun exercise to watch (and Begin’s accompanying electronic score is very different from Prelude – much more staccato, a little screechy, but not intolerable). Rapid-fire variations on a theme.

When the evening began, I wondered whether my reaction to Brooks’s choreography would be different without Whelan’s participation. But having Whelan in the audience instead of on stage didn’t impact the result. This is highly evolved contemporary dance, reflecting and validating Brooks’s appointment as the inaugural Choreographer in Residence for Chicago’s Harris Theater (where Preludes originated and premiered), his recognition as a Guggenheim Fellow, his receipt of a Mellon Foundation Creative Artist Fellowship, and his choreography for dancers – ballet dancers as well as modern dancers. There’s a lyricism, a consistent flow, inherent in Brooks’s characteristic movement language that echoes ballet movement – even though it’s not ballet movement. It’s “seeing the music,” but in a different way. Maybe it should be labelled neo-contemporary.

And, perhaps intentionally, although neither of these dances is a Balanchine black and white ballet, Prelude and Division, together, are a Brooks black and white program of contemporary dance.