I didn’t do much in the way of advance homework prior to seeing Camille A. Brown & Dancers’ BLACK GIRL: Linguistic Play, and I couldn’t read the choreographer’s note in the program before the performance began because the lights in the theater were dim, the print was small, and my eyesight is not as good as it used to be. Thus, I watched the work on a blank slate, which, as it turned out, is a fine way to take it in. The title gives away some hints. I figured it would be about, well, Black girls, and it would have something to do with play, and that’s correct. But for me, at least, and I suspect many in the audience, it was about far more — layers of memories and female relationships extending from childhood, rich and sometimes bittersweet.

BLACK GIRL: Linguistic Play begins with a figure in a blue-green hat (Tracy Wormworth), on an elevated platform, in low light, playing an electric bass. A pianist (Scott Patterson) is also on the stage, but you hear the keys before you see him, and his face and that of the bass player remain largely obscured by darkness. To the side of the pair of musicians, after a sea of black platforms at various heights, is a large chalkboard wall, full of colorful childish scribbles. The setting might be a schoolyard, a neighborhood playground, or just city streets, home to wherever children flourish.

Also on a platform is Brown, in jeans shorts, a large pinkish colored shirt, and tennis shoes. As she moves, one immediately comprehends that she’s a girl, the kind of girl who has questions and dreams and a ton of youthful pizzaz. Above all, she’s playful. Her hips waggle, her knees go in and out, and she fans herself with her hands. She also lengthens her arms, one up, one down, and a little electric jolt shudders through her. She’s growing, cautious and curious, tentative but strong. At one point, Brown stares up and beyond — is she gazing at who she may become?

Above Brown floats a series of mirrors tilted at different angles. They seem to provide mostly light, but also occasional glimpses of movement. The mirrors lend peeks at the past, present, and future. Through them and the dancing, the idea of memories as fragments comes alive. Brown begins to tap, and the platform onto which she jumps picks up the sound of her stomps and shuffles. In a moment of surprise, as Brown leaps from one platform to another, dust clouds billow up from her feet. Kudos to lighting designer Burke Wilmore and set designer Elizabeth C. Nelson for evoking just enough atmosphere to enhance the dancing, and to the musicians and sound designer Sam Crawford for doing the same. 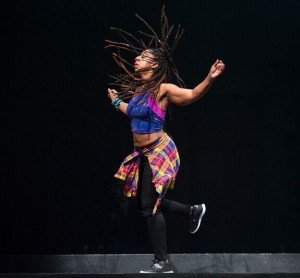 In the tap sequence, Brown engages in a percussive duet with pianist Patterson. Brown playfully primps and preens as she walks, her feet finding African rhythms from long ago. Later, she jumps rope, but there is no rope, only her feet pumping up and down and her hands spinning in tightly circumscribed circles. A second dancer, Catherine Foster, enters the stage, a plaid shirt hanging about her waist. After a series of dueling, elaborate gestures, the two girls warmly greet each other. Their dancing is accompanied, softy, by strands of childhood songs and rhymes. The narrative is amazingly clear thanks to dramaturgs Daniels Banks, Kamilah Forbes, and Talvin Wilks.

In this duet, I think I most enjoyed the Double Dutch part, where the pair, holding hands, repeatedly lifts themselves over an invisible jump rope. The dancing here is innovative and fun. Brown utterly succeeds at elevating the Double Dutch movement vocabulary into art. Elsewhere, too, Brown’s choreography beautifully melds the exuberant and spontaneous games of Black girlhood with their historic African roots. There’s a quality in the duet that perfectly captures the freedom and joy of being a Black girl, from clapping games to chants that evoke the call and response patterns arising in African cultures.

In the duet that follows, I initially perceived a slightly older set of friends, but I subsequently discovered they are probably sisters. The lights grow brighter, the dancing bigger and wider in space. Bernice Capote and Fana Fraser are undoubtedly at different stages of maturity. Embodying young women, their movement clashes. Fraser is a rubber band, she sensually stretches and snaps and owns her budding body. Capote struggles. She’s still all girl, not yet a woman. She skips while her partner masters a sexy strut. 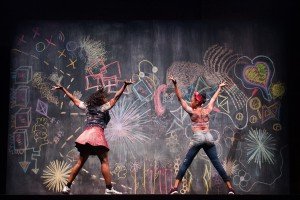 One highlight of this duet is when the dancers lean into and rub against the colorful chalk wall. Their costumes absorb the chalk, muddying them. They share a dispute over their points of view, the girl on her way to womanhood and the one left behind. Another highlight is the piercing solo by Capote that comes next. She dances her through her growing pains. Like a plant reaching for the sun, she unfurls both fragile and strong. She begins bent over, grabbing her own trembling leg, then finally, after some wild shaking, stands tall. Puberty can be lonely, menstrual cramps can be awful, and maintaining friendships can be challenging. The community of girls, however, can get you through.

I was less sure who the third pair of dancers, Brown and Chloe Davis, represents, but a close perusal of program notes for the work premiering the next evening revealed that this is a mother/daughter duet. Davis scoops up some powdered dust and lets it run through her hands like the sands of time. In their interactions, Brown comforts Davis. Brown stands behind Davis, gently gathering her hair, reassuring Davis that all will be ok. When the other dancers return to the stage, going from platform to platform like a filmstrip of memory, Davis’s character surely recalls the stages of girlhood that remain with her. This last part of BLACK GIRL is particularly tender. In the end Davis reclines upon an outstretched leg of Brown before all goes black.

Normally, when the house lights go out and come up again, the dancers take a bow that concludes the dance performance, but BLACK GIRL incorporates a dialogue with the audience. Not all audience members were willing to stay in their seats for the discussion. Interestingly, I remember only women sharing thoughts, although there were men in the audience, too, of course. I don’t generally have much patience for post-performance discussions. A lot of similar questions are always asked, and often people talk endlessly about themselves. I appreciated how Brown and her dancers and musicians turned questions back at those who asked them, especially questions about specific interpretations. There’s a reason why artists are constantly encouraging audience members to find confidence and validity in their own feelings about what they’ve witnessed. Was it Brown who reminded someone to trust what she was seeing? In any event, although I didn’t really connect with the dialogue, it seemed many audience members did, and for less-seasoned dance viewers, it’s probably a nice addition to the program.