Camille A. Brown completed a trilogy about identity with the world premiere of ink at the Kennedy Center on December 2, 2017. Following 2012’s Mr. TOL E. RAncE and 2015’s BLACK GIRL: Linguistic Play, 2017’s ink, according to the program notes, “celebrates the rituals, gestural vocabulary, and traditions that remain ingrained within the lineage of the African Diaspora and reclaims African Americans’ narratives by showcasing their authenticity.” Brown explains in the program that she was inspired by the idea of her dancers representing superheroes.  Consequently, ink has six sections devoted to different super powers: the rev up (Super Power = Heritage), Milkshake (Super Power = The Butt), Balance (Super Power = Love), Turf (Super Power: The Dab), Migration (Super Power = Spirituality), and Migration II (Super Power = The Ancestors). If that sounds a little complicated, it is, both on paper and on the stage.

I wish I could report that the six sections of ink are equally strong and that they clearly convey the messages discussed in the program. This, however, is not the case. I also wish I could report that ink is as compelling as BLACK GIRL: Linguistic Play, which I saw the night before, but this isn’t true, either. In ink, I’m afraid, Brown may have taken on too much, and the dramaturgs who helped make BLACK GIRL so easily relatable perhaps let her down. While ink has some stunningly lovely dancing, I was frustratingly confused much of the time. 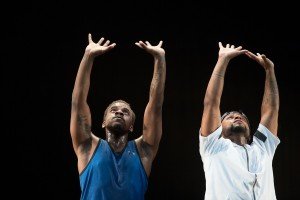 (L to R) Maleek Washington and Timothy Edwards of Camille A. Brown & Dancers in ink, photo by Christopher Duggan

For me, ink’s most satisfying section was Turf. Yet Turf went on for so long, it lost focus. I felt myself wanting a companion to BLACK GIRL, which Turf is, to some extent, but where BLACK GIRL has sections that plainly divide it, assisting the viewer with the changing perspectives during different stages of girlhood, Turf meandered. In its best moments, Turf captured male friendship and the journey from boyhood to manhood, but the progression wasn’t distinct.

The two male dancers in Turf, Maleek Washington and Timothy Edwards, did an extraordinary job. I’m uncertain about the symbolism, but side by side in wide second position, looking skyward, the two, like catchers in the outfield, waited for something to fall and to embrace it. Multiple gestures repeated, but many of them were baffling to me. I sometimes felt like I was watching an exchange of sign language, which I couldn’t interpret. Not being able to read the gestures hindered my enjoyment. Other gestures were crystal clear (the men grabbed their own crotches, rubbed their own chests, reached behind and squeezed their own buttocks, and tried to trip each other like old time comics), but the meaning eluded me, unless these gestures were included only to emphasize that these were men. In an emotionally heavy and virtuosic sequence, Washington and Edwards jerked back and forth as if they were being slapped, and they ultimately collapsed, gasping for air. 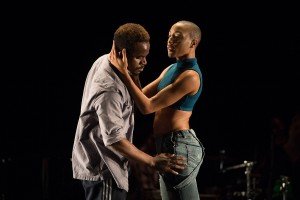 Maleek Washington and Vie Boheme of Camille A. Brown & Dancers in ink, photo by Christopher Duggan

The other strong section of ink was Balance, which depicts love between a man and woman who share the roles of protector, provider, and nurturer. It’s very rewarding to see a duet between a male and female in which no dancer is dominant, where the leader alternates, and the pair dances as equals. Again, Washington gave a standout performance, as did Kendra “Vie Boheme” Dennard. They circled around each other and began a flirtation. Their courtship evolved from joining hands, to walking with arms around shoulders and waists, to resting on the floor lifting a leg up and over the other in a ground-level version of leap frog, and then chasing each other vigorously. In the end, Dennard swept the dust off her body, having conquered Washington, and she walked away with her head held high. Washington combed his hair self-consciously, correspondingly proud of his conquest.

In the section Milkshake, Catherine Foster supposedly danced about her buttocks. She did display that part of her anatomy prominently, frequently jiggling her backside toward the audience, but almost as prominently, she whipped her long hair around, so that her hair might have been an additional super power. I was surprised to learn from the program notes that celebrating an “asset that has been objectified and appropriated” is where the daughter from the last section of BLACK GIRL ends up. I support praising the Black female body. However, I wanted the daughter from the last section of BLACK GIRL to do more than shake her rear. I’m glad she grows up to be confident about her body, that’s important, yet I wish she’d have shown something beyond that. 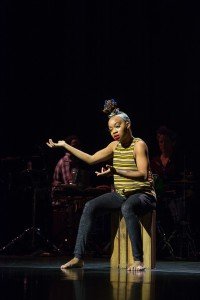 Camille A. Brown in the world premiere of ink, photo by Christopher Duggan

Brown herself opened ink. With a live band behind her (music director and accomplished drummer Allison Miller, plus fellow musicians Juliette Jones, Scott Patterson, and Wilson R. Torres), Brown sat on a wooden block stool, her hands on her knees, her head tilted downward. Above the artists was a huge abstract painting in a thick wooden frame, which was split in half, each torn piece hanging at the same height, but with a great distance between them. Golden yellow, white, and grays predominated in the scenic design by David L. Arsenault. Did the two ripped pieces of canvas represent Africa and the United States? Arsenault also designed the lighting, and this makes sense when you see what happens to the artwork. Textured brushstrokes magically became smooth with a change in lighting, new colors suddenly appeared. It’s a neat effect, and it might have worked better if the large scale painting changed only when the dance sections did. Yet in the midst of some sections, I looked up to discover the painting was altered again, and those fluctuations added to my confusion.

Barefooted and wearing a simple striped shirt and leggings, Brown started with gestures that repeated, a call to share stories that foreshadowed the dancing to come. Rolling, pulling, shaking, fanning, her busy hands moved precisely. She stirred, she sewed, she worked. Drum beats echoed in her movement. 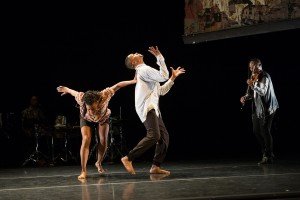 (L to R) Beatrice Capote and Juel D. Lane of Camille A. Brown & Dancers in ink, photo by Christopher Duggan

Toward the end of ink, Juel D. Lane and Beatrice Capote, in a section called Migration, danced a duet that the program said “is about how our bodies hold energy and how we transfer that energy to someone else.” I didn’t exactly pick up on that theme while watching it. I thought it might have been about marital woes. At first, Capote intensely watched Lane, stepping around him as he danced, her hands extended from her side like she might reach to catch him if he fell. Eventually, she placed a flat palm on his back, and Lane ducked and spun underneath her touch. Subsequently, the pair changed roles, and Lane returned the favor, tracking Capote like a spotter as she madly danced.

In Migration II, the final section, the entire cast joined on stage. Brown, lithe and dynamic, kept my attention as the work gained steam. Finally, the dancers gathered together and jumped straight up and down, up and down, in unison, gradually stretching their chests toward heaven. It was a resolution, but I’m not sure that it successfully summarized the multiple layers and dimensions of Black identity and shared humanity that Brown intended. I cannot fault the dancers or musicians, however, as they definitely gave it their all. The audience, which consisted of many more African Americans than are usually present at a contemporary dance performance at the Kennedy Center, erupted in enthusiastic applause and delivered a standing ovation.