A drummer friend of mine has a host of jokes about his craft, such as: “What is the definition of a drummer? Someone who spends a lot of time with musicians!” But artists such as Evelyn Glennie and groups such as the War Drummers of Burundi have shown that drums can be a remarkable instrument. As far as I’m aware, Kodo was the first company of taiko drummers to come to London and their extraordinary skill and the subsonic vibrations reverberating through your body produced an unforgettable experience. And they took it so seriously both on stage and also in training. I remember reading that novice drummers would spend six months in early morning runs and a strict exercise regime before they were let anywhere near a drum. And Kodo was an all male affair. 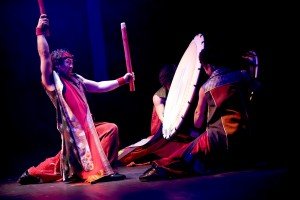 Thus when Yamato first came to London with young women in their ranks and a more playful attitude, it came as surprise, but a pleasant one. Drumming of the highest order on a range of different sized taikos is the staple, with the focus shifting around the stage – sometimes thunderous, sometimes staccato. The opening numbers all had a comic element. In one section the drummers pretend to be reluctant to lean back in an uncomfortable position and they take it in turns to hide their faking from the stern leader. Nevertheless, at the end of the first half, all was serious as with all twelve performers on-stage, a complex tapestry of rhythms blasted round the auditorium, with huge, central drums providing the core beats. 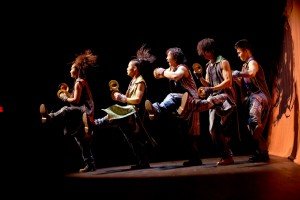 But a question arises: “Is it dance?” Movement and a sense of rhythm are clearly essential and as the performers move elegantly back and forth in perfect synchronisation, it’s easy to see a dance element. Nevertheless musicianship is the key ingredient and versatility is also on show. In one number, the ladies are to the fore with plucked string instruments first solo and then in a group. The men get their chance away from the drums with tiny cymbals producing the sweetest sounds, but again with the most complex rhythms and dance formations.

With such an entertaining and talented group, it’s easy to see why Yamato have performed over the past 25 years in no less than 53 countries and the London audience gave them a resounding reception.