While always something to look forward to each summer for greater Washington, DC area audiences, it is almost criminal to have to wait so long between mainstage productions by Diane Coburn Bruning’s Chamber Dance Project (CDP). The project-based company, made up of an enviable line-up of star dancers from other dance companies around the country including Boston Ballet, BalletMet and Milwaukee Ballet, as well as several equally brilliant freelance dancers, presented its latest eclectic dance program, Grace, Grandeur & Gatsby, June 16 – 19 at American University’s Greenberg Theatre in Washington, DC.

In a city spoiled with great dance from The Washington Ballet and from all over the planet presented at The Kennedy Center, Chamber Dance Project adds to that embarrassment of riches with its own brand of world-class dance and live music. That was once again on display opening night, June 16 as the company’s ten dancers and six musicians presented a program packed with two world-premieres, four repertory works and several music-only performances by CDP’s String Quartet. 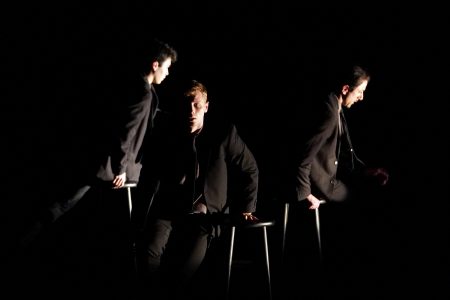 Kicking off the evening was the return of the Bruning choreographed Prufrock (2019). Co-created with theater director Matt Torney and set to an original electronic sound score by James Bigbee Garver, Prufrock is among Bruning’s and CDP’s finest works. Inspired by, and danced to, Torney reciting (in his Irish accent) T.S. Eliot’s 1915 poem “The Love Song of J. Alfred Prufrock,” the work unfolded like a surreal graphic novel with a look to match and fused with a Matthew Bourne dance play. The cast of five, costumed in black men’s suits, ties, and bowler hats, were all mired in this dark, shadowy, often slow-motion world that faded in and out of view as pools of spotlight went from light to dark and back again.

The opening image of three men (Alexander Sargent, Davit Hovhannisyan and Ian Debono) sitting on the side edges of three stools peddling their legs was as if they were running on air. The scene then shifted to Sargent and dancer Francesca Dugarte kneeling around a stool with their chins pressed together. This imagery, and the rest in the work, was evocative of the content and mood of Eliot’s poem and proved quite captivating. 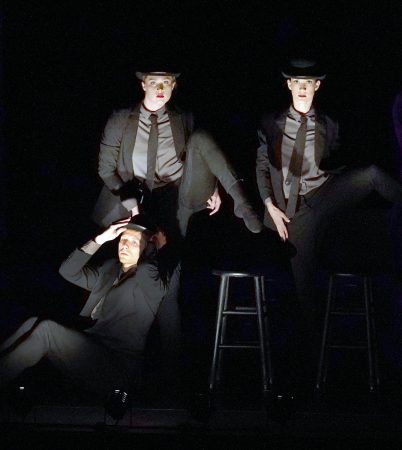 While an atypical dance work, Prufrock is a refined bit of theatrical wonder in which CDP’s dancers shone.

After a music only performance by CDP’s String Quartet in “Don’t Tread on Me,” the musicians then provided the soundtrack to the evening’s first world-premiere, Tommie Waheed-Evans’s Gravity to Grace, playing compositions by Alexsandra Vrebalov and Jlin (Jerrilynn Patton). 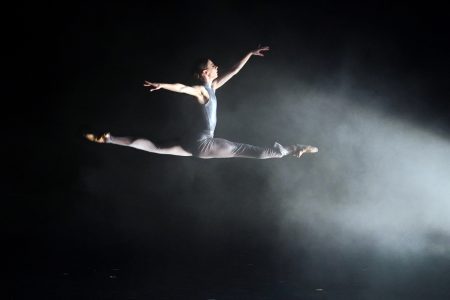 Created partly as a tribute to Waheed-Evans’s mentor, Debora Chase-Hicks, a former principal dancer with the company and with Alvin Ailey American Dance Theater, Gravity to Grace was the first work Waheed-Evans made for dancers in pointe shoes.

Perhaps seen as derivative of well-known choreographers like Alonzo King, Dwight Rhoden and others, Waheed-Evans’s choreography is nonetheless lovely. Long extensions of dancers’ arms and legs create artistic lines that seem to stretch well past physical forms, high leg lifts and off-axis bends and body contortions make for, as this latest work’s title suggests, a mastery of gravity and grace. And while Waheed-Evans’s works (this one included) can showcase visual delight, they can also languish in the sameness of that delight. 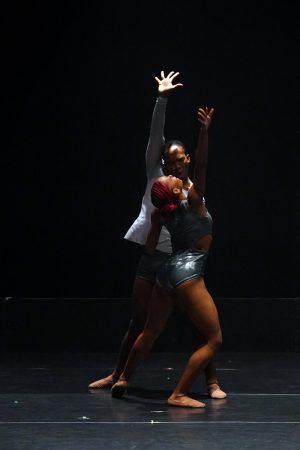 With Gravity to Grace, Waheed-Evans crafted a series of three duets for four dancers that ran one after the other. The work began with an emotional duet between dancers Joe González and Jiamond Watson that evoked an air of melancholy. While danced to music somewhat disparate from the movement style of the choreography, the duet felt representative of Waheed-Evans’s own choreographic voice.

Other duets followed that were danced equally wonderfully including one by Grace-Anne Powers and Sargent, but the work overall seemed to fall back into familiar territory seen in many of Waheed-Evans’s works with regard to look and phrasing. The somber lighting and costuming didn’t do the piece any favors either. In the end, Gravity to Grace was a fine enough dance piece but fell short of its potential to be much more.

Next came the opening movement Coburn Bruning’s Four Men. It featured Patric Palkens in a delightfully flirty solo, sliding, spinning, and turning his way across the stage and into falls to the floor while casting “Check me out ladies” looks out into the audience. The brief, quirky excerpt left plenty of smiles in its wake. 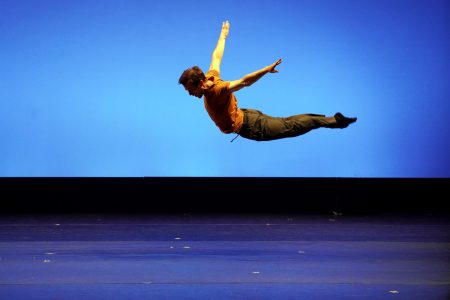 After another engaging performance by CDP’s string quartet, the dancing continued with the live-performance version of Christian Denice’s Dwellings.

Originally a dance film created during the pandemic, the stage version of Dwellings delivered the same marvelously frenetic dipping and diving, back and forth arm waving choreography seen in the film. However, lost in translation from film to stage was its link to the physical structures in our lives we all became keenly aware of during the pandemic’s quarantine days. Without the backdrop of such dwellings that inspired the work and gave it its title, the contemporary dance piece, albeit nicely crafted with lush movement that was deftly danced by its cast of six, felt like just another abstract, bodies-in-motion-in-space dance work. 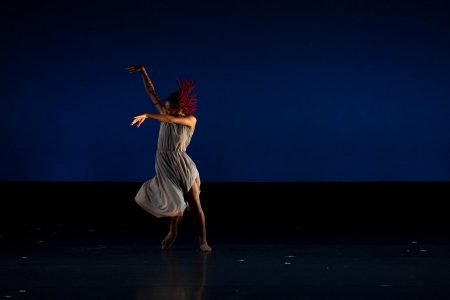 After an intermission, the program continued with an excerpt from Alejandro Cerrudo’s Extremely Close (2007). Sadly, due to the technical constraints of Greenberg Theatre, the work’s signature visual element of white feathers slowly falling onto the stage like snow wasn’t able to happen. The excerpt began however with the feathers already in place on the stage floor. While that element was missed, Hovhannisyan and partner Luz San Miguel’s performances of the duet from the work more than made up for it.

Like fine wine, the veteran pair brought a level of craft and stage presence to their dancing that was a cut above. The swirling partnered moves that made tracks in the blanket of feathers, their heartfelt embraces and running slides across the stage kicking up feathers as well as the final image of Hovhannisyan pulling up a hidden tarp below the feathers from the front edge of the stage to run with it arcing overhead to cover he and San Miguel like a blanket was breathtaking. 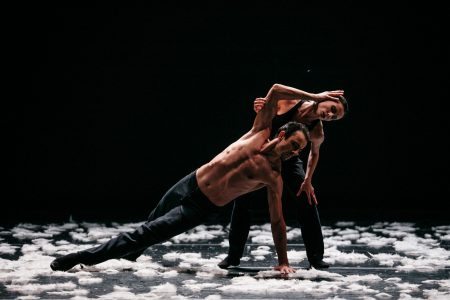 Grace, Grandeur & Gatsby then concluded with the second of the world-premieres, Bruning’s Gatsby.

A different kind of dance work for Bruning and CDP, Gatsby took its inspiration from F. Scott Fitzgerald’s 1925 novel “The Great Gatsby,” but more along the lines of how an impressionist painter might. 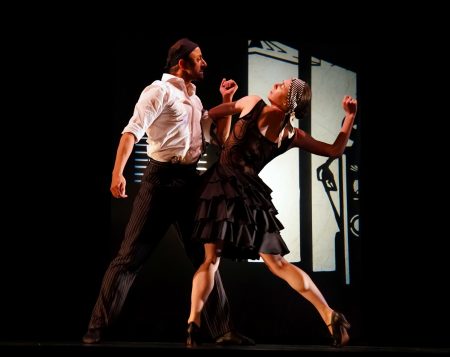 Said Bruning of the ballet in a pre-performance interview: “It’s not a linear re-telling of the “Gatsby” story, rather a surreal, chronologically arranged constructivist approach to it.”

Taking further inspiration from Le Chat Noir shadow theatre in Paris, the work featured two large video screens on which were projected over a hundred paper puppets displaying images of cars, landscapes, people, and varying art deco designs along with silent movie-like subtitle quotes from the novel. Created and controlled by puppeteer Michael Haverty and an assistant, the puppets provided an illustrated backdrop to the dancers who represented the main characters in the book and who danced in front of, and occasionally behind, the video screens. 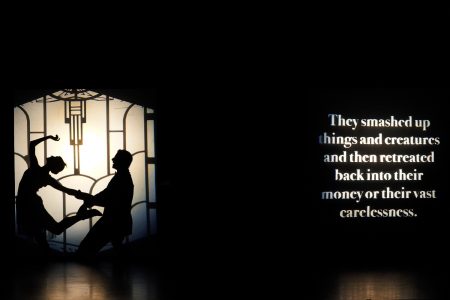 Danced to another original sound score by Garver, the abbreviated “Gatsby” story was told from the point of view of the fickle and shallow character of Daisy Buchanan who was portrayed convincingly by dancer Francesca Dugarte.

Bruning’s choreography, as in Prufrock, was illustrative of the story and the emotional states of each character. Where it went lacking was in the transitions between live action and projections with the dancers awkwardly rolling on the floor between the screens to disappear into darkness or to appear again. Gatsby could have used more of the dancers as silhouetted performers behind the screen and then stepping out from behind the screens (and back again) to make those transitions from shadow to live action more engaging.

All-in-all the ballet was a winner and well worth repeat viewing. Especially, the performances of Hovhannisyan as the bullying Tom Buchanan and Grace-Anne Powers as his naïve and victimized mistress Myrtle Wilson who portrayed her with striking levels of joy and terror.