Just when you think you’ve caught up with most every long-flourishing dance company in New York that’s been flying under your radar, up pops another. The Chase Brock Experience, a company I was not previously aware of, is celebrating its 10th Anniversary with two weeks of performances at Broadway’s Harold Clurman Theatre (in 42nd Street’s Theatre Row). My loss before; my gain now.

Among the ways one can define a dance company is the imagination and creativity of its choreographer(s), the novelty and/or intellectual depth of its dances, groundbreaking step combinations or stagecraft, or the stylistic breadth of its repertory. At least based on this program, the Chase Brock Experience isn’t defined by any of these qualities. Rather, it’s a company in which the competence, boundless energy and engaging attitude of its dancers (there’s not a weak link in the bunch), the musicality inherent in Brock’s choreography, and the pure joy of movement evident in its dances (with one exception) dominate. At least based on this program, the company is an antidote to emotional blues and cold-weather blahs, and to the daily (hourly) doses of Twitter rants and horrific headlines. 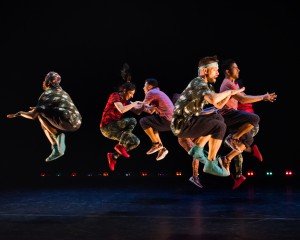 The program consists of a (presumably) representative sampling of Brock’s choreographic oeuvre over the past ten years, including one New York premiere and one world premiere. With the exception of the world premiere, they’re different aspects of the same contagious exhilaration that Brock’s choreography and his dancers’ execution spreads. So I’ll get my discussion of that exception out of the way first.

Without knowing anything more of Brock’s choreography than what I saw Tuesday night, Men I’ve Known, the evening’s world premiere, seems an aberration. Instead of the relatively constant movement aptly reflecting the chosen musical background that varies from segment to segment and dance to dance in the evening’s other pieces, Men I’ve Known is somber, strained, and wearying to watch. It’s so totally different from the rest of the program that one might conclude either that Brock lost his choreographic bearings, or that he intended the piece to present as it does. I suspect the latter. That doesn’t make Men I’ve Known less difficult to appreciate, but maybe there’s something Brock is trying to communicate that I (and, from my vantage point, the rest of the audience) just didn’t get.

Essentially, Men I’ve Known is a series of interconnected poses involving relatively minimal movement, repeated in different stage spaces and with little if anything in the way of overt emotion. To Erik Satie’s Ogives, four men (Travante Baker, Cameron Burke, Kendrick D. Carter, and Ryan Jackson) enter the stage, each carrying a candle display (each of which, to my recollection, with four small candles – maybe representative of the four men) that they place on the floor at the corners of the stage. The men then line up like sardines in a vertical can.  One seems to push another, and eventually one falls like a tree limb onto the arms of the others. The pattern is repeated throughout the dance with slightly different permutations – except at one point two men fall to the floor, the other two place themselves on top of them, they clasp their hands/arms together, and then rotate positions so that the men on the bottom now are on top, but nothing else changes.

Each pose in each sequence lasts seconds, as if the movement sequences represented isolated eternities of memory broken into painfully slow-moving component poses stripped of any overt emotional components (though they might be simmering under the surface). The sense, however, isn’t so much memories relived episodically as a still-life painting that occasionally moves.

Brock says in the program note that he started out making a dance with, not about, men from his life, but realized that the dance was morphing into something not about men, but about the sudden cardiac arrest of one of the company’s founding dancers, Ashley Eichbauer Newman, during a company rehearsal in 2016 (from which she recovered).  Certainly the men falling like tree limbs and briefly being carried might be seen as relating to that, and I’ll grant that Brock is sincere in his creative self-evaluation, but visually it’s a stretch. This dance looks like it’s of and about men and some sort of stylized stripped-bare relationship between and among them. That might be a commendable stylistic exploration, but the piece is difficult to visually digest on its own, and suffered mightily from the program company it kept.

It also suffered mightily from the program company it kept: every other dance in the program was, mostly, pure unadulterated fun. Some pieces, or segments thereof, were better than others, but that didn’t matter nearly as much as the overall sense of jubilation, periodicity, and evolution. A good part of that sense arises from Brock’s effective music choices (by The New Christy Minstrels, Laura Nyro, and Claude Bolling). The concluding piece featured music by Kishi Bashi (the stage name of Washington born and Virginia bred composer, singer, and musician Kaoru Ishibashi), who I had not previously heard of, but the music was in a similar uplifting (though more “world-music”) vein. 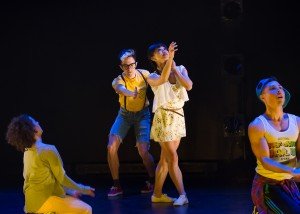 Macy Sullivan, Caleb Teischer,
Yukiko Kashiki, and Cameron Burke
in Chase Brock’s “The Song That I Sing;
Or, Meow So Pretty”
Photo by Kyle Froman Photography

The New Christy Minstrels (“TNCM”) were an early-mid 1960s folk/chorus group with an upbeat, spiritual, white-bread flavor even when the songs had an underlying message. What makes the program’s opening dance, The Song That I Sing; Or, Meow So Pretty (“The Song”) so enjoyable is it doesn’t so much comment on or “update” the TNCM music or the early 60s as it accurately reflects the spirit of both (notwithstanding Brock’s program note to the contrary). As a result, The Song is much more successful than dances that see the popular music of a certain age through a contemporary prism.

After an energetic opening dance (but one that overutilizes finger tutting to the point where it looks unnecessarily affected), The Song proceeds through ten TNCM songs: including the effervescent (and effervescently choreographed and executed) “Green, Green,” to the super happy “A Little Bit of Happiness,” to the energetic but sadly and ironically prescient “My Name Is Liberty” (featuring Alicia Lundgren as the dominant and proudly patriotic Lady Liberty – as in ‘Statue of’ …), to the group’s most memorable hit, the melancholy and achingly sweet “Today.” And The Song has an admirable circular sense (it begins and ends with five dancers assuming the same poses) of time passing and things changing, meaningfully but almost imperceptibly. In addition to Lundgren, the piece included an almost but not quite over the top Burke, Yukiko Kashiki (who epitomized the dreamily forlorn “Julianne” and “My Dear Mary Anne”), Macy Sullivan, and the eyeglass-wearing funny feline Caleb Teicher. 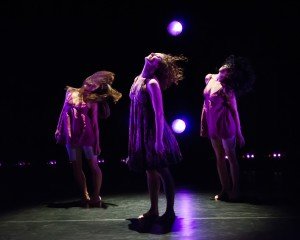 By the late 60s, particularly following the Kennedy Assassination and the tumult of 1968, things had changed, and the songs of Laura Nyro reflect this (if you only know the wonderful but insufficiently edgy covers of many of Nyro’s songs by the 5th Dimension, you haven’t really heard Nyro’s songs). To me, Slow Float (2007), Brock’s reflection on Nyro, was maybe the best dance of the night.

Slow Float‘s component dances to five Nyro songs (beginning with Stoned Soul Picnic and Sweet Blindness, through the concluding Poverty Train) are jubilant when appropriate, but not afraid to penetrate the surface exuberance and visualize the pain that Nyro’s music barely camouflages. Seeing Micki Weiner walking (“slow floating”) unsteadily atop the male dancers’ outstretched hands into a very tentative and not very promising future is a perfect visualization of Nyro’s lyrics unsheathed like daggers. Every CBE dancer excelled, but I will most remember Newman’s seemingly resurrected effervescence, and the endearingly electrified tornado that was Courtney Ortiz. 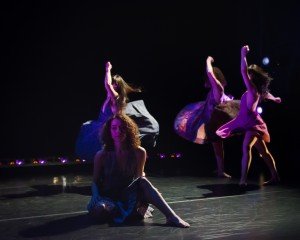 Curious Episode (2009) is Brock’s take on the counterpoint between the two instruments in Claude Bolling’s crossover Suite for Flute and Jazz Piano (#1, Baroque and Blue), with Jean Pierre Rampal on flute. The album was a hit in 1975 – as was the excerpted single from it that Brock uses – in large part because of the music’s unexpected playfulness, and Brock’s humorous visualization of the complementary instrument battle is spot on. Sullivan danced the engaging flute, and Amber Barbee Pickens the pushy jazz piano, and they were both super. 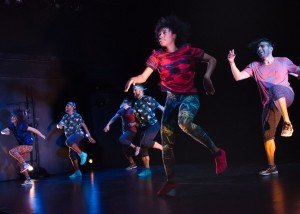 And if Curious Episode didn’t leave you smiling, the New York premiere of Splendor we only partially imagined (“Splendor“) did. I don’t much get the connection between Kishi Bashi’s music and Patti Smith’s memoir Just Kids (from which Brock took the title of the dance), but I don’t much care.  Between the spiritually spirited (and concurrently meditative) music and Brock’s flagrantly elevated physical consciousness, Splendor was a perfect closer, and Baker, Burke, Dean de Luna, Jackson, Ortiz, Pickens, and Weiner were perfect dancers for it.

If you’re looking for something complex, novel, or cerebral, maybe you could pass on seeing the Chase Brock Experience. But I recommend that you add it to you holiday viewing list. Brock manages to accomplish two things that are rare in current dance programs: he reminds you how much fun it can be to watch a dance in which the performers are having so much fun, and at the same time to allow the “million tomorrows” (now the million yesterdays) between an age of innocence and today to “all pass away,” exposing “splendor” that, at the time, “we only partially imagined.” It’s not cutting edge, but it’s an experience.

The Chase Brock Experience will be at Theatre Row’s Clurman Theatre through December 9.