The Girl with the Alkaline Eyes

My introduction to the Chase Brock Experience was in November, 2017, during its 10th Anniversary season. I can be a little slow keeping track of what’s happening in New York, but eventually I catch up, and I regretted not having seen CBE sooner. I found that 2017 program of five dances that summarized Brock’s choreographic oeuvre to date to be, primarily, dances of joy, filled with contagious exhilaration.

CBE has now returned with an evening-length program, reportedly his first (not counting a highly-regarded off-Broadway show that he choreographed, Be More Chill, which is scheduled to begin Broadway previews next month). This piece, however, is definitely not a dance of joy, and its plot is a little strange. Ok, a lot strange. But in a curious, engaging, and operatic sort of way, The Girl with the Alkaline Eyes is still worth seeing. 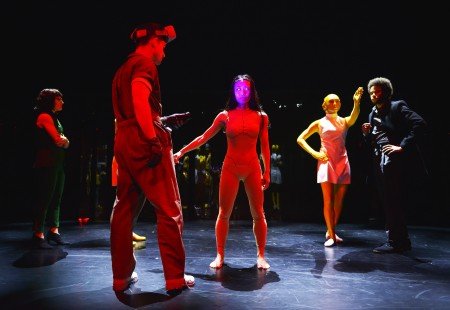 Reviewing The Girl with the Alkaline Eyes is like walking in the woods trying not to step on a twig. It’s described as a “dance narrative,” but also as a “futuristic A.I. thriller.” Being a “thriller” implies something unexpected – which in this case is accurate. The upshot of all this is that I don’t feel free to discuss what in this case needs to be discussed most – the plot. So I’ll dance around it – which to some extent is what the choreography in The Girl with the Alkaline Eyes does too.

The story, or what I feel comfortable telling about it, is of a futuristic entrepreneur, Troy (Travante S. Baker), and his employee / coder named Oliver (Spencer Ramirez) who is working on a top-secret project to create an entity, identified as “Co,”  that has human mannerisms and responses but is purely an example of Artificial Intelligence. 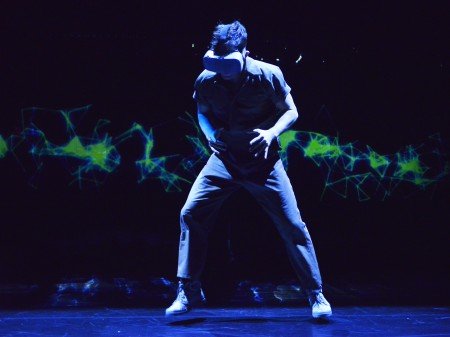 As the piece begins, a number (to the best of my recollection, “98”) is projected onto the upstage wall, and we see Oliver manically entering information into what’s supposed to be a computer screen (open space to the audience) to equally manic introductory segments of the full score by Eric Dietz (who is also credited with the “Scenario”). Scientific methodology is supposed to be careful and deliberate, so Oliver’s ceaseless percolating seemed needlessly exaggerated. In hindsight, that should have been a tip-off.

Soon thereafter Troy appears, trying to convince an Investor (Jane Abbott) that this project is the next Westworld. All this occurs within the confines of what first appears like some underground Victorian scientist-cave, but which converts, when the lights dim, into a futuristic space with perimeters that reflect the action on stage (or what’s projected onto it) and that also create their own visual ambiance by moving like vertical blinds to the flow of interstellar wind. 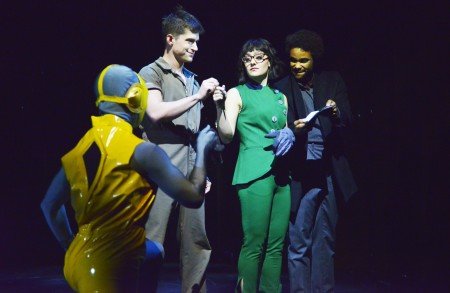 Eventually Oliver walks toward the upstage perimeter, walks through the blind barrier, and pulls out a doll he created with a cut-and-pasted plasticky human form (Amber Barbee Pickens), then pulls out a second creation (James Koroni). Oliver can make them move via his Virtual Reality mask and gloves, but only mechanically, like mannequins with limbs that can be moved on demand. Sometimes. But faster than you can say Dr. Frankenstein meets Dr. Coppelius meets Dr. Ford and Bernard, Oliver goes back to the perimeter and pulls out his crowning achievement, Co (Yakiko Kanishi). Co is clearly an advanced creation: she looks human, moves like Swanilda (forgive the ballet allusions), and helps Troy to convince the Investor to part with her money. 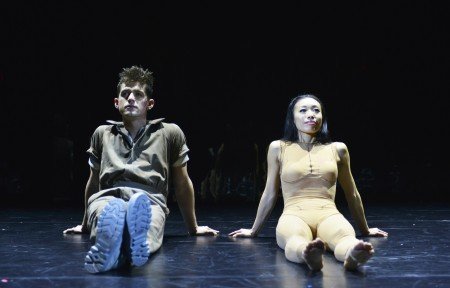 But then the plot thickens, as Co becomes more human-like, becomes “alive” (whatever that means), dances with Oliver, but ultimately falls (much too quickly) for Troy – and Oliver doesn’t seem to mind. That also should have been a tip-off. Anyway, one thing leads to another: there’s a depiction (obvious, but appropriately understated) sex with a robot that may or may not be a robot, an Evangelist who rants about A.I. taking over the world, and a reprise of prior iterations of Oliver’s A.I. creations until Co, the 98th attempt, appears. And in the end, the entrepreneur gets an unexpected return on his investment. I particularly enjoyed the way the piece segues from Oliver controlling Co’s movement through his A.I. controlling gloves, and then realizing that he wasn’t controlling Co at all. [The work “Co” must have a particular meaning with respect to A.I., or maybe it relates to Co being a “co-conspirator,” but the piece provides no definitive explanation.] 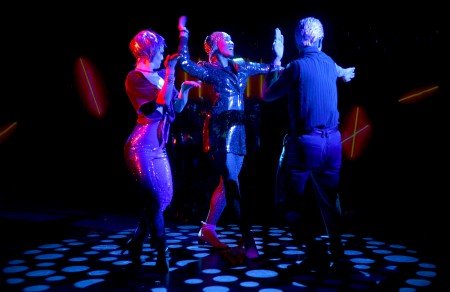 Brock’s direction and choreography makes the most of stage environment within which the plot progresses, but it’s mostly background recitative to relatively few operatic arias, except for a dance for three “clubgoers” that seems to come out of nowhere and lead to nothing, but is very entertaining, with all three faux gold lamé-clad clubgoers (Abbott, Pickens and Koroni) deliberately hamming it up and providing a few minutes of comic relief to the pseudo-serious 70 minute piece. [All costumes were designed by Loren Shaw.] If there’s anything in The Girl with the Alkaline Eyes that brought to mind the Chase Brock from the program I saw last year, it’s this brief intermezzo. 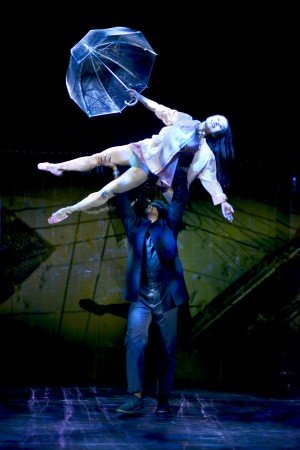 Beyond that, such dancing as there is, besides moving bodies around the stage, consists of interactions between Co and either Oliver or Troy. Some moments of the duets are languid, liquid, and quite lovely (including a particularly inventive one with an umbrella prop), but they don’t last very long. This isn’t a criticism (on the contrary, it provides a glimpse of Brock choreographic potential that I’d not previously seen): had there been more dancing, the piece, in terms of it being a story, would have seemed unnecessarily padded. What was there seemed slight, but it was all that was necessary to keep things moving.

Most of the dancers in The Girl with the Alkaline Eyes appeared with CBE during its 10th anniversary program, and executed as well here as they did then. Ramirez was just right as the somewhat artificially mad computer scientist, while Baker, at first relatively bland as the entrepreneur Troy, became appropriately nonplussed and smitten, and then vice versa, as the narrative progressed. His partnering, essential to pull off the duets with Co, was deceptively deft – more than sufficient to get the job done, but was also downplayed to maintain Co’s status as the piece’s dominant character. Kashiki, the A.I. centerpiece, was both endearing and somewhat frightening as Co (which is how the character is supposed to come across), and her execution of Brock’s choreography made it sing. My only regret was being unable to see CBE’s Courtney Ortiz, who was so impressive during the company’s 10th Anniversary program, but here was a standby for all the female roles.

Through it all, much of Dietz’s score was illuminated by the live (out of view) performance by Rob Berman, Arthur Moeller, and Amy Kang (on keyboard, violin, and cello respectively). 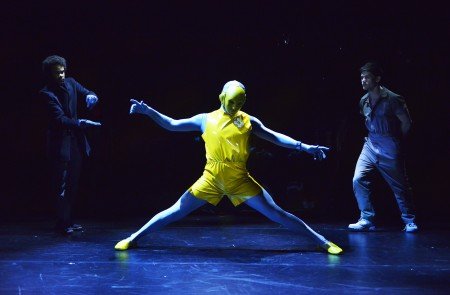 But the star of The Girl with Alkaline Eyes was the staging, which was non-stop (as it needed to be to avoid appearing like a television skit,) and the effects created by the set, projection, and lighting. [The dynamite set, within low-budget realities, is by Jason Sherwood; abetted by projection design by Alex Basco Koch and lighting by Brian Tovar.] And when the lights illuminate Co’s eyes at a certain angle, the effect of the sudden revelation of her “real” alkaline (battery-energized) eyes is striking. As Dr. Ford said (in Westworld): “You can’t play God without being acquainted with the devil.”

The Girl with the Alkaline Eyes may not be the greatest dance theater, but it’s uncomplicated escapist fun, which is always welcome regardless of the bells and whistles it might lack. Its run at the Clurman Theatre continues through January 13.