An annual testament (except for last summer’s pandemic cancelation) to the incredible talent to have trained at upstate New York’s Chautauqua School of Dance, the 4th Alumni All-Star Ballet Gala on Sunday, July 25, once again delivered a world-class evening of dance fit for any stage on the planet. 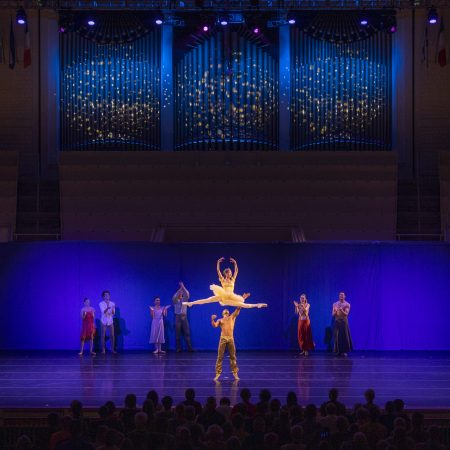 Directed by former New York City Ballet stars Jean Pierre-Bonnefoux and director of ballet studies, Patricia McBride, the Chautauqua School of Dance, on the grounds of the Chautauqua Institution, is one of the leading summer dance programs in the country and a hotbed for young dancer talent. That dancer talent was on full display in the all-pas de deux program at the Institution’s Amphitheater.

Kicking things off were Joffrey Ballet company dancers Anna Gerberich and Edson Barbosa in an excerpt from Yuri Possokhov’s contemporary ballet “Bells.” Their pas de deux began slowly with Gerberich facing her back to the audience as Barbosa moved in to lift her into a position where Gerberich leaned and then folded onto his body. Performed to a piano score by Sergei Rachmaninoff, the pas de deux had a dramatic feel to it. The two dancers were as lovers, excited by each other while also uncertain in their feelings. Possokhov’s measured choreography and the pair’s dancing of it was lovely in this snapshot of a romance. 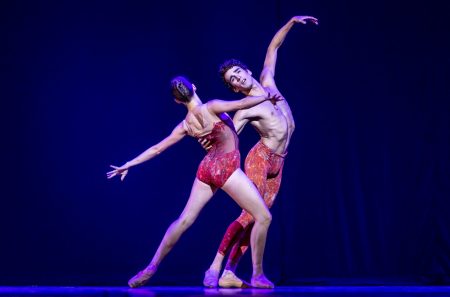 Next, New York City Ballet’s Isabella LaFreniere and Preston Chamblee performed the “Black Swan Pas de Deux” from Marius Petipa’s Swan Lake. As foretold in the title of Neil Young and Crazy Horse’s 1979 album “Rust Never Sleeps,” the past year and a half of pandemic shutdown left several of the night’s performers who had not been in front of a live audience in that time a bit rusty. So it was for LaFreniere and Chamblee who struggled with the pas de deux’s execution. While LaFreniere, in a sparkling black tutu, had a few bobbles, she was mostly sharp in her dancing of the well-known, seductive, and powerful pas de deux. Chamblee on the other hand was rather flat to begin. He struggled partnering LaFreniere and his acting demeanor that was perhaps meant to be serious came off as looking disinterested. That fortunately changed toward the end of the pas when a light suddenly seemed to come on in Chamblee and the pair finished the pas de deux strong.

Keeping with story ballet classics, the evening’s most delightful pairing of English National Ballet’s Brooklyn Mack and New Jersey Ballet’s SeHyun Jin came next in the “Cave Pas de Deux” from Petipa’s Le Corsaire. The pair had mad chemistry and were at the top-of-their game artistically and technically.

Dancing to music for the ballet by Adolphe Adam, the slender and smiling Jin, as the ballet’s character of Medora, moved like a delicate breeze across the stage executing small jumps, turns and bends with ease. As the pirate Conrad, Mack was debonair and a steady partner to Jin in the polished and marvelously danced pas de deux.

Fresh off PNB’s wildly successful 2020-21 virtual season, the pair was also in top form artistically and technically. With vigor they sent legs high into the air into held poses as they marched and saluted each other and the Amphitheater’s audience.

A perfect summer/gala work, the ballet was high on patriotism and full of big dancing moments including an early solo by Wald who playfully acknowledged the audience before launching into a series of big jumps, leaps and turns. Generosa then followed with more high leg lift turns, leg beats, and a split jump.

Infused with humor and delivered with extreme confidence by Generosa and Wald, Stars and Stripes was crowd-pleasing gold, energizing hearts, and spirits.

The program’s second half began with a string of contemporary ballet works. First was a pas de deux from Janes’s ballet Shelter. Dancing to music by Olafur Arnalds, LaFreniere and Chamblee returned to the stage, this time with more focused performances. LaFreniere led things off walking onstage in silence into a spotlight and began a melancholy solo characterized by elongated and outstretched leg and arm movements. She was soon joined by Chamblee and the two engaged in unison choreography that bolstered both their spirits.

For Janes, who is well known at Chautauqua for his devastatingly beautiful classical pas de deux, this contemporary dance for two, while well-crafted, lacked the emotional impact of his classical works. Flirtatious and at times contemplative, the pair dashed and slid across the stage enjoying each other’s company until LaFreniere abruptly left the stage and an emotionally deflated Chamblee. Without the context of the full Shelter ballet in which this pas de deux represented only one of LaFreniere’s character’s romantic relationships — one she perhaps was not ready to commit to — the jolting ending of the pas de deux left you feeling like you suddenly missed something. 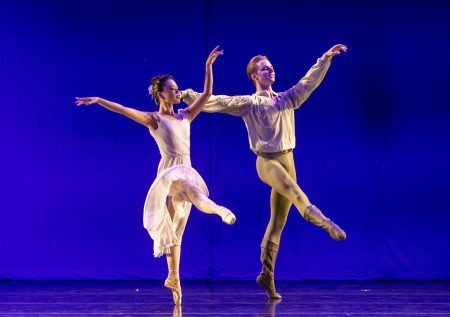 The lone pas de deux choreographed by a member of the program’s cast, Barbosa’s Moody Rhapsody was said to be inspired by his parents’ fiery relationship. Set to music by Astor Piazzola, the pas de deux played out in tango form with Barbosa and Gerberich moving together and alternating between being loving and frolicsome to being combative and quarrelsome in their relationship. While a tad clichéd in its concept and choreography, the pas de deux, which saw Gerberich sinking into a succession of splits to the floor and the pair punctuating notes in the music with their steps, was overall pleasant to watch. And like a melodramatic episode of a telenovela where two lovers fight and forgive, it ended happily with Barbosa and Gerberich locked in a kiss.

After a breezy, arms swaying performance of a pas de deux from Jerome Robbins’s ballet Dances at a Gathering that Generosa and Wald performed brilliantly, the program concluded with a second pas de deux from Le Corsaire; the “Pas de Slave.” Danced once again by Jin as Medora and Mack this time as the slave Ali, the pair wowed. A highflying Mack nailed bravura jumps, leaps, turns and press lifts of Jin in the pas de deux made famous by Dame Margot Fonteyn and Rudolf Nureyev’s 1962 restaging. For her part, Jin was a paragon of grace and classic ballerina beauty. The pair’s performance, along with the entire cast, were met during their bows with enthusiastic applause and a standing ovation from the audience.