This could be a brief review: great songs, great story, great production – go see it. However, although my short description is accurate, the Chichester Festival Theatre production of South Pacific deserves better. 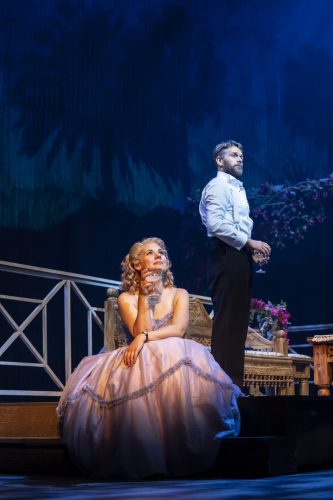 The film version of the original stage production is deservedly famous, but director of this new stage version, Daniel Evans, has made some interesting changes. In a new prologue, we see Sera Maehara as Liat, the young Polynesian woman, performing a gentle dance with flowing movement, sharply interrupted by marines stomping around the stage. An illustration of the encroachment of an alien culture, albeit made necessary by the Japanese war effort in the Pacific.

The story of Nellie and Emile and the characters around them unfolds accompanied by an early succession of knock-out songs from Richard Rodgers and Oscar Hammerstein II: Some Enchanted Evening, There is Nothing Like a Dame, I’m Gonna Wash That Man Right Out of My Hair. I was particularly impressed by Julian Ovenden as Emile de Becque, the French planter with a troubled past. This reaches a climax in the second act, with his powerful and moving rendition of This Nearly was Mine. Gina Beck portrays nurse Nellie Forbush as a lively soul and I enjoyed her singing, particularly in songs when she didn’t feel the need to distort her lovely voice for comic effect. Their love affair is convincingly portrayed. 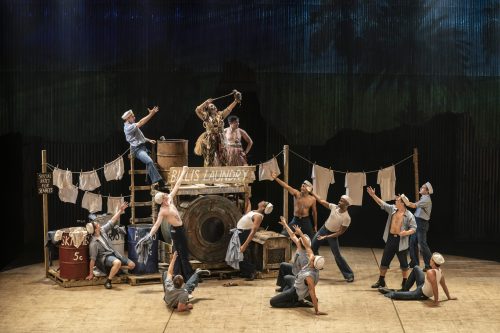 The supporting cast are strong both in dance and vocals, and Ann Yee provides excellent stage choreography and movement direction. Douggie McMeekin portrays Luther Billis as a cheery buffoon and clearly delighted the audience. In contrast, Ray Walston in the film is a tough wheeler dealer, with his various money-making schemes, and was more believable.

The programme notes highlight the importance of South Pacific as a ground-breaking anti-racist work from the 1950’s and Evans was keen to emphasise this aspect. Nellie’s racist shock, at discovering that the mixed-race children are from Emile’s marriage to a Polynesian, is heightened in this production. The song You’ve Got to Be Carefully Taught, describing how racism is not something you’re born with, but instilled by society, was remarkable for its time. It is fascinating to read that when the original stage production was touring, there was sometimes local pressure to drop this song. However, Hammerstein resisted any attempt to undermine the message of his show, driven in part by his own experiences of racism.

The programme notes also describe the role of Bloody Mary, the Polynesian mother of Liat, who makes a living for her family by selling souvenirs to the marines. The production team were keen to portray Mary in a non-racist way. However, Joanna Ampil plays the role in a harsher manner than in the film and appears in her scenes with the marines with a painted face which doesn’t occur in the film. Thus, I was unconvinced that this aspect of the anti-racist message was successful. Nevertheless, Ampil does great justice to her beautiful song, Bali Ha’I, which is never far from my memory. The relationship between Liat and the young Lt. Joseph Cable is sensitively portrayed by Rob Houchen and Maehara.