I find it hard to believe that 11 years have flown by for Producer Eva Stone’s love child, the Eastside’s modern dance festival known as CHOP SHOP. Stone has presented quite a gamut of modern contemporary dance during this time — from the very experimental, to improvisation, and to the more traditional. This has included solo dancers who were also their own choreographers and also large ensembles, some local, some from the region, and even some international artists.

The results are generally mixed, with some programs being stronger than others. Even curated and screened, you don’t really know how something is going to fully come across until it actually hits the boards. Such is the adventure, fun, excitement, and risk of live performance theatre.

This year’s edition began unusually enough with a film titled Trapped (choreographed by Alicia Mullikin), which reminded me of some of Jerome Robbins’ best sneaker pieces, this one taking place in what appears to be an abandoned garage. The four dancers indeed appear to be trapped, not only within the confines of structure, but in their relation to their bodies and to each other. Futuristic, I found Trapped to have been the right length and enjoyed how the film’s edits crosscut from dancer to dancer or group, allowing each to have their say. There was beautiful dancing by Cheryl Delostrinos, Samuel Picart, Fausto Rivera Contreras, and Mullikin.

Mullikin was also the creator of the last work presented, En brazos entre lineas enemigas (arms between enemy lines), performed by members of the Au Collective. It was a large group work that sometimes impressed me as zombie-like with the dancers deadpan expressions, partnering, and how they’d suddenly come together as a group into a single focus, reminiscent of some current zombie movies.

The second work was a light in tone contribution by Spectrum Dance Theatre’s Donald Byrd, editorially titled Geekspeak (or just another dance with dancers wearing socks for no apparent reason). I always want to see dancers’ feet! Dancers Blair Elliot, Alexander Pham, and Mary Sigward delivered clear, clean dancing in the mode of Merce Cunningham — lots of movement phrases in and out of fifth position, with quick darting action and small jumps. This work was perfect for this program and venue. 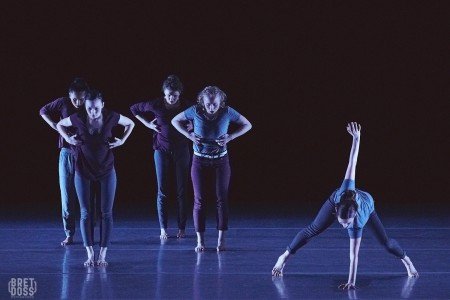 A Series of Lies That Tell The Truth was Stone’s own contribution to the first half of the program. It’s a work for five women, all members of the Stone Dance Collective: Valerie Grabill, Julia James, Molly Levey, Sarah Poppe and Emilee Putsche. Perhaps the title was in reference to today’s political climate? (If you are reading this fifty years from now, look it up!)

Dance-offs are a popular catalyst for dance makers. Mari Meade’s dialogue was just what the title suggests but also a bit of a contest between two gifted and very talented dancers — Kyle Davis, who appeared courtesy of Pacific Northwest Ballet where he is a soloist, and Rebekah Downing. The technical demands were unreal, such as multiple tilted pirouettes, extensions (Downing has probably some of the longest legs anywhere), penches, and much much more. This was lively and exciting.

While I’ve admired Mark Haim’s work in the past, I found his Parade not “ironic” as the website program notes would indicate, but to have stepped beyond the line of good taste into the perverse. While very well danced by its large ensemble, it was a disturbing piece, with 10 women at one point on their backs, hips up in the air and madly shaking their shoulders and chests as if in mortal agony. What is this — throes of childbirth? Sexual assault? A comment on men and women of today’s times? In any case, for my money, Haim should have reined it in a bit. Composers Jule Styne and Bob Merrill would have been mortified to see their “Don’t Rain on My Parade” interpreted in this manner.

Duets are a fun and nice way to explore shapes and interactions as was the case with Courtney Mazeika’s eventually, performed by Mazeika and Marlie Couto.

Kyle Davis has been inspired by and explored bird themes before, recently for PNB’s Choreographer’s Showcase with his Variegated Voices, which I found extraordinary and wonderfully unworldly and which was in a serious vein. This time with his Voices Revisited he took a lighter and playful tone beginning with Matthew Renko as a birdwatcher and the rest of the cast channeling their inner ornithology studies for an exotic ballet that tapped into the native talents of these highly-trained dancers, who alit the stage courtesy of PNB: Christopher D’Ariano; Angelica Generosa; Elle Macy; Elizabeth Murphy; Sarah-Gabrielle Ryan; Renko; and Dylan Wald. Set to overlayering Beethoven and bird songs of Canada, it was a fine, fun piece that demonstrated again Davis’ choreographic skill, eye, and talent. A case where wearing red socks was appropriate, giving an indication of the bird-like. 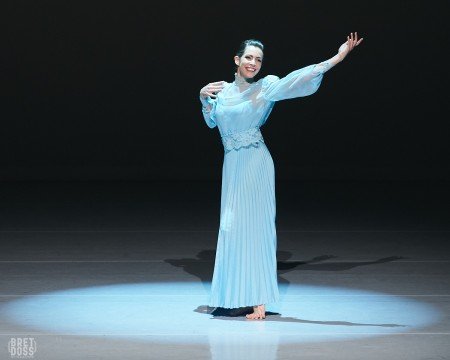 Vanessa Owen of Stewart /Owen Dance made her own solo, After Party based on “The Party’s Over” song by Anita O’Day. Owen mined great material and is a superb performer and struck the right balance of humor, irony, and just plain good old dancing. I enjoyed her many visual references to dancers of the past including Ginger Rogers and Rita Hayworth. Whether this was done consciously not, I don’t know, but it made for great effect.

Part of the fun of attending Chop Shop is Stone’s variation each year on welcoming the audience and introducing the program. This year, a voice-over “instructed” her with amusing results, which was very creative and fun.

I can hardly wait for 2019’s edition! Thank-you Eva, for making this an important part of the region’s dance scene and for your hard work in what it takes behind the scenes to get each edition from concept to fruition.