Some people assume that in order to see great dance, you have to pay at lot of money and go to venues like the Kennedy Center, where you can watch dance companies with big name stars and international reputations. This isn’t true. An expensive ticket at a large venue doesn’t guarantee that a dance performance will be great, and a relatively inexpensive ticket at a small local venue doesn’t mean you won’t get a night of great dance. It’s always a little bit of a gamble. Sure, it helps that places like the Kennedy Center tend to select acclaimed, well known dance companies for their performance schedule. That often means the dance companies they feature are good, at a minimum, and it’s reasonable under those circumstances to expect good dancing. But great dancing is something else. I want to reassure anyone out there who thinks great dancing exists only at renowned theaters, by renowned companies, for a hefty fee, that this thinking is demonstrably incorrect.

A recent performance by Christopher K. Morgan & Artists (CKM&A) proves the thinking that an expensive opera house dance experience is always better is wrong. The performance I saw was genuinely great. It was great in the way that great dance performances at the Kennedy Center are great. I’m not talking about a different kind of great, a lower standard for a small regional dance company. I’m talking about that very special sort of great that sends you floating happily out of the theater. It’s a universal great. And it can happen anywhere. When you see a great dance performance, you don’t think twice about where you saw it or the price on the face of the ticket. You’re simply thrilled for having had the experience of watching great dance.

I happened to attend the CKM&A performance on an evening when ticket prices reached the approximate level of a side orchestra seat to a Russian ballet company. But this cost is not the normal price point for Dance Place, where a ticket generally runs from $15-$30. Instead, the opening night tickets were part a fundraising event and marked the debut of CKM&A, led by Dance Place’s new Executive Artistic Director Christopher K. Morgan, as a Dance Place Resident Company. The special event ticket price was worth it in terms of the quality of dance presented (and the price included a post-show party with drinks, food, and a DJ). I don’t think anyone who cares about great dance would feel that the money, which goes to support Dance Place and CKM&A, was not well spent. And the folks who paid the lower ticket price on Sunday most certainly got an incredible deal. 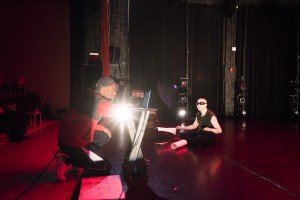 Morgan started off the evening with a solo from 2008 called Unpredictable Repeat Hesitation. It’s a fun work that relies on a measure of audience participation. Audience members are invited to select music from a laptop at the front of the stage for part of the score, and later in the work they’re encouraged to call out “Repeat!” when they see movement they’d like to see again. Morgan begins by conducting his own performance with a disco-style finger pointed high in the air, and he ends this way, too. In between, electric cellist and composer Wytold joins Morgan for additional musical accompaniment.

On opening night, among the music chosen by the audience was Prince’s “I Would Die 4 U.” It probably wasn’t a coincidence that the lighting changed briefly to purple. Morgan hammed it up, throwing in hand gestures to mimic the lyrics. And in the section during which Morgan is repeatedly asked to repeat, there’s plenty of humor as well. I worried that the piece would amount to something merely light and cute, but no, Morgan is too talented for that. He manages to entice the audience with his playful and charming cleverness and then, ever so slyly, he strikes hard with something much more profound.

Although he’s always trying, Morgan reveals that he finds himself repeating and repeating many of the same moves (and he demonstrates them for us). The hesitation comes when artists question themselves, and I think they do that frequently.

In the work’s final section, Morgan, in a thoughtful soliloquy, reflects on the task of artists. Artists are supposed to be unpredictable, he explains, and there’s pressure in that expectation. Morgan brilliantly discussed in his monologue the March for Our Lives that occurred earlier that day. He observed how much he admired the young people who spoke up. Morgan has in common with the brave students a strong voice. I’m thankful for artists like Morgan and also for the adolescent activists demanding stricter gun control. I hope Saturday buoyed their confidence so they will continue to try. 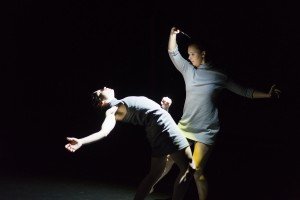 CKM&A in Tiffanie Carson’s B.U.G. [Backlight. Uplight. Glare.], photo by Mark Hoelscher
Next up was the premiere of Tiffanie Carson’s B.U.G. [Backlight. Uplight. Glare.]. Wytold provided a beautiful original score, and Ben Levine, according to Carson’s concept, created the lighting design, which incorporated a handheld lighting instrument. Carson designed the costumes — turtlenecks that just cover the rear end for the women (Lauren Christie, Abby Farina, and Rachel Shaver), a shirt and pants for the sole male dancer (Deontay Gray), in solid grays and white like out of a black and white photo. The handheld lights easily could have overtaken the work and become a distracting prop. Carson avoids this, and achieves the opposite — the unique lighting, although it’s vital to B.U.G. [Backlight. Uplight. Glare.], is a seamless part of the performance and almost acts as a fifth dancer.

A light in one dancer’s hand shines like a flashlight against another’s dancer’s body, generating bright spots and deep shadows. Sometimes imposing shadows stand tall on the scrim behind the dancers. The lighting effects are simply stunning. I felt like I was at an art gallery. At each sweep of the light, a dancer’s body becomes a sculpture, but the sculpture moves. The lights, moving up, down and around, tracing the dancers, literally illuminates the dancing and highlights human expression and musculature in a breathtakingly ravishing fashion. Some of the dancing necessarily stays unseen, in the dark, and that’s alluring. I found myself wondering, eagerly, what I’d see next.

Carson’s choreography maintains the visual interest. Bodies undulate as light travels over them, and the limbs of the dancers stretch and extend seemingly into infinity. A pair looks away, only to be drawn together, back to back or cheek to cheek. A head ducks under, a leg sails over, and new shapes continually emerge. There’s something disorienting about the lights in the dancers’ hands circling, but it’s not uncomfortable, it’s beguiling. I was reminded of 2017’s tantalizing total solar eclipse. Both the eclipse and Carson’s latest work brought incredible excitement. B.U.G. [Backlight. Uplight. Glare.] is another certified hit for Carson, and it would be a smart move for companies to commission her choreography. 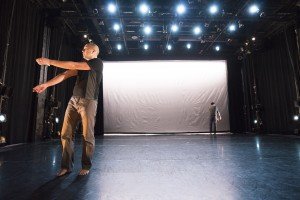 Another female choreographer who merits attention is Adriane Fang, a former dancer with Doug Varone and Dancers who currently teaches dance at the University of Maryland. Her duet, conflict/Resolve, is as intriguing and impactful as B.U.G. [Backlight. Uplight. Glare.]. Go female choreographers! Morgan and Guest Artist Alex Springer, also a former Doug Varone dancer, alternatingly devastate and uplift. I couldn’t decide with any certainty what their precise relationship to each other is, but as the title promises, there’s conflict.

The music (Clapping Music and The Four Sections: Full Orchestra by Steve Reich and Ambient by Dorian Wallace) is captivating and unyielding. Morgan and Springer, who wear casual attire, are wary of each other, and there seems to be simmering resentment and a sense of competition between them. They circle each other like animals, and when they come together, it’s at first more a matter of getting stuck to each other than voluntarily seeking any intimacy. Their communication consists of arms that tear at the space in front of them, and this style of “speaking” is interrupted by one of the dancer’s grabbing the other’s elbow and/or nudging the other out of the way.

The tension in conflict/Resolve escalates, and although hands are grasped, the swinging around that results still has violent undertones. It’s not really a surprise when one dancer ends up, with a thwack, in a heap on the floor. Even in gentler sections, with a hand on a shoulder, or around the other’s waist, or in an embrace, I doubted the lastingness of peace. Whatever their dispute, this couple can’t quit each other.

Two movement sequences I especially enjoyed that repeat are the two men, side by side on their backs, squirming as they inch forward on the ground, and the dancers, entangled, facing each other, arms flailing at shoulder height like they’re struggling to swim. Fang’s conflict/Resolve is a tour de force, and I found myself somehow wanting to cheer before it was finished at the sheer grace of it. 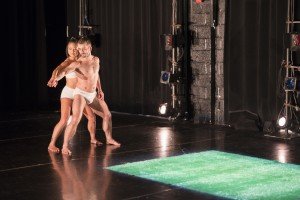 The closing work, Morgan’s Inconstancy, from 2014, is one I’ve seen before, but I warmed to it more this time out. Dancers Mat Elder, Carson, Farina, and Gray conjure a cartoonish world of perhaps newlywed neighbors, who are caught up in keeping up with whatever the other has — which, in this case, consists of a blanket of green turf, a lamp, and rotund piggy banks. Inconstancy begins with couples in white underwear. Sort of like Adam and Eve, they discover self-consciousness and then longing. With the unfurling of the grass carpet they launch on a path toward their American dream. The music, an original score by David Schulman, is congenial and folksy, and once the dancers put on something over their underwear the costumes by Morgan with Roxann Morgan Rowley are extremely colorful (dominated by bright pink).

There’s a lot of symbolism and humor in the work, and it’s poignant and entertaining. Morgan’s choreography requires the dancers to exercise their acting chops, and this cast did a very fine job. Is the burden of a marriage illustrated by the women slung over the backs of the men as the men, on their hands and knees, try to crawl? When shaking their piggy banks, one is full of clanging coins, another is silent, filled with only dust. Inconstancy is tragicomedy, I guess. Despite the abundant humor, there are eruptions of serious, heartbreaking emotions. My friend thought one the men, who pulls his shared green rug over himself, covering all but his feet, dies at the end. I couldn’t tell her she was mistaken. 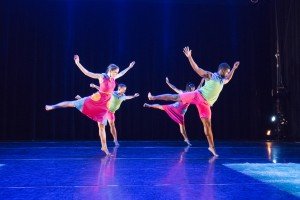 I can’t recall many dance performances I’ve seen, at any price or location, that have been as successful as this night was. I’m happy to report that Dance Place is in good hands under Morgan’s new leadership, and CKM&A is clearly going to be an asset as a Resident Company there.

A final note — although I’ve been known to rave about Morgan’s abilities and some people have questioned my relationship to him, he and I are unrelated, despite our common last name. To my knowledge, neither of us is related to Roxann Morgan Rowley, either!