For her last production as Cincinnati Ballet’s Artistic Director, Victoria Morgan programmed a mix of tried-and-true repertory favorites along with a new ballet by company dancer David Morse and appearances by guest dance companies AXIS and Dayton Contemporary Dance Company. The Bold Moves Festival, May 12-22, 2022, was a fitting send-off to her 25-year tenure there that was full of its own bold moves. She leaves behind an impressive legacy that includes rescuing the company from financial straits and then growing it in size and stature, being an early champion of women choreographers, and being a main force behind the construction of the company’s new 31-million-dollar Margaret and Michael Valentine Center for Dance. She will be succeeded by new company Artistic Director Jodie Gates this August. 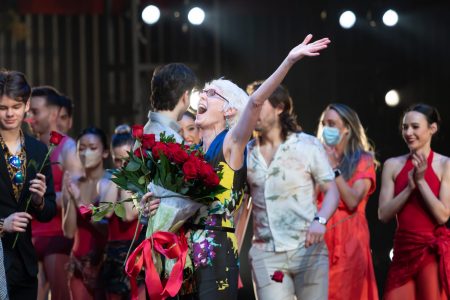 Comprised of two distinct programs running concurrently over two weeks, Program 1 of the Bold Moves Festival on May 21 at 2 p.m. began with choreographer Helen Pickett’s “Petal.” Created in 2008 for Aspen/Santa Fe Ballet, the contemporary ballet was inspired in part by the vivid pastel colors of gerbera daisies that were reflected on floor-to-ceiling curtains framing three sides of the stage. Vibrant yellow first lit up the stage, matching the yellow leotard costumes of the cast’s four women. Its four men were shirtless and in teal-colored tights.

Dancing to undulating and driving music by Philip Glass and Thomas Montgomery Newman, the eight dancers brought forth their full technical prowess in sleek, pure of line choreography. The women, on pointe, jabbed elongated legs at the stage floor then retracted one leg upward to fold at the knee, looking like stylized flamingos on the march.

Delivered in a series of solos, pas de deux, trios, and group sections, the dancers were décontracté in their transitions into and out of Pickett’s beautifully crafted movement phrases. Highlighting the ballet were adroit performances from dancer Melissa Gelfin De-Poli, who whizzed through a series of turns with the seeming power and pace of a cyclone, and the trio of Taylor Carrasco, Matthew Griffin, and Maizyalet Velázquez in a clever twisting, turning, and up and down lifting of Velázquez matching the music’s tinkling run of piano keys. 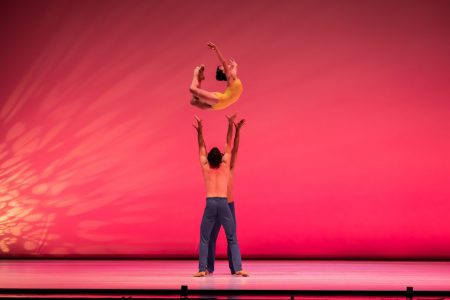 With its ever-changing color backgrounds and bodies in constant motion, Petal provided an eye-opening showcase for each of its eight dancers to shine individually and together.

Next, the company performed Twyla Tharp’s Nine Sinatra Songs (1982). A favorite of ballet companies across the planet along with Tharp’s In the Upper Room (1991), Nine Sinatra Songs, as its title indicates, uses nine songs sung by “Ol’ Blue Eyes,” Frank Sinatra, from which Tharp fashioned eight pas de deux and a closing group section.

Costumed in Oscar de la Renta designed formal wear of varying-colored gowns for the work’s seven women and black tuxedos for its seven men, Nine Sinatra Songs was a blend of nostalgia for the Golden Age of Hollywood dance numbers and Tharp’s biting wit and movement creativity. Sinatra favorites such as “Strangers in the Night,” Somethin’ Stupid,” and “One For My Baby (and One More For The Road)” were turned into pas de deux mini-relationship stories. While all of those were brilliantly choreographed and marvelously performed by Cincinnati Ballet’s dancers, a few other dance sections rose above. To Sinatra’s “All the Way,” dancers Bella Ureta and Morse moved with the style and elegance of ice dancers in a succession of flowing lifts and turns, and dancers Katherine Ochoa and Chandler Proctor captured the rough and tumble physical relationship of a gum-smacking mug and his tougher than nails dame to the song “That’s Life.” The work closed with the full cast reprising bits of their pas de deux in the Sinatra classic “My Way.” 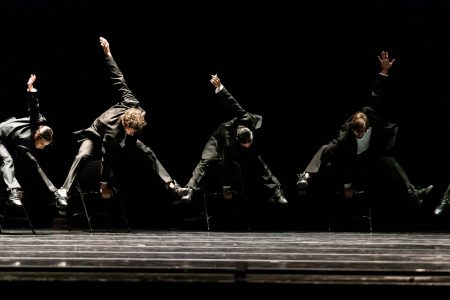 Closing out Program 1 was Ohad Naharin’s signature work, Minus 16 (1999).  Another darling of ballet companies far and wide, the work took a hiatus from the repertory of most companies during the pandemic for its then verboten close-quartered audience participation section. 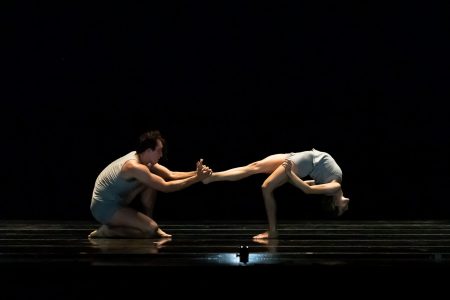 Naharin’s masterpiece is one of those rare dance works where the stars aligned, and the sum of its diverse and quirky parts makes for one hell of a whole. From its opening solo improvisation to the song “Cha Cha Cha D’Amour” as audience members settle into their seats — this time performed by the captivatingly bizarre Daniel Wagner — to one of the most visually stunning sequences in dance as twenty or so dancers in black suits, ties, and top hats sit hunched over in a semi-circle of chairs around the stage, then in canon, suddenly bursting up to flail backward with arched backs as if having been shot, then bounce back up to shout at the top of their lungs lyrics from the traditional Passover song “Echad Mi Yodea” (Who Knows One) to the aforementioned audience participation section, full of spontaneity and colorful audience members, Minus 16 is a work that year-after-year maintains its popularity. 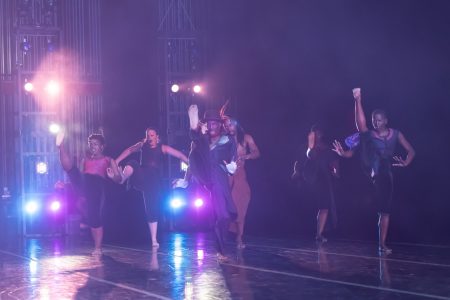 Program 2 at 8 p.m. on May 21 led off with choreographers Donald McKayle and Ronald K. Brown’s Children of the Passage, performed by Dayton Contemporary Dance Company.  The work, set to music by the Dirty Dozen Brass Band a la second line New Orleans marching bands, followed a group of sinners haunted by manes, one in the form of a voodoo witch doctor-like ancestral character. The work followed dancer Countess V. Winfrey’s character, one of the sinners, who seemingly dies, and the others have a funeral for. She rises again as an angelic figure in white to redeem the others. With a mix of modern, African, and social dance funk, DCDC’s dozen dancers brought the party and the redemptive spirit to Procter & Gamble Hall, garnering the company a standing ovation. 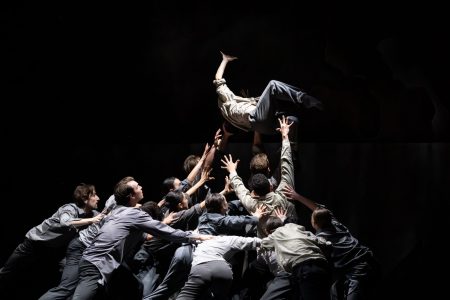 While not the last word in Holocaust-themed ballets, the world-premiere of Morse’s Our Story was as impactful as any out there. Theatrical to its core, Morse’s ballet began with tableaus in spotlight of Jewish families circa World War II, along with a sinister group in all black symbolic of the infamous Nazi Brownshirts. Performed to music by composers Steve Reich, Arvo Pärt, and Luc Ferrari, disturbing images of families in upheaval, individuals being abused and terrorized flowed one after another as they were rounded up and imprisoned in an onstage representation of a concentration camp. Here, Morse could have done with less chaotic back and forth panicked running about the stage and with more creative choreography to express the scope of such trauma. While he never uses actual iconography from the Nazis and WWII, it is clear this is what Morse’s ballet is about. 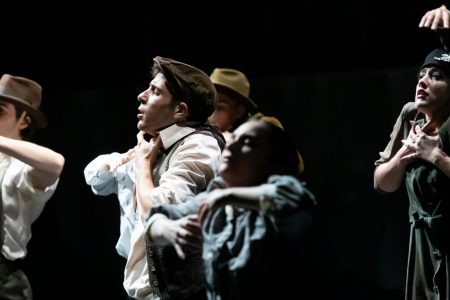 Far and away the ballet’s most dramatic and memorable imagery came when dancer Luca De-Poli, portraying the concentration camp commandant, stood at the front of the stage, back to the audience like the conductor of an orchestra as he directed with his hands and fingers groups of terrified camp inmates to run en masse to one side of the stage and press their bodies against a wall, arms high and legs spread apart, and then others to run to the other side of the stage. 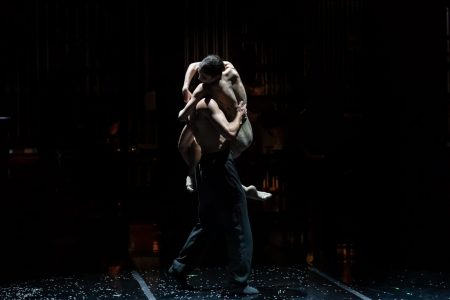 Stage snow, this time representing the ashes of incinerated bodies, then rained down on the stage before everything suddenly stopped and dancers Taylor Carrasco and Christina Laforgia Morse came together in spotlight to dance a heartfelt and somber pas de deux to solo piano music. The pair moved with quiet confidence through difficult lifts, holds, and tugs at one another’s bodies. 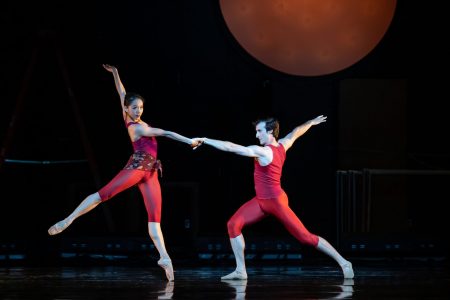 Switching gears, Program 2 then ended with Morgan’s signature ballet Bolero to music of the same name by Maurice Ravel. Of the many dance interpretations of “Bolero” in existence, Morgan’s is one of its most unique. In it, she uses the progression of young dance students to professionals and the progression of a typical ballet class from bar work to movements across the floor as motifs.

Apart from being a smart way to involve students from Cincinnati Ballet’s Otto M. Budig Academy, the ballet’s five pas de deux and ensemble dancing are some of the best choreography Morgan has created in her career. Standouts in the ballet included dancers Sirui Liu and Minori Sakita in a test of technical skill one-upmanship, powerful men’s and women’s sections, and Liu and partner Chandler Proctor in a fast-paced, back and forth pas de deux dense with deft lifts and turns.