Spring is a long time coming in London but an evening in the company of Circus Abyssinia floods the tent with warmth as the Ethiopian cast romp through the hour long show with skill, smiles and infectious enjoyment. Ethiopian Dreams weaves its magic with little fuss. The costumes are simple, cleverly designed dancewear or just casual gear, the props are minimal, and the real draw is the hugely talented cast. 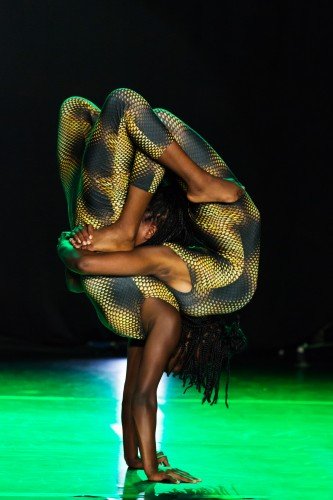 The four young women, dancers and acrobats are all superbly skilful and so much stronger than their slender, graceful bodies indicate. In a duet, Sun-worshipping Pythons, suitably clothed in snakeskin leotards, they wrap around each other in a confusing tangle of limbs. Later they join the other women to make an acrobatic quartet building layers of bodies, arched and balanced, spinning cloths into umbrellas of colour on their hands and feet in all imaginable combinations. They keep their warm smiles throughout, accompanied by cheers and gasps from the audience. 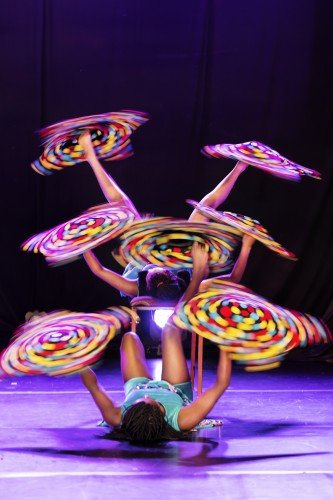 The hand-vaulting, all male opening act tested the skill and bravery of the two young tumblers, Ezera Nigusse and Alemayehu Mulugeta, and their older catchers in an amazing feat of balance and dexterity. But it was the Chinese Pole act finale that gave the men their moment of glory. The poles were set up in a matter of minutes for the men to scamper up and slide down with frightening speed. They vaulted over each other, swung round and stretched out displaying their courage, strength and skill in a myriad of new tricks. 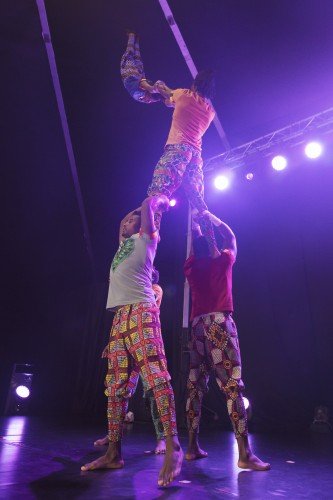 The evening was balanced with a comic interlude featuring Daniel Gezahegn gleefully performing non tricks and then enlisting the help of two audience members to join him in a wicked piece of tightrope deception. The company’s founders, brothers Bibi and Bichu Tesfamariam provided one of the evening’s high spots in an exhilarating display of juggling. As the number of bright red batons increased and the excitement grew, they retained their nonchalance and easy charm in a routine that made riveting watching. Advertised as a family show, it kept both children and adults on the edge of their seats proving Circus Abyssinia’s universal appeal.