March 26, 2017
It’s Just An Orange Vest, The Deconstructed, The Firebird

I should let you know up front that I’m biased when it comes to Ballet Bellevue (dba City Opera Ballet). This is partly due to recently being one of the Company Teachers (a great experience — for me and hopefully for the dancers!) and also due to the fact that I made a ballet myself for this company in the early ’90s. Nevertheless, I’m happy to jump into giving some thought and commentary on their recent program. I was given permission by one of our editors after double checking to ensure this was going to be okay and not bump into a conflict of interest. 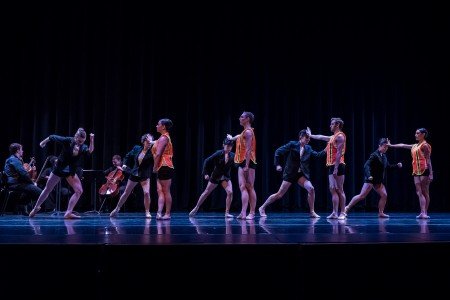 Ballet Bellevue is a collection of very well trained and highly talented dancers who come together for specific projects, in this case Jennifer Porter’s production of The Firebird (with full orchestra), plus two other works — one by Porter and the other by Laura Rodriguez. Porter sets her Firebird in the slightly gritty and urban environs of Seattle’s Pioneer Square (using scrim projections by Galen Wicks), giving it a contemporary aura, rather than the old Russian folktale setting that’s typically used. There is still an Ivan, a Firebird and a villain, but only the Firebird is magical. The summary of the story here is that a young man wanders into this area and is almost immediately set upon by tarts, the villain (who appears to be a combination pimp/drug pusher), and shoppers. He encounters the Firebird who, giving him a feather, promises him that he can use it to summon her. Thus he does and is rescued from being pummeled.

This Firebird not only saves, she also transforms these characters…and afterward Kashchei (the villain) has his power over the others destroyed by Ivan’s tearing it up (in the form of paper contracts it would appear), following Ivan’s locating it in a business briefcase (in the folktale, it’s in a egg). These transformed characters resume being real people in cheerful Spring garb and colors. (Prior to this, everyone except the Firebird who is in red, was in Seattle black.)

Porter makes full use of her dancers’ talents and smartly segments the structure of the ballet into quartets, a couple of extended pas de deux for Ivan and the Firebird, and the full company for its end to the rousing, exciting Stravinsky score.

One of my favorite historic pictures is that of the original Firebird, Tamara Karsavina, clenching her fists, with eyes closed and chin raised, reacting to a discussion she is having with Marie Rambert about Pushkin’s poetry. Karsavina was known as a great artist and soul. (Here is a link to a clip of her doing a short barre at her London home:   https://www.youtube.com/watch?v=aMsHWuLbsOI   .  Great technique and you can see the soulfulness of her work in this other clip as well:      https://www.youtube.com/watch?v=G_s-U_l6zx4   ).   Another image that comes to mind is of her coaching a next generation Firebird in her part – -the great Margot Fonteyn. (Fonteyn has a story about this that she recounts in her autobiography.) In a 1950s film capturing Fonteyn’s interpretation of this role, using the original Fokine choreography, there is the great passage where the Firebird takes an apple, biting into it, tosses it away with great passion and feeling. We know from this short bit that the Firebird is wild and untamed. Even though Porter sets her vision in today’s world, nevertheless the Firebird still comes across as a wild creature. It’s only the feather that allows Ivan to draw any power from this primitive being. And as the creature, Chessa Chalmers is a powerhouse and perfectly cast as the eponymous Firebird, easily essaying her way through the technical assignments, including 10 very fast fouettés during a short solo. 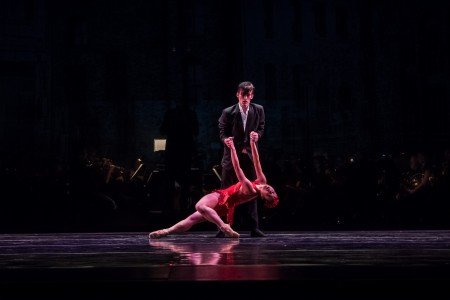 Kyle Johnson’s Ivan was an excellent portrayal of a young man who has come into the wrong place at the wrong time but whose inner character saves not only him but those also under the influence of Kashchei. Both Johnson and Thomas Phelan (Kashchei) are strong, strong dancers — some of the best among the best male dancers currently working in the Northwest.

Philip Tschopp conducted the mighty Orchestra Bellevue players, who were hidden upstage behind a scrim until the last movement, and when the scrim went up, the timing could not have been better — I could feel the collective excitement of the audience; it was truly thrilling. (With 50 musicians, this was about the only place in the theatre to have housed them.)

Laura Rodriguez’s piece, The Deconstructed, whose title and content cleverly paired well with the first work of the program, Porter’s It’s Just An Orange Vest, inspired by movement that construction workers tend to make. Rodriguez’s own program commentary notes that her work “is in dedication to the people who risk their lives to build incredible spaces for us.” Rodriguez is currently completing her undergraduate degree at Cornish College of the Arts, and the influence of her teachers is clearly seen and echoed in the motifs she’s given the dancers to do to the incredibly beautiful and romantically potent Mendelssohn score — the String Quartet no 2, op. 13 in A minor. I could easily see how dance department professors Wade Madsen and Deborah Wolf like to move, for example, reflected in the rhythmic phrasing and how these phrases built the dance. I look forward to the growth of Rodriguez’s choreographic voice and where this might take her future work. In addition to Phelan, this cast was supplemented by Tessa Banales, Molly Levy, Ellen Peterson, Julie Heffner, and Tayler Tucker. 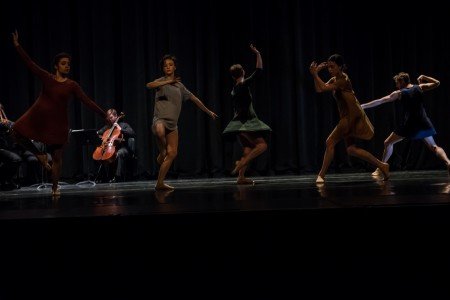 It’s hard for me to believe that Northwest composer Bern Herbolsheimer is no longer with us, after being active on the scene for so many years. Using his 2004 CHILDSWORLD for the opening ballet was a brilliant choice and the perfect accompaniment for Porter’s It’s Just An Orange Vest. Using movement you might associate with construction workers, such as using a jackhammer, Porter put together a dance that was a very good opener — light but with just the right amount of substance and a nice transformation of the dancers into “real” people as they took off their orange vest costumes, and recognizing each other as actual humans and not faceless workers, paired off into groups of happy and apparently, contented, folk, this during the last movement — “childsdance.”

With costumes/wardrobe by Tina Evans and lighting design by Joseph Kendall, City Opera Ballet’s Firebird weekend was one to see. Today, there is a lot going on in the Seattle-area dance scene beyond its large, resident ballet company, PNB, including performances by smaller to mid-sized groups doing excellent work and striving to make their artistic voices heard and expressed. Ballet Bellevue is just one to be celebrated.

Next up for these two artistic entities and their collaboration is La Traviata in August.