As a dance critic with a full time job as a federal government lawyer, I don’t have time to cover all of the dance events in and around Washington, DC. In fact, the dance community in the DC area is so rich, vibrant and active that I miss seeing many high-quality performances. I’m thankful I made time to see the recent performance of CityDance’s Conservatory Dancers, which featured works by CityDance’s talented Choreographer-in-Residence Robert J. Priore, because it’s one I’d have regretted missing.

CityDance’s Conservatory Dancers receive strong pre-professional training. They’re routinely accepted to top summer programs and leading university dance programs, and they’re given the chance to work and perform with professional artists like Priore and his newly-formed company PrioreDance. I’ve admired Priore’s choreography each time I’ve seen it, and it’s exciting that he’s busy amassing awards and honors (in 2015 he was a recipient the John F. Kennedy Center’s Local Dance Commissioning Project, and in 2016, he was named as one of three Level-Up commissioned choreographers at the Dance Gallery Festival in New York City), traveling around the globe to set dances and hold workshops (this year he’s been to both Argentina and Cuba), and presenting work through his own company. Also notable is CityDance School and Conservatory’s top twelve placement at the Youth America Grand Prix Final in the ensemble category for their performance of Priore’s fiery Fuego.

The group dancing Fuego at the performance I attended were striking. They captured not only the rhythms of the music (La Tribu by De La Gurda, arranged by Gavin Stewart), but also the spirit of the music. The young female dancers, in bright colors, were lifted high into the air and found pretty positions, extending their limbs skyward. When the entire group took the stage, there were luscious waves of bodies, of different ages and abilities, but all driven and committed to performing their best. When the dancers shouted at the end of the work, in addition to hearing their elation, I felt it deeply. What tremendous potential these young dancers have! Fuego is a perfect vehicle to show off their optimism and energy. 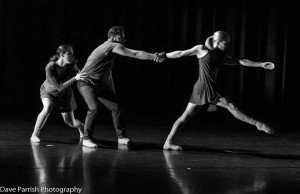 Another student work on the program, Humans, showed off the dancers and their individual strengths well, too. Despite their youth, the dancers tackled the challenging choreography with remarkable carriage and impressive demeanor. These were not woefully under-rehearsed young dancers in tacky sparkly costumes at a year-end recital in which everyone participates. These were serious young dancers who clearly have been taught to aspire to excellence. I saw sparks of great technique, but it was the fearlessness of the dancers and the complexity of the choreography that made Humans successful.

What I appreciate most about Priore’s choreography is that at the completion of a work, I usually feel fulfilled. That he generally wraps things up in a way that makes one sigh with pleasure is satisfying. Trois, performed by Priore, Diana Amalfitano (a CityDance School and Conservatory alumna and graduate of SUNY Purchase with a BFA in dance performance), and Abby Leithart. The trio was magnetic, almost literally. The dancers sometimes leaned into each other as if pulled by a natural force. Shoulders merged together and fused for a moment. I was also reminded of billiard balls and physics. Trois is a study in dynamics. Not only did the dancers crash into each other, they melted, they jerked, they seemed in the grip of something bigger than themselves. The women sometimes used their hands and fists to rattle the space in front and above them, like they were rocking to music and simultaneously turning a dial. Unlike most of Priore’s works that I’ve seen, though, the ending to Trois was abrupt.

The ending to Michael, a duet by Argentine artists Juan Pedro Carrere and Franco Nicolas Mariotti, was jarring, but the build-up to it made emotional sense. I’ve rarely seen such beautiful extended partnering between men. This pair ripped my heart out. The men moved from tender beginnings, running fingers over faces, to aggressive, acrobatic pushes and shoves. Then there were stumbles, bodies careening, the aftermath, perhaps, of a breakup and a subsequent attempt to make up? Intensity dominated Michael. Carrere and Mariotti left absolutely everything behind on stage, and the heartbreak depicted translated clearly and devastatingly.

For Lisa, a solo performed by Alicia Canterna, grabbed my heart, too, but for different reasons. Canterna is a mom. Her dancing spoke loudly, with maturity. She’s no less lovely as a dancer now, and maybe is even better than I recall her being in her younger days. I felt her yearning and saw a million emotions rush cross her face and through her body as she danced. She seemed to be fighting with herself about something. She swirled around into herself and then away. Whatever her turmoil was, whatever the nature of her wounds, her body told the truth of her struggle. Her arms swung, with her head down, sort of like she was swimming against the tide. 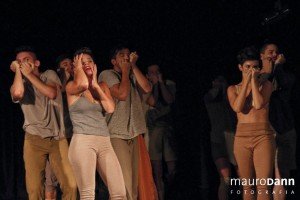 The program concluded with Priore’s Casita, a lively and personal piece that featured professional dancers alongside students. Casita is full of jumps and shaking hips and music (including tunes by French-Lebanese musician Bachar Mar-Khalife and an Israeli pop band composed of three sisters, A-WA) that courses through the dancers and the audience alike. Priore is gifted at choosing interesting, moving music. While Casita is overwhelmingly a happy dance, it’s not all revelry. With a theme of family, of community, there are nonetheless times when dancers are lonely or uncertain, but the focus is on the support that surrounds them.

I saw Ryan Carlough, another CityDance alumnus and graduate of SUNY Purchase, in a performance a week ago, and he stood out to me at that time as a tenacious and beguiling dancer. To the credit of Conservatory Dancers Grace Cho, Jade Diouf, Nicole Liebeler, and Makani Yerg, Carlough did not stand out to me this time. This wasn’t because he wasn’t solidly dancing. The students simply held their own with the professional dancers they joined, and that’s quite a feat. In particular, Cho was radiant. I hope she intends to pursue a dance career. Her solo in Casita was among the most powerful moments of the whole evening. With tiny gestures, surprises, and exceptional emotional depth, Cho mesmerized. A finger under her nose quivered like a butterfly, and later her wrists twisted and melded, imparting another butterfly image. She was commanding throughout her solo, and I can imagine it being a winning audition piece.