I feel lucky to have seen Cloud Gate Dance Theatre of Taiwan’s Formosa. First, I’m thankful that I didn’t have to fly to Taiwan to see it. Second, I understand that Founder and Director Lin Hwai-Min will be stepping down next year, so it’s unlikely that I’ll have a chance to see this company again under his esteemed leadership. His Formosa seems to be not just a tribute to his home country, but also perhaps a tribute to his career, and to life in general.

Lin’s career as a choreographer is something of a surprise. The program notes explain that he’s a writer turned choreographer. In fact, Lin was an MFA student at the University of Iowa’s famous Writer’s Workshop when he was introduced to contemporary dance. It must have made quite an impact on him, as Lin returned home and in 1973 formed Cloud Gate Dance Theatre of Taiwan. His company has a unique voice, mixing Western dance with Chinese martial arts, for example. 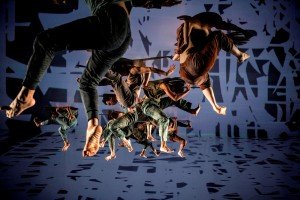 Formosa relies heavily on words and poetry for its inspiration and imagery. It traces Taiwan’s history from the 16th century, when Portuguese sailors upon seeing the island exclaimed, “Formosa!” meaning “Beautiful!” Poems appear on a white scrim above a white floor. In the beginning, the poems are whole. The black Chinese characters are neatly aligned. Gradually, however, the poems slide away and the characters enlarge, slowly disappear, become abstract, pour like a stream, peel away, and break apart. A chaotic jumble appears. To some extent, the writing dances.

The company’s 24 handsome dancers wear simple costumes in faded shades by Apu Jan. Pale bluish-gray, green, and orange are among the muted colors represented. There are some long skirts, shirts, and loose pants in what looks like dyed cotton fabric. A few of the costumes later have an almost tattered element to them, like they’ve got spots that have been shredded. I was reminded of water color paints. 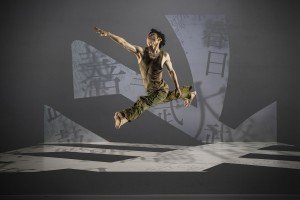 Formosa opens with one dancer walking, who is later joined by others. They casually carve the space, angling themselves in rounded turns, their footfalls audible. The choreography doesn’t seem to enact the poetry line by line (the audience was provided with English translations above the stage). Instead of being literal, the dancing sets the mood and provides a through line for the piece.

The dancers are initially gentle in low to the ground sweeps, their knees almost touching the floor as they bend in wide straddles. There’s remarkable beauty in their pliant bodies. The program credits the company as having martial arts and Qi Gong masters on its staff, as well as teachers of ballet and modern dance. It shows. The dancers don’t wobble when a singl leg is slowly raised above the hip as if, like a coiled snake, it’s about to strike. Their balance, amazing fluidity, and cool composure is ever present and impressive. 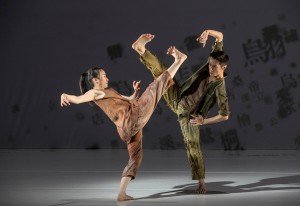 In the first part of Formosa, the precise shapes of the movement pair well against the Chinese characters on the scrim, which also have distinct shapes. A subsequent sequence involves a cluster of men approaching a cluster of women. The men finally grab the women by a hand, dragging them across the floor. It’s a dramatic turn.

Formosa’s tender beginning steadily devolves into what seems to be war. Dancers run quickly, darting here and there, like heavy dashing rain. Then a large group rolls around. A few of the dancers pop magically upward like boiling water. In a solo, a female dancer shivers and shakes, eventually collapsing into a male dancer’s arms. A restless dancer, panicked, is surrounded and swallowed by the others. Later come stomps and violent clashes, even wrestling and flying fists, and you can almost hear helicopter blades circling in the music. The dancers all join in combat as they lunge and pull. It’s a game of tug of war with limbs. 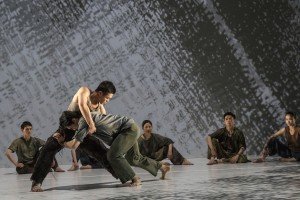 Meanwhile, words on the scrim pile up, their overlapping darkness takes over. You can hear the exhalations of dancers like crickets in the evening. The scrim becomes a starry night sky. Bodies rise from the floor. Those who have risen lend a hand to those still on the ground.

The characters that appear behind the dancers are now white against black. Among others, the character for “love” shows up. So does “rain,” “mountain,” and “forest.” The characters then separate and are ripped apart. The dancers, though, hold hands. At the end, a projection of ocean waves materializes and subsequently abruptly disappears, leaving a single dancer against a blank all-white backdrop, just as Formosa began.
Although I didn’t have to travel to Taiwan to see Formosa, I feel that Formosa took me on a valuable journey. The connection between words, dance, and history is interesting to explore. More than a tale of one country or one man, I think Formosa represents the story of life, with all its ups and downs, its moments of peace and tension.