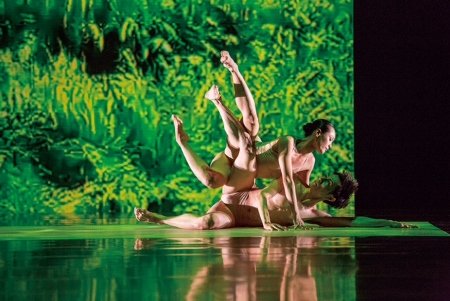 Cloud Gate Dance Theatre’s Rice is a tribute to rural Chihshang in the East Rift Valley of Taiwan, famous for its delicious rice, where farmers have returned to organic farming methods and once organized sit-ins to keep unsightly electric utility poles out of their paddies.  Rice also honors the cycle of life, not only of rice, but of all things in nature, ourselves included.  Against a backdrop composed of stunning images of rice in every stage and season by videographer Chang Hao-jan (Howell), the dancers tell a story of that moves from birth to death and touches upon both sex and war.  Although the bodies on stage sometimes literally depict rice (through them you can see rice sprouting and waving in the breeze), they symbolize very human experiences, too.

In a middle section of the approximately 70-minute Rice, titled “Pollen II,” Huang Pei-hua and Tsai Ming-yuan, appearing naked, curl and twist and climb atop each other in intricate poses.  The human parallel of pollenating cannot be lost on anyone.  In “Grain,” Chou Chang-ning, in a deep red dress, mimics giving birth.  She rolls on the floor, sits wide-legged, and breathes heavily.  In her powerful writhing, one feels anticipation.  In a subsequent section called “Fire,” male dancers with long wobbly bamboo sticks wage battle.  They slap the floor and slice at each other as if fencing.  This dynamic sparring calls to mind war and consequent destruction.  Elsewhere, stomps and hunched backs at the start of the work evoke planting rice, while collapses to the floor show death.  Smoke eerily billows across blackened stalks of rice on the scrim as dancers eventually keel over.  Does someone rise again?  Yes, because that’s the cycle of life!

The visual components of Rice are probably its main attraction.  Sensitively constructed shots of rice projected on the scrim, ranging from extreme close-ups to more distant shots, help to create an emotional component to a grain that holds much less importance in the daily life of most Westerners than it does for many in Asia.  The simple costumes in multiple solid hues (Ann Yu Chien, Li-ting Huang, and the Department of Fashion Design from Shih Chien University) remind me of prisms of light.  These pops of color look lovely against the vivid green, gold, and copper-colored colors of the rice projected behind the dancers.  The music, however, is a mixed bag.  The traditional Hakka folk songs and drumming seem fitting, but the Western opera arias strike me as not only out-of-place, but as begging for drama when the dancing can speak for itself.

The choreography, by Cloud Gate Dance Theatre of Taiwan’s much-touted founder and artistic director Lin Hwai-min, reflects some of the mystery and beauty of the natural world.  The company’s strong and lean dancers are precise and move in a uniform, disciplined manner.  Ballet is blended with martial arts, and surprising fluidity results.  There are plenty of photo-ready moments with impressive poses and formations.  But this prettiness does not always translate into movement that impacts the heart.  The message of resilience is clear, but the energy that emanates from the performance of Rice is more contained than nature often provides.

The National Ballet of Canada: The Winter’s Tale