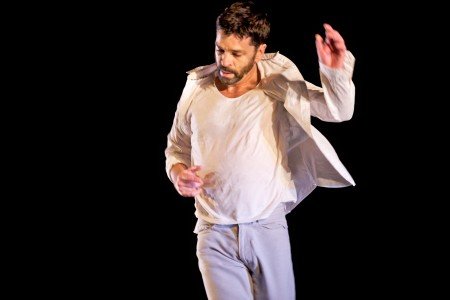 As part of the Kennedy Center’s Ireland 100: Celebrating a Century of Irish Arts & Culture festival, Colin Dunne, a celebrated figure in the Irish step dance community, brought his critically acclaimed solo Out of Time, directed by Sinead Rushe, to a DC audience. In Out of Time, Dunne, not surprisingly, plays with the notion of time. Yet his work does more than simply reflect on the passage of time. Out of Time is intimate and moving. It is part love letter to Irish dance and part history lesson. Dunne’s tremendous passion for traditional Irish dance is contagious. With every joyous bounce and kick, he conveys expertise, fun, and respect for the art he shares around the globe.

The tone of Out of Time is reverent and casual. It’s easy to connect with Dunne and to be drawn into his movement. The pace of Out of Time is of a storyteller — slow and deliberate, with a little held back to whet your appetite for what’s to come. Dunne begins by balancing on one foot. He breaks his dancing down into its most basic elements. As he stretches and prepares for the dancing he will do, the audience catches a glimpse of the exquisite control and endless practice needed to execute this distinctive dance style. Bit by bit, through archival film footage (including a clip from his own journey that began as a child competitor), through text, through humor, and of course, through dancing, Dunne teaches what it takes to be an Irish step dancer. He also teaches how to appreciate the intricate footwork he so expertly performs. 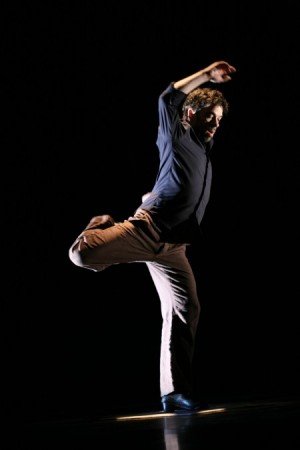 Sometimes Dunne is barefoot, allowing the audience to examine more closely the precise efforts of his feet. Sometimes his percussive steps are amplified by microphones. One gets lost in the patterns of sound emerging. Particularly fast footwork becomes wild applause or a summer downpour, while circles and slides of the feet across the floor sound like blood swishing through one’s heart. Dunne amusingly describes the repeated phrases that mimic the rhythmic timing of footfalls — “rashers and sausages,” a traditional Irish breakfast dish, among them. When Dunne moves in slow motion, manipulating time, one more readily grasps the remarkable fluidity of his movement. Though his spine remains erect, and his arms still, his lower limbs are utterly free.

In the end, Dunne departs from traditional Irish step dancing. His arms do not stay glued to his side like a waiting soldier, they come loose. Earlier in Out of Time, film footage from the 1930s, 1950s and 1970s, shows the roots of Irish dancing. Following this peephole into the past, Dunne ultimately sweeps across the stage with his unique, contemporary twist on tradition. Barefoot again, with an arm triumphantly flying into the air, he is both honoring Irish dance and taking it somewhere new. His dancing speaks volumes, and his tribute is heartfelt.