In this centennial year of the birth of Merce Cunningham, opportunities to see his choreography have thankfully flourished. A few months ago, I saw an Irish contemporary dance company take on Cunningham, and now that the weather has finally started to deliver some fall-like temperatures, I found myself enjoying Cunningham again. The Kennedy Center would have been remiss for not taking part, of course. As part of its celebration, the Kennedy Center offered live performance, film, and even a chance to play among Andy Warhol’s Silver Clouds, large metallic pillow-like balloons. Cunningham worked with Warhol to use the mesmerizing mylar balloons as part of the décor for his 1968 dance RainForest.

Before the performance I attended, I sat on the lawn of the Kennedy Center’s new expansion, the REACH, and watched Cunningham choreography on a large outdoor screen. I caught the end of Beach Birds for Camera, a 1992 film adaptation of Beach Birds by Elliot Caplan. Cunningham’s dancers, made giant by the projection, magically moved before me under the darkening sky, as elegant and quixotic as the birds that inspired them. 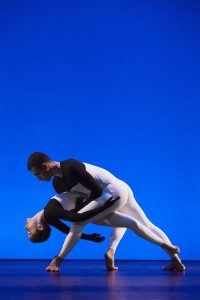 Inside, Compagnie Centre National de Danse Contemporaine-Angers, led by Robert Swinston, a former dancer with the Merce Cunningham Dance Company and longtime assistant to Cunnigham, presented Beach Birds and BIPED. These French dancers, like the Irish dancers earlier in the year, ably rose to the Cunningham challenge. Beach Birds looked just as lovely live on stage in 2019 as it did on film decades before. Indeed, that’s one way to know Cunningham is a master choreographer. His works continue to pulse with life and provide fodder for extended rumination.

Beach Birds, which premiered in 1991, is a lesson in wonder and deceptive simplicity. Eleven dancers in identical white unitards, with a black streak running across the top of the chest and over the arms all the way to the fingers (costume design by Marsha Skinner), alternately move and stand still. They flock, they pull apart, they shake, shudder, and sway and impressively balance on one leg. You can easily see the birds they are, but the work is abstract. Your imagination fills in wings and beaks where there are none. Likewise, John Cage’s Four³ is abstract music that one’s mind converts to the sounds of ocean waves. Four live musicians — Gavin Bryars, Morgan Gott, Audrey Riley, and James Woodrow — expertly performed the intriguing score. 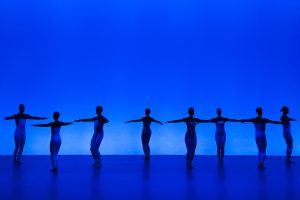 The music is a feast for the ears and the choreography is a feast for the eyes. Together in Beach Birds, they combine to transport the audience. If you’re not at a beach, then you’re at least somewhere with whooshing water and relaxation. As the dancers move, one’s focus changes, zooming in on a delightfully errant foot vibrating, zooming out to see various formations. Dancers join, sometimes in a tight group, but often others are alone at the same time. Given these scattered concentrations of things to watch, it’s impossible to capture it all in a single gaze, and that’s what’s so amazing. Nature works this way. We live in a complex world that we must comprehend in snippets, constantly looking and listening to perceive as much as we can. 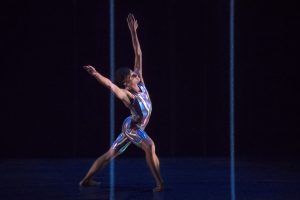 The liveliness of the dancing is birdlike. There are brisk little jumps, small sudden wriggling movements, but also outstretched arms that languorously reach and float. Time slows down as you witness all of this. Cunningham in Beach Birds gifts us surprising beauty.

Swinston’s reconstruction of Cunningham’s BIPED, from 1999, was less successful, primarily because the piece is overly long, and the dancers seemed sort of weary. They weren’t as controlled and precise as they were in Beach Birds. Yet BIPED still stuns and feels vital. 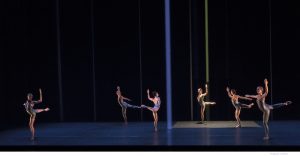 Where Beach Birds is gentle, BIPED launches an assault on the senses. The scenography by Shelley Eshkar and Paul Kaiser and lighting design by Aaron Copp flaunt vivid colors and digital imagery and allow the dancers to fascinatingly disappear and reappear. The costume design by Suzanne Gallo wraps the dancers in iridescent molten silver, later covered by much looser garments. I had the sensation that the dancers were trapped in a neverending screensaver. From behind tilting and twirling beams of light, they maneuver with ferocity, but they regularly appear dwarfed and muted.

After some initial audience oohs and aahs, patrons began to get restless as the work trudged ahead. The atmospheric music by Gavin Bryars, also titled BIPED, doesn’t overwhelm, but the chaotic glowing figures and lines that practically imprison the dancers do tend to smother the choreography. “It’s making me dizzy,” exclaimed someone seated in the row behind me. I felt the same. Whether thick lines, wiry figures, or gyrating clusters, the stuff on the scrim at the front of the stage distracts sand frequently obscures the dancing behind it. Some of the patterns reminded me of a barcode or strands of DNA. Yet the colorful jumbles of light that come and go also enchant. Bouncy dots become champagne bubbles, fireflies, or strings of pearls that the dancers move between. The choreography certainly has satisfying moments, among them dancers walking smoothly backwards and several one-legged moves. BIPED is best when you’re lost in its busyness.